Gather up your “Drugs & Honey” because it’s time to have some fun with some new tuneage from Paper Jackets. The LA-based band just issued their latest single, their first taste of new music since entering quarantine seven months ago. Lyrically, “Drugs & Honey” is more serious-minded, but it’s shaded within the song’s upbeat sound that might cause you to think this is a fun, party tune. The song is about what we do as individuals to mask our pain and the colourful veil which we construct to cover it all up.

This new offering is but a small sample of what’s to follow on the group’s brand new album, Souvenirs Volume Two, the obvious follow-up to Souvenirs Volume One which came out in July. No official release date has been set yet, but expect the record to be coming soon. The album will feature more of the nostalgic alternative rock contained throughout Souvenirs Volume One’s ten tracks.

Like many other rock artists, Paper Jackets lead singer James Mason is a full-on tattoo enthusiast which made him the perfect candidate to speak with for our latest edition of Tattoo Talk. Read on as Mason describes his first tattoo, his favourite tattoo shop, and those tattoos that were just oh so painful.

James Mason: “My first tattoo was in New Hope, Pennsylvania in 2010. I just got the word ‘love’ written on my arm. Sounds kind of cute and clichéd but I just wanted to see what it felt like and things evolved pretty quickly from there. I ended up getting more and more added to that single word with a palm tree and Beach Boys California theme with a pair of sunglasses with stars in the eyes.”

“The first couple tattoos have the most meaning I would say.. After that it was kind of about getting the areas I wanted finished. A dear friend of mine drew one of the first tattoos. It was a lock and key symbolic of my addictive personality and toxic living situation. Our band has gotten tattoos together which I thought was the most meaningful. Even in the most meaningless sessions we’ve found great lessons. Your body starts putting out strange chemicals when it’s under this kind of stress.”

“Oh, yes for sure! So the shop, Tattoo Mania is on Sunset Blvd. of course that seems to be a focal point of my entire existence. Not sure if that’s a good thing always. It has the smell of green soap and subway loafs (because there’s a subway right next door) it’s one of those places you don’t mess around at but I have fully messed around and things have the potential to get dark. The owner is a badass biker dude. I won’t name names but they are a talented group of roughnecks who have beautiful lives, sorted pasts and steady hands.” 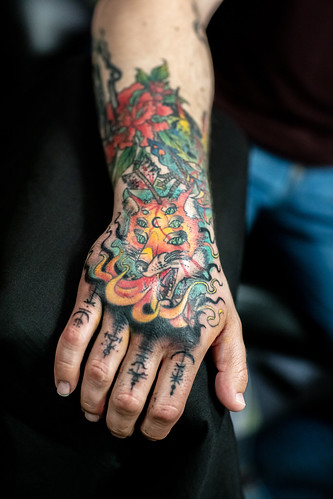 “I honestly want to but I’m kind of taking a break at the moment. I went almost every Tuesday in 2018 and 2019 and sat for hours getting blasted (inked). I think I have something like 400 hours which to some people ain’t shit but for me it’s enough to chill for a little longer. I’m still working on my back which is a tight piece but is a huge area. My left arm is fully coloured, lined, and shaded, both my hands done and my right arm is slowly getting more filled up.”

“Yes, we’ve had fans get lyrics tattooed. I was floored when I saw that. It’s such a personal thing so always grateful to see people taking it in.”

“A lot of things have been drunken (unfortunately) but no straight up joke tattoos. I’ve been on tour and seen band members, not in our band get free tattoos but the only reason it was free was because it was an absolute joke. I remember this guy getting a Bowser riding a Koupa shell (from Super Mario Bros.) waving a Canadian flag. I’ve been in the chair when I guy had asked for the word ‘fuck’ be added to an ex-girl friend tattoo. Like ‘fuck Sara’ or something. Lesson learned .. don’t get women’s names tattooed on you. Or men’s names. I’ve seen a ton of girls get inner lip tattoos which have said all kinds of heinous things. I think for most people it’s a form of entertainment for me it’s more of a lifestyle choice. I know real tattoo artists like being paid but hate dealing with jokers and/or drunk chicks.”

“No… but from time to time I wonder if maybe I should have not gone so heavy into it but I’ve got no hate. Sometimes I see tattoos of a different style and wonder if I should have gone more modern but it’s such a vast artform that you have to be happy where you land.”

“No, I have not.. just touched up a ton of colour and added on! I’ve probably gone over each tattoo four times with brighter yellow, blue, red.”

“The hands are pretty traumatic especially the next day when the swelling starts. I remember that for sure.. Honestly all tattoos are tough.. The most I ever sat for was from 7 pm to 4:30 am. That was hard on the body and mind. Under arms and armpits are shitty. The back is easier but a creeper because it’s such a large area and you suffer quite a bit along the spine. It feels like someone is carving you like a turkey after a few hours. It’s definitely a painful spot. For the record I haven’t cried but definitely yelled out.”

“Elvis Presley or Bruce Lee or John Frusciante because they are pretty badass. Maybe Chuck Norris only if it was he who inflicted the pain.”

“It’s been a mix! Mostly when I can schedule it. We’ve done a lot of Tuesday nights starting at 7 pm.”

“Yeah but it’s personal and I don’t think it would be appropriate to share.”

“Dude, the things I’ve told my hairdressers, bartenders, and tattoo artist… It kind of haunts me to think about it but yeah there’ve been plenty of conversations. Nothing is sacred. I wouldn’t want to traumatize your audience by divulging the details.”