Welsh death metal tyrants Venom Prison are taking a trip into their origins with the release of their Primeval collection. Due out on October 9, 2020, through Prosthetic Records (pre-order your copy here), the album sees the Welsh band revisit their historic material while giving fans a taste of what is to come in the form of a couple of new tracks. Ahead of the release of the album, V13 spoke with Ash to find out what the early days were really like for Venom Prison and how they helped shaped the band into the extreme metal powerhouses they came with the release of their Animus and Samsara discs.

Thanks for your time Ash. How is life treating Venom Prison at the moment?

Ash: “Life is treating us fairly well considering the current circumstance we are in. Everyone’s well and keeping busy behind the scenes.”

The purpose of the interview is around the upcoming album release Primeval – what prompted you to dig into your past?

“I believe a lot of people started listening to Venom Prison and discovered us on our debut Animus or follow up record Samsara. This was a perfect opportunity to give the demo and EP a new life and present it the way it should have been from the start; including two brand new songs post-Samsara gives nods to a possible future direction to come.”

What was it like revisiting those early songs? And listening to them now what would you have done differently?

“I found it quite interesting to see the progression this band has been through in such a short time, there were a few touches we added to Primeval like a lead line or drum fills but the body of the songs still remain the same. I wouldn’t do anything different, to be honest, it was the start of the band’s life in 2015 – even if they’re not perfect, the demo and EP helped us to go forward, sign to a label, tour and release records.”

There was always a healthy underground death metal scene in the UK going as far back as the early ‘90s. How did you get involved in the scene and what was it that drew you to extreme metal?

“Myself and all of Venom Prison grew up listening to metal but we mainly came from the punk and hardcore scene, that’s how we all know each other. I would go to bigger metal shows with my dad when I was younger but I would always attend metal shows if they came through the city I live in. When Venom Prison began, I really started finding out about a lot of underground metal festivals either attending or performing – the metal community was welcoming of Venom Prison. We still play hardcore shows and we play metal shows; it’s what we like and I wouldn’t give up one for the other.”

What do you remember about the first Venom Prison gigs and rehearsals?

“Demo was written before our first practice so it was just a case of hoping everyone had learned the parts and we could just get on with it. Luckily, we did just get on with it, then started playing shows straight away. We spent a lot of time rehearsing to start with, learning the set for live shows, and straight away writing the EP The Primal Chaos – the momentum never really stopped.”

What were your ambitions back then?

“We all came out of our previous bands just before starting Venom Prison and it was a spur of the moment, ‘Let’s try and write a metal demo!’ We did, and realised our passion for doing bands wasn’t over! Then tours, festivals, a record label… all came into place and we decided to give Venom Prison our full attention. The very start was literally ‘Let’s write a metal demo!’”

What about the local Welsh death metal scene when you first started out, what was that like?

“Wales, in general, has always been good for shows regardless of genre. Very lucky to have a solid community of people who care for the bands, shows constantly being put on, small record labels doing tapes for bands they like or their friends. We played metal shows and hardcore shows when we started, both very welcoming.”

Onto your early recordings, what do you remember about the recording sessions? Any interesting stories and how did it feel to have a release out?

“Defy The Tyrant demo was written and recorded in an apartment I lived in at the time, sofa cushions built around the guitar cabs, vocals in a practice room. The early stages in a band are difficult especially when you’re sourcing everything yourself but luckily I had enough equipment to put a demo together. Made some tapes and shirts, 1st January 2015 we started Venom Prison, put music online, shirts, tapes that day to start raising cash to get to shows or tour. This is another reason why we wanted to re-record the earlier material, we didn’t have what we do now and felt those songs deserved more time and quality than they had at the start.”

What about your first ever proper tour. How did that go and what did you learn from it?

“We had done a few short runs, week-long tours, weekenders, and festivals before our first proper tour in 2016 which was with Trap Them; the first day of that tour was also the day Animus (our first album) was released. It was a good tour for us, people attending those tours had either just heard about us and wanted to check us out or literally knew nothing about us so it was great for exposure. We are always learning every tour, even if it’s something little, you pick up new tricks to make touring easier each time or tweaking performances etc.”

From those days your profile has only gone one way, at what point did you notice things change and how did that change your attitude towards the band?

“Animus is the point that I started to notice people were interested. My attitude towards the band became more motivated, more eager to achieve, and to give Venom Prison the time it deserved.”

For fans of the band who’ve only picked up on you in the last few years, what do you think they will get out of picking up Primeval?

“Just a chance to see where we came from and how we progressed with a modern and refined sound. The two new songs on this record are a big part of what’s to come.”

What about embarrassing early band stories? You must have at least one embarrassing gig that you wish you could erase from history?

“Weirdly no, not really! I’ve had shows where things have gone wrong but we’ve all been playing in bands long enough to know that ‘anything can happen’ on stage or on tour! Before Ben and I had amp endorsements we played a festival, I can’t remember where, but annoying things happened like my amp blew, then I was running around looking for someone to borrow an amp to finish the set, and I just see Ben running around looking for an amp as well so somehow we both managed to blow our amps in the first song of a 15/20 min set… it wasn’t off to a great start but that’s one of the problems you encounter being in a band, and it’s about learning how to deal with situations.”

If you took one lesson or piece of advice from those early days that has helped you get to where you are now what is it?

“One thing for me personally, be organised, stay on top of everything. If your band starts to become busier, so do you, being in a band isn’t literally just playing an instrument, so much groundwork gets done behind the scenes.”

Okay, just to finish then, going forward, what about the future and what’s next for Venom Prison?

“Album 3, wait for COVID to settle, tour when COVID is sorted, until then we will keep creating and being as creative as possible in this climate!”

Restrictions permitting, Venom Prison are planning to hit the road in early 2021 for a full UK tour with Creeping Death and Leeched. 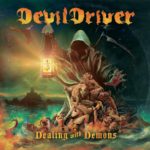 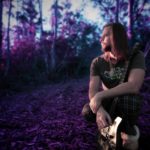