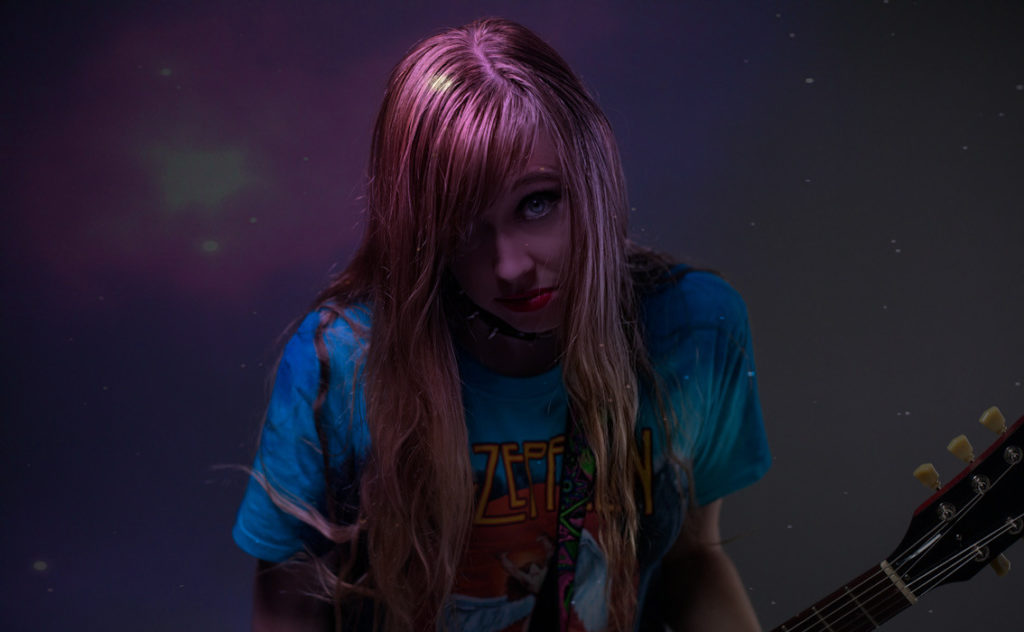 Welcome to the enveloping musical sanctuary that is The Waking Point, the haunting and dark new project masterminded by musician Sadie Belica. Belica is pleased to be releasing her latest EP, Rose Colored Violence, five dark new tracks weaving together her love of heavy acid rock, moody vocals, and orchestral synths.

Out officially on September 11th, she recorded the EP entirely on her own at her own home recording studio in Los Angeles. The enticing new release even features a daring cover version of Nirvana’s eerie classic “Something in the Way,” a complete reinvention of the song that still does the original justice. Lyrically, the EP takes a look at domestic violence, disease, ignorance, and modern Fascism, all performed within a certain mysterious space that Belica successfully taps in to.

With some words on the new EP, Belica said, “The combination of a heavy rock sound with moody vocal arrangements is the overlying theme on the EP. The psychedelic aspect contains an evocative weirdness authentic to my personality and musical spirit, and  channels my biggest inspiration, as I am a self-professed infatuate of Kurt Cobain.”

Originally from Chicago, Belica broadened her musical abilities studying music production and vocal performance at Hollywood’s Musicians Institute. It was there where she began to develop her unique theatrical live performances, taking inspiration from Nirvana, Alice in Chains, Led Zeppelin, Fleetwood Mac, Black Sabbath, Korn, and Alice Cooper. Belica’s first learning experiences with music consisted of teaching herself to play Nirvana covers on guitar while studying for her PhD in Australia in 2017. When she moved to Los Angeles to begin her education at the Musicians Institute, she began to embrace a DIY method when it came to writing, recording, and producing, learning her way through each aspect of the process. Belica’s artist name The Waking Point was influenced by the general public’s resistance towards the threat of climate change and its effects on the planet.

It’s no mystery as to why she decided to cover Nirvana on Rose Colored Violence. Belica very openly admits that she has a healthy infatuation with Kurt Cobain which has heavily inspired the direction she has taken her own music in. Those who still love Cobain, along with the more moody elements of early ‘90s grunge will find a lot to like in The Waking Point, a stirring new artist with a knack for dark, gripping melodies.