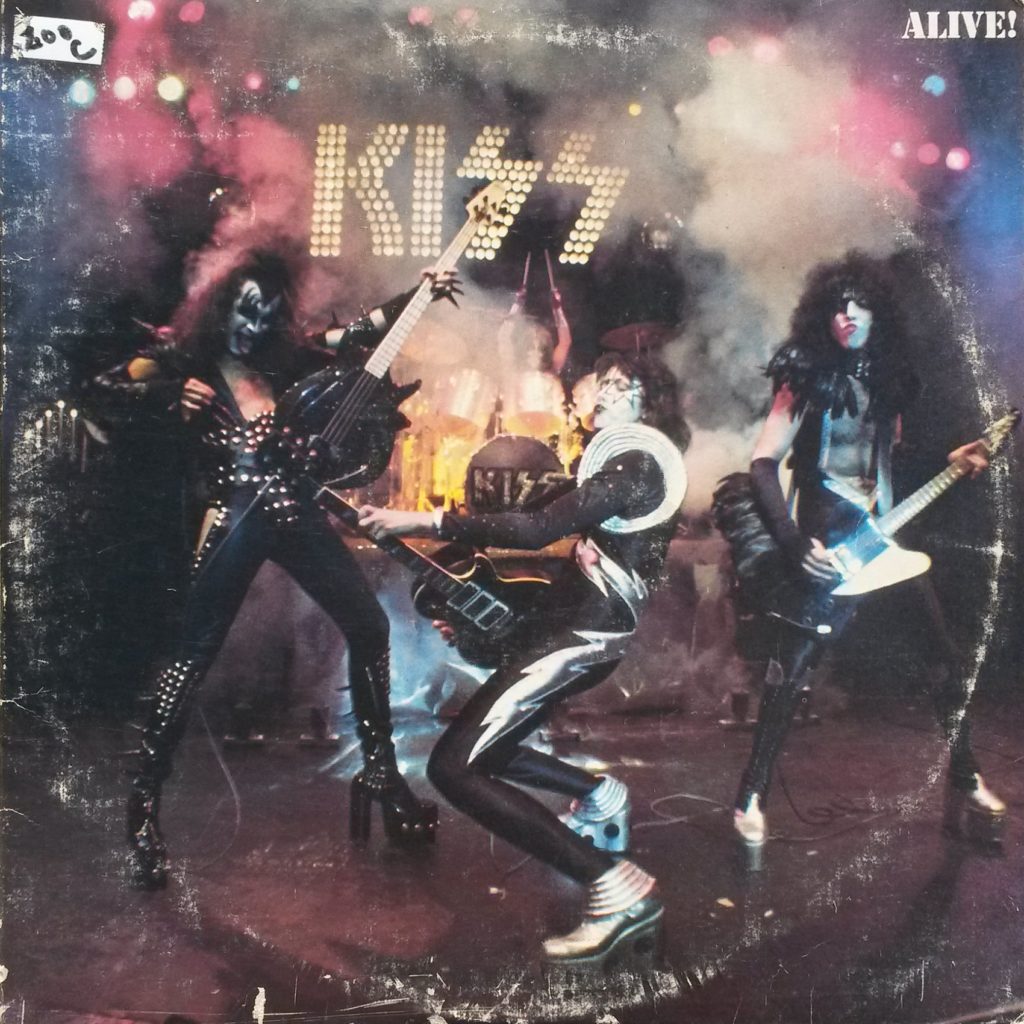 Be sure, KISS did not invent the concept. But they did perfect it — elevating the live album format to an all-new, highly bankable art form. Prior to their iconic 1975 breakout, Alive!, there had been many concert recordings released by a slew of marquee rock artists — Cream, The Stones, The Who, The Allman Brothers Band and Deep Purple, to name just a few. However, following the blockbuster success of Alive!, it became an industry standard, and everybody was dropping live LPs — even pop chart-busters including Barry Manilow and Helen Reddy would soon take a page from the recently-published KISS playbook. And it’s tough to fathom how such soon-to-be superstar artists as Peter Frampton, Bob Seger and Cheap Trick ever would have been rescued from the rungs of mid-level support act status if not for the platinum path paved by Alive!

Stuck in a similar tight spot, the kabuki-faced New York-based foursome also were cash-strapped — struggling since their inception to capture the high-energy of their outrageous concert performances on a studio slab. A live set would provide a golden opportunity to finally accomplish that objective. Plus, a live record could be produced on a budget leaner than a full-fledged studio effort. Alive! was recorded at concerts in Michigan, Ohio, New Jersey and Iowa throughout 1975’s Dressed to Kill spring and summer concert tour.

A KISS concert always has been about living out an in-the-flesh fantasy. Hence, although it’s been revealed in recent years that Alive! is more of a studio creation than a legit live recording, that fun-fact hardly would have made a difference to us in those days — it still doesn’t. As they say, “perception is reality.” And the perception projected by the two-disc onslaught was that we were put front and center at KISS concert spectacle — smack dab between the dazed dude in grease-stained blue jeans, smoking a homegrown fatty and the giddy gal with the great rack and a backstage pass glued to her ass.

It can be argued that Alive! might not have been as impactful if released in today’s super-savvy world. In 1975, the personal concert experience had yet to become tainted by YouTube. Back in them days, our rock and roll perceptions were birthed from our imaginations based on (print) magazine stories and the first-hand accounts of friends who were there. And one’s imagination manufactures way more mystique than the Internet. As a result, Alive! gave even us “sheltered church kids” a ringside seat.

The dark and slightly grainy front cover concert photo fueled our teenage fandom. The personal handwritten liner notes from the band members only enhanced the presentation. The full-color tour-type program included inside the gatefold sleeve offered further “WOW” factor. And the classic back cover pic of the enormous sold-out Cobo Hall crowd summed it all up perfectly — KISS truly was, “The Hottest Band in the Land.”

The 78-minute show, whether staged or not, felt authentic — the performance so powerful, and the songs so compelling, if you cranked up the family hi-fi full blast, sat between the speakers and closed your eyes, you could see the blood trickling from Gene Simmons’ jowls. You could feel the heat of the detonating pyro. You could taste the sulphur clinging in the air. And if you really focused, you smell the three cans worth of Aqua Net required to poof Paul Stanley’s impressive coif to “Starchild”-like perfection.

Musically, Alive! was a magnificent tour de force. From the opening double-whammy urgency of “Deuce” and “Strutter” to the slinky swagger of the siren-screaming “Firehouse” to Ace Frehley’s massive riffage on “Parasite” and the rock-ribbed splendor of “Cold Gin,” the 16-track collection provided the “cream” of the band’s previous three-record “crop.”

Of the many noteworthy Alive! moments, the 12-minute “100,000 Years” stands arguably as the album’s shiniest highlight. Simmons’ bass intro sounded simply evil. Peter Criss’ drum solo would inspire generations of up-and-coming players. And Stanley’s cock rock banter would become the blueprint for untold future frontmen. Nawh, c’mawn. Ah know, if you really wanted to, you could bring the roof down! For his part, Frehley delivers an alien-like performance, including his standout solo at the conclusion of “She” and his masterful intro on “Rock Bottom.”

Alive! also features the Top 20 smash single, “Rock and Roll All Nite.” Accented by a contagious gang-style chorus and punched in the pickle by another fabulous Frehley solo, it was KISS’ first bona fide hit and since has become their signature anthem.

Transformed from the slightly sterile original two-minute studio version to a turbo-charged six-minute showpiece, “Let Me Go Rock and Roll” brings Alive! to a heart-stopping conclusion. And once again, Frehley is “Johnny-on-the-spot.”

For us rock-crazed kids of the mid-‘70s, Alive! demanded our full attention. It still does. While the version of KISS that’s been peddled in recent years certainly is an exciting brand, what Simmons, Stanley, Criss and Frehley created together was pure magic. And 45 years later, Alive! remains unmatched — an exciting celebration — a timeless rawk n’ rawl pah-tay!