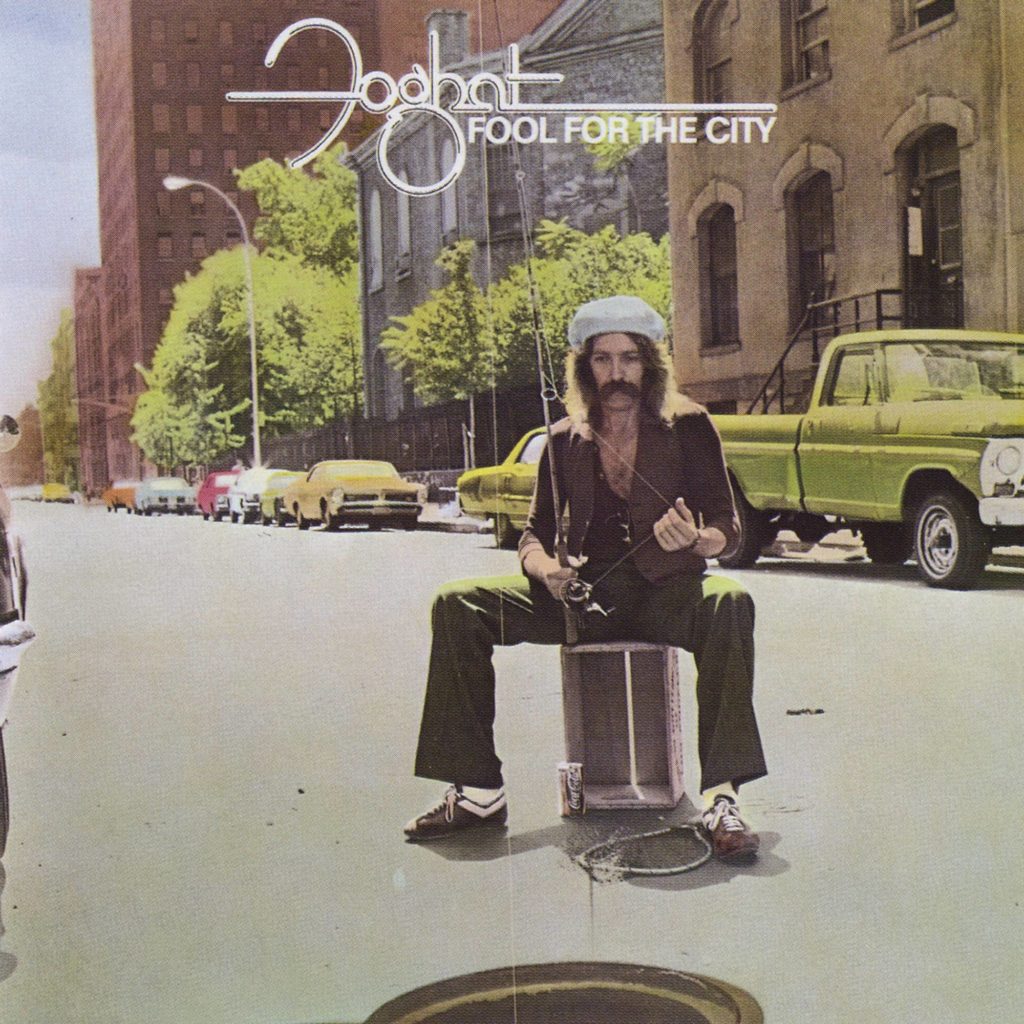 What a peculiar period — the mid-‘70s — particularly for the music world. In 1975, the disco craze was revving up, yet the charts remained dominated by such wholesome, mother-approved pop artists as Barry Manilow, Olivia Newton-John, Donny & Marie and John Denver. Then, Foghat crashed the party. Hey! Who invited THESE guys?

Sporting fabulously feathered, shoulder-length coifs and well-cultivated Sam Elliott-sanctioned staches, the blues-based British boogie brigade burst through the door with reckless abandon. Donning glittery jackets, satin scarves and velvet britches, they immediately sparked a joint, spiked the punch and stuck their fingers in the clam dip. Then they grabbed Olivia, Marie and a bevy of John Denver’s groupies and trotted upstairs for an all-night soiree. Hello, front desk? Somebody just threw a TV out the window of Room 817 — there’s FIVE naked girls in pool — and ONE of them looks like Marie Osmond!

Since 1972, the band had been building a fervent global following with a rapid succession of four impressive, yet modest-selling albums and a fistful of made-for AOR anthems, including “I Just Want to Make Love to You,” “Road Fever” and “Honey Hush.” By 1975, the stage was set for a major breakout. And 45 years ago this week (September 15th), Foghat dropped a doozie via Bearsville Records — the landmark slab, Fool for the City.

Following the late 1974 dismissal of original bassist Tony Stevens, co-founding drummer Roger Earl, frontman/guitarist “Lonesome” Dave Peverett and guitarist Rod Price soon arrived at Suntreader Studios in Sharon, Vermont and embarked on their fifth album — a massive, platinum-selling tour de force that not only has become known for its timeless rock treasures, but also for its famous cover depicting Earl sitting on crate while fishing from an open manhole in the streets of New York.

As a result of his previous Foghat studio work, resident Bearsville Records engineer, Nick Jameson was tapped to produce Fool for the City. The wildly talented 24-year-old multi-instrumentalist also played piano and bass throughout the entire seven-song set. And in short order, he was asked to replace Stevens as Foghat’s official bassist. He agreed to come on board temporarily — leaving his Bearsville gig for one year to record and tour with the band.

“He’s the singular person who has influenced me. I learned a lot from working and playing with Nick. He was a very entertaining and funny bastard. And he had a huge hand in making this record.” -Roger Earl (Sept. 2020)

Punching ya in the privates — pronto, Fool for the City opened with the hard-hitting, radio-friendly Peverett-penned title track. However, it was another selection on the album that truly opened the floodgates and would enhance Foghat’s fortunes forever. Over the years, Ted Nugent has stated that he wrote the “sexiest”  song of all time. That claim can be disputed. While he has written some pretty terrific stuff during his career, “Terrible” Ted ain’t Foghat. And although “Stranglehold” does drip a certain measure of sex appeal, it ain’t “Slow Ride.”

When Earl and Jameson delivered the two-track reel-to-reel master of “Slow Ride” to Bearsville Records, label president Paul Fishkin was less than enthusiastic. “This isn’t a hit,” Fishkin declared. “It’s too heavy. And it’s too long.” Standing his ground firmly, Earl replied, “Fuck you — this is the single!” “But we can’t put out an eight-minute song,” Fishkin countered. “Fuck you — yes you can,” Earl fired back. “Well, can you edit it down?” Fishkin asked. “Fuck you — NO,” Earl maintained. The label ultimately gave in, and soon, “Slow Ride” was released as a single. But to the band’s chagrin, radio stations began editing the song anyway. Jameson eventually embraced the harsh reality and edited the song properly — down to just under four minutes.

“‘Slow Ride,’ like most of our songs, is about sex. The riff was basically a John Lee Hooker riff played in 4/4 and not in a shuffle. That was a big record for us. It still is today.” -Roger Earl (Sept. 2020)

In addition to the classic title track and the signature Top 20 hit, Fool for the City also delivered other soon-to-be fan favorites, including the infectious sing-along, “My Babe.” Birthed from Jameson’s high-octane arrangement, this riff-heavy rendition of the 1963 Righteous Brothers single continues to appear on Foghat concert set lists.

“We used to have lots of fun doing all sorts of interesting stuff in the studio. Actually, we always had fun in the studio.” -Roger Earl (Sept. 2020)

You can even hear the real-life sounds of Earl himself crashing a car into a pile of trash cans during the Jerry Lee Lewis-flavored romp, “Drive Me Home” — a raucous track that was cut in just one take. “The song is all about this chick who’s been drinking and she’s driving Dave home,” Earl recalls. “We went to the top of a mountain and there’s this dirt road with trees, about a quarter-mile up to the studio. We placed microphones all the way down the hill where we had all these garbage cans for me to hit as I’m driving down. I hit trees and garbage cans. I did it twice. But, on the second one, the car caught fire. If you listen, you can hear me crashing into stuff. It was a lot of fun.”

Despite their well-deserved rep as a hard-driving rock band, Foghat always possessed the creative courage to step out of their stylistic comfort zone from time to time and embrace a pure pop song. Hence, the record-closing “Take It or Leave It” is a golden album highlight. Owning a distinctive reggae-tinged bridge, this R&B-inspired gem is a delightful yin to the authentic “Terraplane Blues” yang.

In 1975, Fool for the City demanded and attained worldwide attention as a scrappy, exciting and important new release. Today, it still stands tall on a shortlist of the all-time greatest rock records. In sum, even after 45 years, you know the rhythm is right.

*Much thanks to Roger Earl for taking the time to share his myriad personal insights and reflections regarding Fool for the City. Our entire interview will be the basis for my in-depth 50th Anniversary Foghat feature — coming soon to V13!

Fool for the City Track Listing: