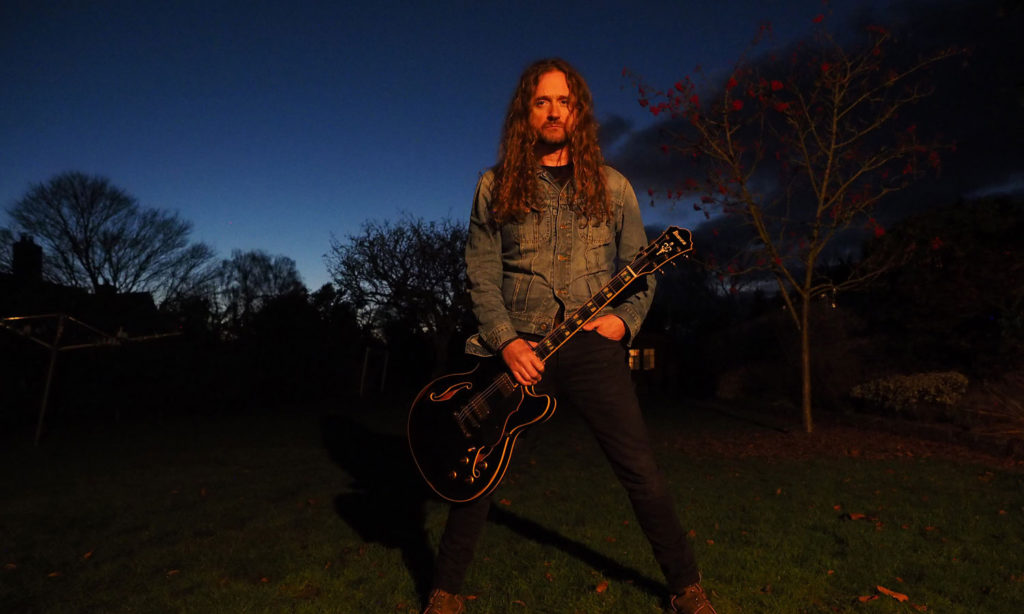 Rock superstar Jon Bon Jovi once sang the line “I’ve seen a million faces and I’ve rocked them all.” Over in the UK and now thirty-five years into his career, nobody could begrudge Wayward Sons / Little Angels frontmanToby Jepson from boasting “yep, me too” given that the much-loved UK rock favourite still packs out venues wherever he performs.

Having just reissued his Ignorance Is Bliss album and with thirty-five years to delve back into, we sat down with Toby and spoke about lessons learned, some of his favourite memories and why he thinks the UK rock scene never reached the levels of popularity enjoyed by their US counterparts.

Toby, thanks for your time. How is life treating you at the moment ?

Toby: “I’m great thanks, the worldwide reaction to the pandemic has made me take stock of my life and reinvent myself so it’s been a period of real challenge for me like I’m sure it has for everyone, but doing ok so far. Looking forward with enormous optimism for the future. Humans are often at our very best under pressure to change and I’m no exception.”

With nearly 35 years in the business, it’s hard to know where to start. How does it feel looking back and thinking about 35 years ?

“I’m still the same person I was when I picked up the guitar for the first time, that’s my biggest achievement as far as I’m concerned. I’ve written hundreds of songs, performed thousands of live shows, toured all over the world, released albums, and worked with some of history’s greatest acts. I feel privileged and grateful for the opportunities I have had. I’m an artist and as such feel that my job is to create art for others to enjoy, and the fact that I am still able to do that at 52 years old is astounding to me and I’m enormously pleased that I am able.”

You’re celebrating the 25th anniversary of the Ignorance Is Bliss album, what plans do you have to promote it ?

“Hard to say at the moment, it is a commemorative release intended to celebrate that period of my life. I play lots of the songs live as an acoustic artist but it’s unlikely I’ll tour it with a band, although there does seem to be some demand for that so I’m not ruling it out.”

And what about going forward, Wayward Sons put their album out last year, any plans for a third album ?

“Yes, we are recording it as I type this interview. We will be touring in the UK next year – if we are able and the conditions are OK to return to ‘normal’ live shows – and also lots of festivals to get the band back out there. We were very lucky to tour in Jan/Feb with Steel Panther all over Europe and that was fantastic, but we are now waiting for the pandemic to abate so we can get back into live playing. I certainly won’t be touring until we are back in the venues with an audience as it should be.”

Okay delving back into your career now, was there a particular band or album that really made you want to follow this path ?

“Queen and David Bowie really. Specifically ‘A night at the opera’ became my touchstone record. Watching Freddie perform and hearing that album was like a bolt out of the blue. But it isn’t just Queen, hard rock, punk and the new wave play as much of a role. I’m a lover of songs first and foremost so my growth as a writer and performer was influenced as much by Elvis Costello as it was by Ronnie Dio and Black Sabbath. My biggest single hero and role model is Bowie though, specifically the album Hunky Dory which I believe to be the greatest album ever made.”

You’ve had plenty of ups and plenty of downs during the 35 years, let’s start with the ups. Tell us about some of your highlights?

“Where to start! Selling out a local show in Scarborough, opening for Guns N’ Roses at the Marquee in 1988, selling out the Marquee club as a headline act, getting signed to Polydor as young kids, making albums, selling out our first city hall tour including Hammersmith Odeon, touring with Van Halen, top 40 hit singles, a number one album in the UK, playing Wembley Stadium with Bryan Adams, selling out the Royal Albert Hall, the instant positive reaction to the firs WS album, touring with Saxon, becoming a DJ for Planet Rock, WS playing Download in 2018… I could go on…”

What about the low points? Have there been any points where you’ve wanted to throw in the towel? What keeps you going ?

“Many times. I was massively disappointed by the first release of the Ignorance Is Bliss album, I was let go by my manager at the time which left me floundering and out of my depth. I was stressed for years and suffered as an artist but suffering is ultimately what gives you a reason to continue. I have never been a quitter and the times that I was out of the game were the toughest of my life. Once an artist, always an artist. Once a writer always a writer. It bubbles to the surface and it’s impossible to stop, so you have to find a way to continue despite the often total lack of interest by others. You have to grow a thick skin and maintain your focus. A lot of my drive comes from a place I don’t understand though, it exists in the ethereal and the mystical realms and I mean that. I wake up with songs and stories in my head with no understanding why, it then becomes impossible to ignore them. Artists are vessels of the Unknown.”

Singer, frontman, solo artist, producer, are there any other roles you’d like to try?

“I’m currently working on songs for a kids musical film and also creative writing has become an emerging string to my bow. I’m sure to write two screenplays and my autobiography which is consuming a huge amount of my time. I’d like to end up writing and directing my own dramatic fiction.”

Throughout the ups and downs, you’ve always had a solid fanbase who’ve been with you every step of the way. How important has that been and are there any particular town or cities where you can’t wait to perform when the tour dates are being booked?

“As I’ve said many times, the single biggest reason I continue to work as an artist outside of my need to write and perform which is a very personal thing is the fans. I would not be here if it wasn’t for their attention and loyalty. It makes me very emotional when I think about it tbh. There are people I’ve known all my professional life that are still with me, still spending their hard-earned money on my shows, records and merchandise and doing so with a smile on their faces and love in their hearts. It is quite simply breathtaking. I love playing anywhere that will have me, but what is nice that I will always recognise certain faces in the audience no matter where I go. Amazing actually.”

Going back to the Little Angels days where you got your big break. Any regrets? Anything you’d do differently ?

“We grasped the bull and rode that sucker all the way. I wouldn’t change a thing in terms of our evolution, I would however have sacked a few people along the way that had a hugely detrimental effect on us as people. Hindsight is a wonderful thing though…”

Over the 35 years what is the most important lesson you’ve learned ?

“Two stark truths: Nobody knows anything, as soon as a rule in this game is established it changes. Nobody knows what a ‘hit’ is and the business is a by-product of others’ talents and not the other way round. A posh suit and a fast car don’t give you qualifications to dictate how a band’s career should be formed, the music does. The music is the only thing that matters, songs are the single most important thing. It should be a ration of 99.9% songwriting and 00.1% everything else. True.”

You’ve now got your own studio, how is that going? Have you been working with any acts recently that we should be looking out for ?

“I have a small studio in my home now and use a studio in Worcestershire when I produce. I try not to bring my work home if I can help it, although through the pandemic lockdown our house resembles a TV and recording studio!!!”

The UK rock scene had plenty of great bands back in the late 80s and 90s but never made it as big as the American rock scene. What do you put that down to ?

“To answer it I’d say, the dominant forces of the US labels and the weight of the wealth played a huge part. It’s ultimately a moot point because so many factors added to the reasons why including and probably most importantly the quality of the songs. Again.”

So, just to finish. Thanks for your time again. 35 years in, we’re in some crazy times, where do you hope the next twelve to 18 months takes Toby Jepson ?

“I remain optimistic and believe in the continued power of music as a force for good. I’ve never been interested in fashion or what’s ‘cool’ for me that all bollocks, the fans decide and that shall be the whole of the law. My Patreon site has just launched and is doing great so far so I want to continue to build that as it gives me the freedom to pursue every burning desire I have for the arts, and 18 months is a long time and so anything could happen. I’m hoping that at the very least I’ll still be making and performing music one way or another. I also hope my first film project will come to fruition.”