If their recent output is any evidence, then it’s a certainty that Static Cycle has got the “Power.” This fast-rising Alaskan trio has been enjoying a string of success lately, thanks to the release of some well-received singles including their latest, “Power.” It, along with “Boxes,” “Ringer,” and “Wolf,” showcase a more developed, honed-in sound for the band, one that is more polished and displays top-level songwriting.

More than just musicians, Static Cycle pay very close attention to the visual accompaniments that go along with their songs, with these videos combining to form a six-part series that feature some stunning visuals which, together, tell a grander story. This story is all leading towards an incredible live experience (when it’s possible again) that will act as a hybrid of hard rock, live theatre, and Cirque Du Soleil.

To speak more about this merger of sound and visuals, we caught up with frontman Jared Navarre for our latest edition of UnCovered in which he discusses the “Wolf” single artwork, working with designer Alec Strickland, and how the whole cover creation process went down.

What was the inspiration for “Wolf’s” cover artwork?

Jared Navarre: “The Wolf is one of the main characters in our live show. Though he’s been present in our other videos, this is the first song from the Wolf’s perspective. When discussing designs, it was really important to play off the geometric designs of our paper-made video series. We wanted to keep the design simple and iconic.”

Tell us about the artist you collaborated with and how you found him/her?

“Our go-to, one of the greatest designers in rock, Alec Strickland, created this art. Alec is great and really creative and works alongside Kaby Gilley to create stunning visuals that help the band tell the story of the colorful and chaotic world we’ve built alongside our newest songs.”

“They do everything in Photoshop and Illustrator, sometimes stuff starts as head sketches too.”

“The visuals for this album will move from the music videos to the live show, so we’ve put a lot of thought into the creation of the characters. Most of the visuals took a ton of time as we went back and forth, but this one was different because Alec had initially created the sketch of the Wolf as a look for merchandise. Then we knew we had this colorful and stunning music video that showcases a neon city, so Alec took his original sketch then brought it to life with the same buzzing energy as the video.” 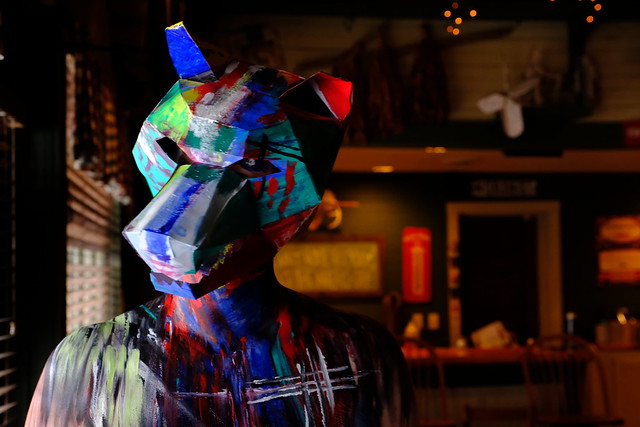 Would you consider Alec and Kaby additional band members in a sense, or someone contracted for just this piece?

“Because the visuals are so important, Alec and Kaby have a huge role in bringing the characters to life.”

Did Alec and Kaby hear the album beforehand? Or, what kind of input did you give them?

“Definitely. We make sure everyone hears the music and gets the vision before they get to work.”

“Nirvana’s Nevermind. You know the answer on whether the music lived up to the cover.”

“When someone clicks on our single, we have two seconds to convey the story through picture. Album artwork is as important now as ever. It may only be digital but it’s always beside the music.”

When people look at the cover artwork, what do you want them to see/think?

“Mystery, rage, style, danger. The buzzing neon sign is meant to welcome you but it also has this association with nightlife and temptation, and that push and pull is all part of the song, ‘Wolf.”

“They are completely different mediums. Some art can translate to both, but honestly, I think the art has to be created purposefully to exists as either.”

“Absolutely. The Wolf is a major character in the narrative of this album and in the live show. The Wolf, and all it stands for, which for us, is ‘necessary evil,’ is a theme across the whole album.”

How do you think the art will affect the listener’s perception of the music?

“It’s cool as fuck. Anyone who doesn’t like the art isn’t allowed to listen to the song.”