While the world is busy having an off-year, Rarity is flying higher than ever before. The Hamilton, Ontario quintet have been enjoying the most significant success and notoriety of their young career, largely thanks to the release of their sophomore album, The Longest Lonesome, one year ago via Dine Alone Records.

Since its release on August 30th, 2019, the album has been streamed over one million times on Spotify alone and the band has shot three music videos for the singles “I’ll Come Around,” “Shawinigan,” and “Drown Me Out.” The group has already delivered on new music with the recent release of “Worn Down” last month, a harsher-toned track about relationships and the pain that comes with feeling damaged. Formed in 2014, it didn’t take long for the industry to start taking notice of Rarity with their debut EP, Alive In Your Eyes, being released the same year on Rise Records. Their debut full-length, I Couldn’t Be Weaker, soon followed in 2016 along with tours with Silverstein and Seaway.

Like so many post-hardcorers, Rarity like a little ink to go along with their punk rock. We’re talking about tattoos which are aplenty on the body of guitarist Corbin Giroux. We recently spoke to Giroux as part of our Tattoo Talk series in which he describes all of his favourite tattoos, his number one hometown tattoo shop and artist, and that damn drunken joke tattoo that he once got.

Corbin Giroux: “My first tattoo was done right after I turned 18 in Hamilton. It’s actually a Real Friends tattoo on my leg and took about 45 minutes. It didn’t hurt as bad as I thought it would so I thought all tattoos didn’t hurt that much after getting my very first. I was very wrong.”

“Some of my tattoos have meaning, many do not. I have a tattoo for my dog, my grandmother and my stepmom. Aside from that, there’s an Alexisonfire tattoo, a Real Friends tattoo and the rest is classic Canadian and American traditional designs.”

“Ninety-five percent of my body has been tattooed by Jon Gray at Trophy Tattoo in Hamilton. His Instagram is @sour_jon and you should get tattooed by him.”

“I’m probably going to get more work on my leg done in September or October. I started right before the pandemic, and don’t really get tattooed in the summer so come fall I’m sure we’ll make more progress on my leg!” 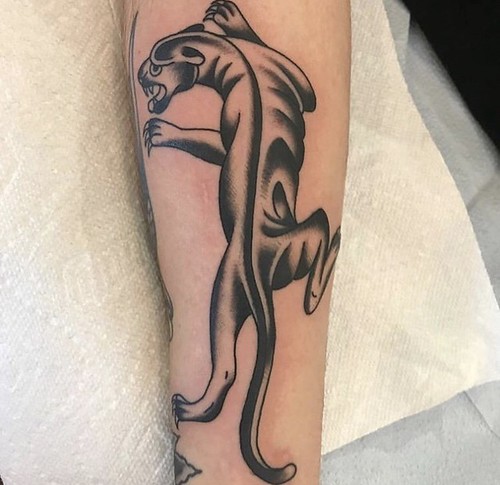 “I used to play in a band called Downstream and a few people got Downstream tattoos which absolutely floored me. I’ve seen Rarity tattoos too and it never gets any less special every time I see more people making that move. I feel very honoured to be a part of something where people connect with it so much they want to have a memory of this band on them forever.”

“Alright, alright. So when I was 18 I was completely sober and got my old Twitter handle tattooed on my ass (laughs). It took about two and a half American Football songs to complete and I couldn’t sit properly for two weeks. I’ve never really been inebriated when going to get a tattoo before, but when I got my chest tattooed I did smoke before because I was really nervous.”

“I don’t hate any of my tattoos, but I do have some that have been reworked. I got my dog portrait from a guy who was drunk this one time and it did not look like Maggie at all. That got touched up a few years ago and I like it now. Aside from that Jon Gray touched up a rose that the drunk guy also did on me when I was 18 and didn’t know where to go. Since discovering Jon, I don’t even want to go anywhere else.”

“All tattoos hurt, plain and simple. The only tattoo I cried during was my chest piece and that sucked so much. Aside from that, the ditch of your arm (other side of your elbow) is probably my least favourite spot.”

“I’d probably never get someone’s face tattooed on me unless it was like a classic lady head design or my dog but if I had to pick, I would pick Jane Austen.”

“I never get tattooed in June, July, or August because I like to swim. Sometimes I’ll have it planned out in advance, sometimes I’ll show up to the shop and we’ll decide what we’re going to do the day of.”

“Nothing too crazy, but on Rarity’s first Europe tour I got a tattoo. It was sort of an ode to the overall experience and one of the only tattoos I have that Jon Gray didn’t do.”

“The most personal it ever got was probably getting the Maggie portrait reworked. I didn’t want to confide to much to the drunk guy and Jon and I normally just shoot the shit (laughs).”