We are turning up the temperature today as we unveil the glistening new single from Chicago’s own Oddysseys. The band has altered their course with their brand new song “Body Heat,” a real change of pace as compared to their debut full-length album, Odd Behavior, that was released in April 2019. A very forward-thinking group of musicians, the quartet is helping to define a new wave in the punk underground motivated by their love of classic post-punk and goth punk.

Odd Behavior was a perfect statement to the world of just what Oddysseys are striving towards. Their dream-pop and angst-ridden sound is one that is destined to stand out amongst their peers as a style that is hard to mimic in any meaningful way. It’s a versatile style of music that would resonate just as well with the college rock crowd of the 1980s or the college rock crowd of today. It’s a smoothly composed combination of classic elements and modern sounds that carries wide appeal.

Regarding “Body Heat,” the band explained the context and motivations behind the writing and recording of the song. “Our upcoming single ‘Body Heat’ marks a new direction, as our forthcoming project will embody the pent up energy and anticipation that has built over this period of quarantine and rampant social injustice. Combining the elements of ‘80s post-punk with punchy post-rock production, we wanted to be louder about how we feel and not beat around the bullshit.”

Originally from Boston, Oddysseys are a close-knit bunch who all attended university in Los Angeles together before making Chicago their new home. It’s been a busy year for the band since the release of Odd Behavior with a lot of new music both released and in the works. Their With You EP was just released in June, preceded by the release of the singles “Goon” and “Testimony” last December. It’s all been a massive step forward for the band since they first emerged in 2016 with the release of their Odd EP. The release of Odd Behavior saw the group embark on a tour of the northeast where they consistently burgeoning crowds typical of a band starting to make some noise on the indie circuit.

More than just a musical act, Oddysseys go to great lengths to assure a multi-media presentation of their work with bassist Paul DiRico overseeing the direction of all of the band’s music videos. DiRico was instrumental in producing nine videos, all for the tracks that appear on Odd Behavior with the first video “Breathe With Me” debuting earlier this month. Simultaneously paying tribute to the innovators of post-punk while pushing the genre forward, there’s a lot to like about Oddysseys. 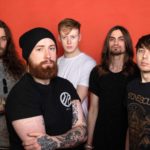 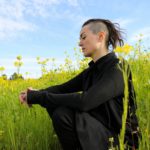