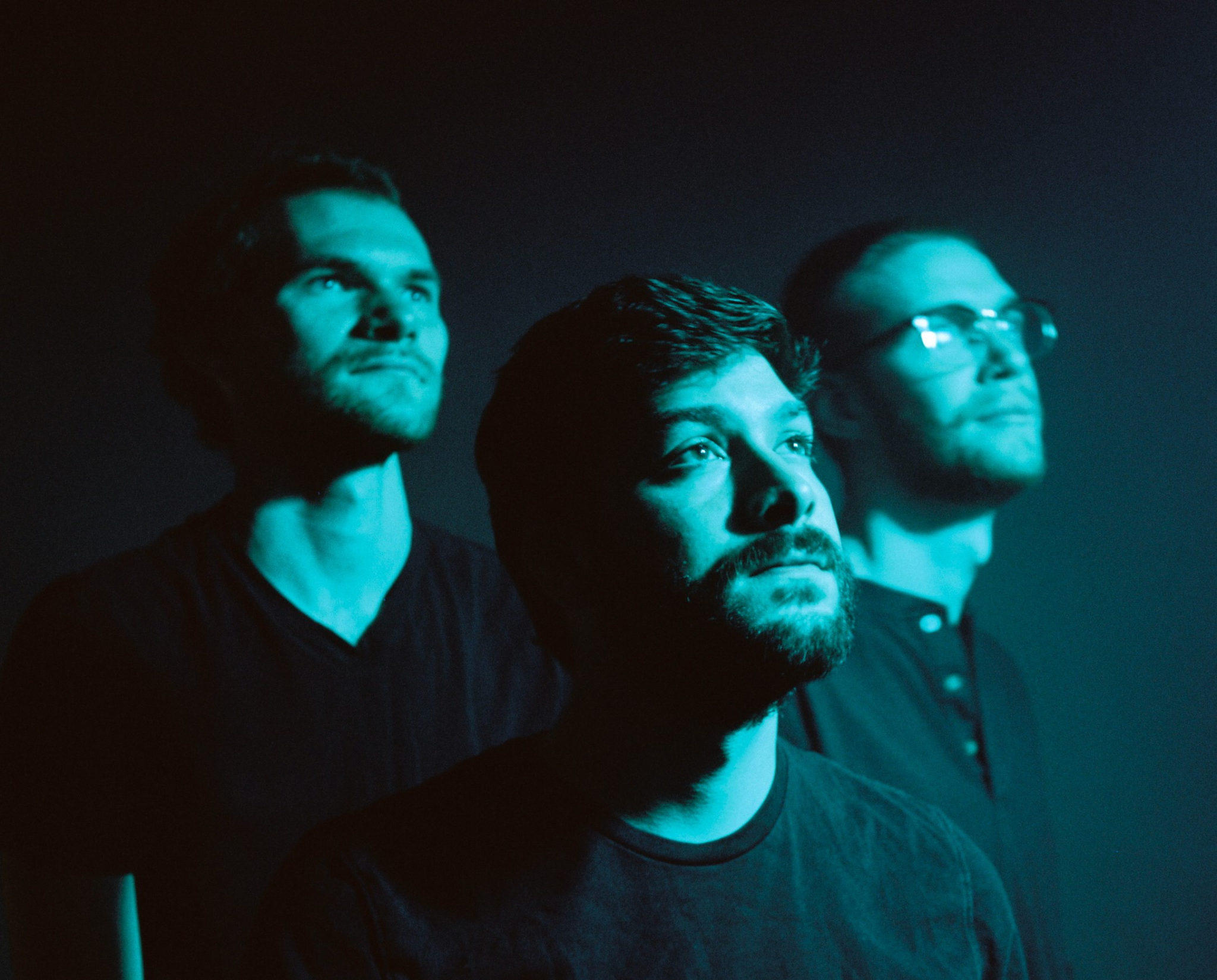 It seems only fitting and oh so logical that great new music often originates in Music City, USA, aka Nashville, Tennessee. Our latest exhibit to back up this assessment is the indie rockers known as Safari Room. The band has been emerging, as of late, as one of Nashville’s most dynamic and intriguing young acts, with an indie rock sound comparable to The National, Death Cab For Cutie, Grizzly Bear, and Fleet Foxes. Their indie is of the experimental variety, defined by ambient soundscapes, complex rhythmic structures, crunchy guitars, and thoughtful, reflective lyrics.

Despite now calling Nashville their home, each member of the trio hails from three very different U.S. cities, Omaha, Nebraska, Dayton, Ohio, and Newark, New Jersey. They recently released their debut album, Look Me Up When You Get There, on July 24th, recorded earlier this year in Nashville with producer Paul Moak.

To get up to speed on all things Safari Room, we spoke with lead singer and guitarist Alec Koukol, about the band’s recently released new single “131,” their debut record, and the competitive musical space that is Nashville, Tennessee.

Congratulations on the release of your brand new single “131.” Tell us a little bit about the process of how this song was written and recorded.

Alec Koukol: “Thank you so much! We’re excited for folks to have their ears on this tune. ‘131’ is a little bit of an old song for me. It’s been sitting in sketchbooks for over five years, but it finally felt like the right time to dust it off and record it properly. We tracked this song at The Silent Planet in Nashville. It’s the same studio where we recorded Actual Feelings, our EP years back, so it felt right at home.”

“Young Water’ was a blast to release. It’s by far the poppiest of our catalogue, so perhaps a little left field for our sound. Our fans really rallied around it, nevertheless! The music video we released alongside was also a huge hit, seeing the band in a Village-People-esque state and dancing in the streets.”

What can you tell us about Look Me Up When You Get There and the process behind it?

“It’s a culmination of everything Safari Room has done since the beginning of the band. We’ve been working on the record for the last two years, and we couldn’t be more proud of the result. Even prouder of the reception thus far!”

How would you describe the sound of the album for those who haven’t heard it yet?

“Melancholic Positivity’ or ‘a deep dive into trauma, guided by ambient guitars, rhythmic motifs, and a soft-smiling guide who tells you ‘it will all be ok in the end.’ The latest singles act as sonic and lyrical bookends for the record. Most everything off of Look Me Up When You Get There falls somewhere between the two. It deals with lots of heavy emotions, but it’s an assurance that there’s a light on the other side, an understanding and reverence for the struggles we endure.”

What has the recording process been like for the album? Did the current pandemic made it difficult for you to record and complete the record?

“We were actually fortunate enough to have finished the record back in early February. So it was in pocket when quarantines and other safety precautions were put in place.”

With a debut album now here, you probably had some touring lined up or at least some shows in your general area. Were you forced to cancel any shows related to your new music because of the pandemic?

“Yeah, we cancelled about 30 confirmed dates across the U.S. and tossed plans for another 15 to 20 dates that were in the works. Our release plan remained the same, but the tour dates would have been scattered throughout the release cycle.”

Generally, Safari Room has an identifiable indie rock sound, but it’s hard to come up with a comparison for another band you resemble. Who has been a great influence on the sound and style of Safari Room?

“Death Cab For Cutie is a big influence, and we (and our fans) find that’s the easiest band to compare ourselves to. However; The National, Grizzly Bear, and Elbow are big inspirations for the songwriting and sound of Safari Room.”

It’s obviously extremely well known that Nashville is one of the most active music scenes in the United States. Would you say it’s been a challenge to get people locally to get on to your music considering how competitive the scene is?

“Absolutely. It often feels like everyone in Nashville is either in a band, works with a band, or is a songwriter. Music is truly in every nook and cranny, the pond is huge, but it’s also filled to the brim with fish. Because there’s so much music, and a ton of great music at that, it is difficult to get recognition within the local scene. But with all worthwhile endeavours, it takes time. And that challenge influenced our decision to tour aggressively and build up a following outside of Music City. That way we can continue play as much as we like to and grow Safari Room on a larger scale, rather than solely focus on the Nashville scene.”

Each of you come from three different cities across the U.S. What made you decide on Nashville as Safari Room’s home city?

“We all came to Nashville to attend Belmont University, where we studied music. We met in college and ran in similar circles, but it wasn’t until after college that Safari Room really took shape. And it even took another year to get situated with our current lineup.

All that being said, Nashville is a great city, full of creative minds, and that has improved Safari Room tenfold. We have access to beautiful studios and are friends with wonderful people who have helped give us the space and resources to make Safari Room what it is today. Nashville is also a great geographical center for a lot of regions we tour!”

Obviously, there is a lot of uncertainty for the future with regards to the music industry and specifically live music, but what are Safari Room’s tentative plans moving forward for the rest of 2020?

“Yeah, times are strange, but we are trying to remain positive about the future of the music industry as a whole. There are so many differing opinions on when shows will be safe again, but the fact remains, live music will be one of the last things to return. In the meantime, we’re going to continue to share our new album with people and get to working on LP number two. We’re in the demo stage right now, and it’s thrilling to be back at it.

We also have more music coming out before 2020 is over, along with our Safer at Home Sessions we post once a month. The latter have allowed us to clothe our songs in different garments and do a little more with less. Definitely keep an eye out for all of that!”