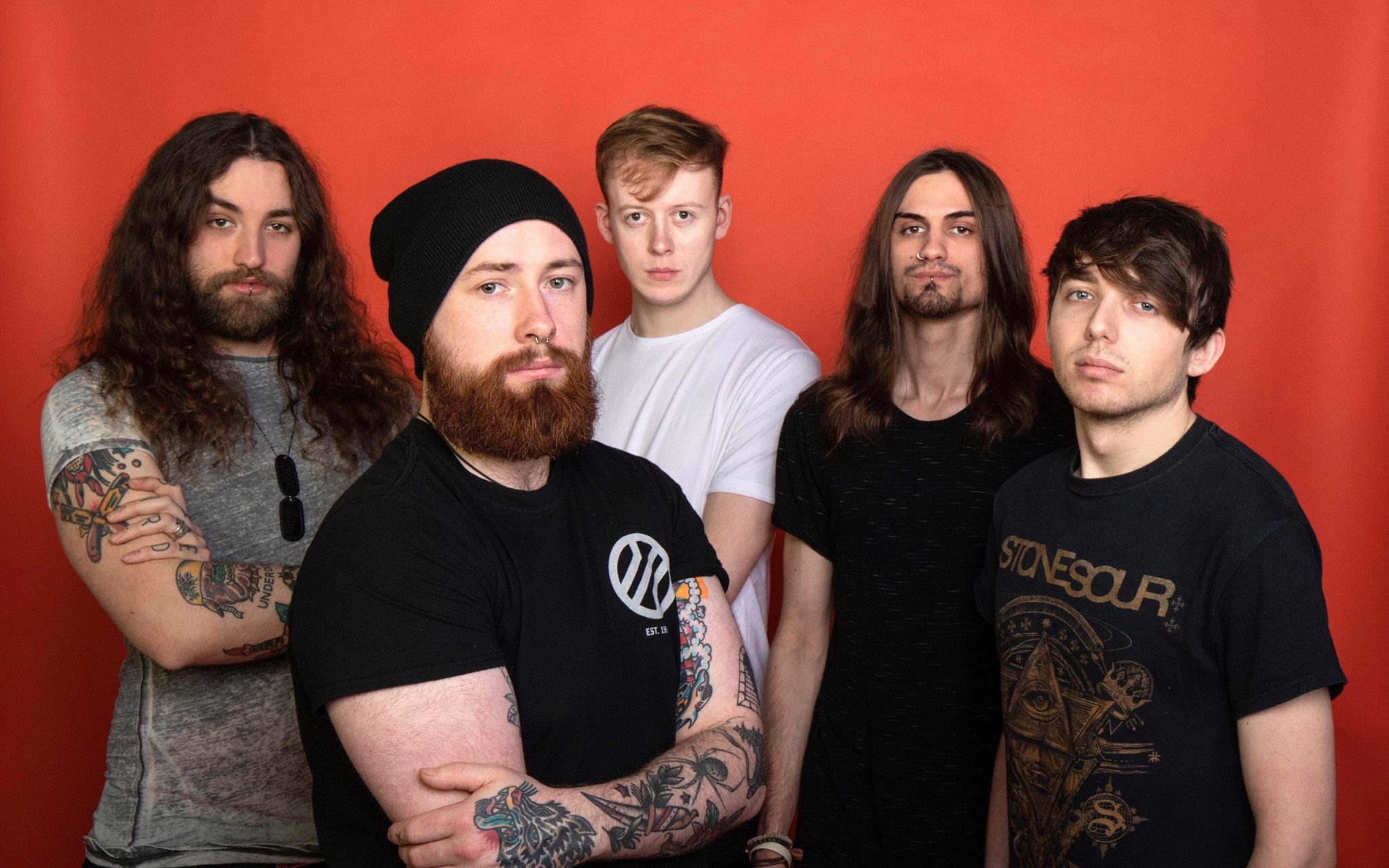 Irish alt-rockers Jet Fuel Chemistry concoct energetic tunes with melodic vocal hooks, socio-political under/overtones, and raised-fist-inducing metal leanings; it’s precise and anthemic, with a hot-as-hell burning point. Their new five-track EP, Sign of the Times, dropped back on August 7th via Jet Fuel Records, and it continues the band’s trend of blistering, thoughtful tracks that easily get you moving. The themes are heady, but the music is sharp and approachable. The tunes hook you in, and then the vocals make you think.

Because these lads pack so much into each song, it seems like the perfect opportunity for the band to break down the meanings of the five entries on Sign of the Times. So let’s welcome Jet Fuel Chemistry’s bassist Lorcan Macken to the stage. He probably won’t headbang and jump around as much as usual, but he’s more than happy to comply. Check out the tunes below and allow Lorcan to take you on an atomic-level examination of Sign of the Times.

“I’ll get right into it. It was 2018, me (bass), Dan (vocals), and Danny (guitar/production) had travelled to Northern Ireland to a mate’s new studio space (shoutout to James ‘Jam’ Duke) to get drunk and try to fix the writing in this demo that we couldn’t get right. Eventually, we hit on that ‘caught in a wave’ hook and then it all came together really quickly. I love the tune, to be honest. Y’know, as of right now, it’s our most popular song, and I’m glad that the sort of fun, bouncy feeling I get playing it seems to translate to the listener. Friends, some casual rock listeners, and some avid metalcore aficionados have expressed that they can really latch onto the vibe. The message of the song is pretty self-evident.

The powers that be often suppress those who speak out for change, pitting the masses against each other by presenting binary solutions to complex issues. We’ve been asked a lot which issues the song specifically speaks to, but, really, answering that would miss the whole point of the song. Instead, I’ll refer you to a fantastic episode of It’s Always Sunny in Philadelphia where Danny DeVito’s character Frank has control of the finances of the bar where the show is set, and every time the bartenders approach him to find out where the money is being spent, he slides a new issue onto the agenda – ‘Do we slice the limes thick or thin? Should we have a crucifix in the bar? How bloody should it be?’… The issues change, but the politics don’t. Seems there’s always a reason not to hold those with power accountable.”

“‘Sleep’ almost didn’t make it to the EP actually; weird, given it’s been the favourite of a few reviews. Danny had been sitting on the riff for a year, and I was always afraid to ask him if we could poach it for the band and stick a really airy melodic chorus on it (as there was originally a much more pop-punk feel). There were no vocals written until maybe two-ish weeks before mastering. I was on a bus somewhere in Dublin and Dan just sent me a text and said he had hung out with Danny for the day and had tracked some rough vocal ideas.

I listened to the song right there on the bus, and, honestly, I was so chuffed that I don’t think we ever touched the recording again, it didn’t need anything else but some mixing, so that’s all we did. Dan’s vision was really cool, he wanted to address the exacerbation of mental illness and the prevalence of identity politics as more of the Irish social life has shifted from reality to social media. To me, the shining moment of that song is the breakdown section. Our drummer Ross didn’t start playing double-kick until recently, and it was partially because he wanted to be able to accent the dakadada parts on guitar in that section. He did an incredible job in such a short amount of time.”

“On to the title track. It’s the only song on the release I wrote on my own, and I was so worried people would get the vibe of this song backwards. I wasn’t sure how I felt about it during production because it was the most middle of the road rock song on the release, so I wrote the lyrics specifically to make myself enjoy the song and to make its place on the EP feel justified. The concept was that if we’re gonna release an EP where we comment on the state of the world – because Jesus Christ is it in a state – our own flaws have to be a part of the conversation.

The song is written from the point of view of a guy who’s obsessed with pointing out hypocrisy and self-obsession all the while contradicting himself by talking like a self-obsessed hypocrite. That’s us, that’s also you; it’s everyone. The Greta Thunberg quote is there to illustrate an example of our collective shortcomings, i.e. sometimes we can’t see to the heart of a message because we’re too eager to critique the way it’s presented to us; we’re all high-and-mighty dickheads from time to time. Again, this isn’t a problem unique to any political class, it’s a universal flaw in organised society. I still don’t understand why a load of grown men thought it was okay to shred a child into meme-oblivion for making use of a platform she earned to emphasize a message that excludes nobody on this planet. If I really think about it, ‘Sign of the Times’ is about accepting that we all kind of suck.”

“The penultimate track ‘Fever’ is an interesting one because I think it’s the most indicative of where the band is headed creatively. We really used this EP to test out a lot of different sounds, just to see if we could pull them off, and ‘Fever’ in some ways ended up being the least safe but, at the same time, the most uniquely voiced. We wrote the whole thing months before the Covid-19 pandemic, and I think the basic idea was to contextualize fear as a highly contagious disease.

Instrumentally, the song was mostly me (I write most of the early demos on guitar) and Danny aiming to show off our guitar chops as best we could. That riff took me days to nail down, and, around the same time we wrote it, our bass player left the project. I spent months teaching that riff to prospective bass players and nobody came through. Eventually, our good mate and now guitarist Ed Orr volunteered his services if they were ever needed, and I’d spent so long teaching the riffs on bass that I actually grew to prefer bass when jamming with the guys, and that was mostly because the ‘Fever’ riff is so chonky. We welcomed Ed on board, and I’ve been laying down the low-end ever since.”

“‘Use Your Eyes’ is just this really angsty, anguished djent-lament that serves primarily to showcase Dan’s vocal talent. The riffs are really fun to play and I think Danny and I had been dying to gig a hardcore-style breakdown for years. There are a lot of great bands playing metalcore/rock crossover stuff and although there’s no shortage of anthemic choruses, it’s rare that a song comes through with a properly filthy bridge and breakdown the way you’d like. I can shamelessly admit that my agenda in studio was to have a Linkin Park type song that crosses into the territory of Knocked Loose and gets away with it. I love the scene’s recent brand of dark, huge-sounding emo tunes, but I get disappointed when they don’t delve as heavy as their subject matter warrants, so we had a go at it ourselves.

The lyrics in this one reflect our disappointment with the world we’ve inherited, and the negligence and abuse perpetrated across generations of Irish people past and present. I won’t go too far down the rabbit-hole here, but Covid-19 has shone a light on issues like appalling treatment of asylum seekers, overcrowded housing due to outrageous rent costs, poor working conditions in low-paid jobs… ‘Use Your Eyes’ is a dramatic send-off for the fairytale notion of Ireland, as well as a send-off for the record itself.”