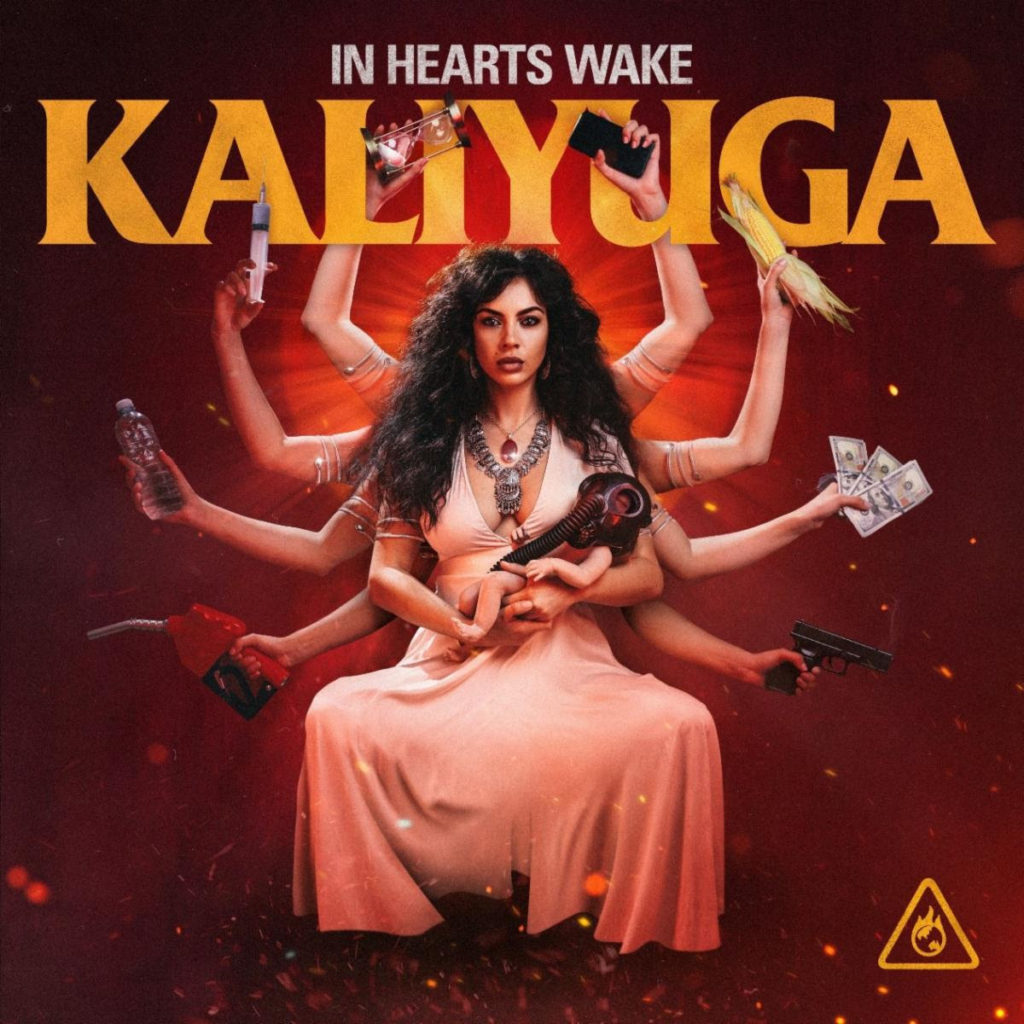 In Hinduism, Kaliyuga is the fourth and present cycle of the world, often referred to as the dark age due to its predominant traits of discord, destruction, disease, greed, cruelty and fear. Kaliyuga is also the fourth and final album of In Hearts Wake’s concept cycle through the elements, and the Fire theme is tragically appropriate timing given the devastating Australian bushfires of earlier this year.

Hailing from Byron Bay, this melodic metalcore band have always defined themselves by their ecological message, which reaches its climax in Kaliyuga. But with Australia, the heartland of modern metalcore and deathcore, can In Hearts Wake stand out from an incredibly strong pack (Parkway Drive, Northlane and Thy Art Is Murder to name but a few), and can the music stand up to their message?

In Hearts Wake have thrown any notion of subtlety out of the window with this album; from the gaudy cover art with the Indian goddess holding a gas-masked baby and armed with the weapons that modern humanity uses against itself (money, drugs, plastic, guns, petrol..); to the Greta Thunberg samples in opening track “Crisis”; to the self-explanatory anthem “Worldwide Suicide.” And that’s undoubtedly intentional because theirs is a message that needs to be rammed down people’s throats. The sense of climate urgency is overwhelming, and incredibly infectious. With song titles such as “Timebomb” and ominous final track “2033,” the listener is left with an urge to do something. And the message is more than a gimmick because In Hearts Wake are true activists. They calculated the carbon footprint of the entire album production process and pledged to offset it, and they have also produced and packaged the physical copies using plastic-free, recycled materials.

Metalcore is often accused of being unimaginative, but it’s clear from the outset that In Hearts Wake were not planning to stick to the metalcore formula with Kaliyuga. The first two tracks are characterized by Prodigy-style ‘90s breakbeats which are completely unexpected. Things do settle into more traditional metalcore – growled verse, clean-sung chorus, breakdown etc – but they do this exceptionally well, and the band are also to be applauded for their experimentation. There are synths, elements of nu-metal, even rap… but fortunately, the underlying heaviness always returns. Three tracks feature guest vocalists, the best of which is “Hellbringer” with Jamie Hails of Polaris. The variety doesn’t always work; “Moving On” and “Crossroads” (featuring vocals from Australian actress Georgia Flood) are more like pop-rock tracks that detract from the album’s overall vibe – although it could be argued that they bring a more personal perspective to the ecological message.

In Hearts Wake are a band at an exciting stage in their sonic development. They are at their best when they are at their heaviest, and there are some huge moments on this album. Most notable is the anthemic “Worldwide Suicide,” but “Hellbringer” and “Force Of Life” also have fantastic riffs, and “Dystopia” and “2033” are massive tracks with which to end the recording. There are also some beautifully poignant lyrics, such as “I’m the son of a witch you failed to burn.”

This nightmare of a year has meant that, in order to keep going, bands have had to draw deep on their reserves of creativity and ingenuity. In Hearts Wake have blazed a trail in this regard, their brave approach to ecological music production perhaps ushering in a new gold standard for the music industry. They have held self-isolation cover competitions for their fans, organized socially-distant tree planting, made animated videos… and make sure you check out the sinister website they created, House Of Kali, to accompany the album. Activism and huge metalcore anthems – Kaliyuga is a powerful addition to 2020’s heroic music releases.