Today, we’re here to shout the name of progressive heavy metal band Pyramid Theorem. The group is totally psyched to tomorrow be releasing their brand new album, Beyond The Exosphere, which surpasses their previous recordings in every relevant respect. The songwriting is more sophisticated and diverse and the arrangements are more memorable and original. It may only be five songs in length, but it’s essentially the length of an LP, thanks in part to the near eighteen-minute title track!

To more competently take that next step in their songwriting abilities, the band worked with producer Rich Chycki who’s worked with a long list of Rock & Roll Hall of Famers, including Aerosmith, Rush, Def Leppard, along with Dream Theater. This marks the first time that Pyramid Theorem has used a professional producer which has helped raise the technical quality and focus of the record.

It only takes one listen of Beyond The Exosphere and Pyramid Theorem’s previous releases to realize what an outstanding group of musicians these four young men from Toronto are. That’s why they made for the perfect interview for our latest Geared Up in which we spoke with keyboardist and guitarist Stephan Di Mambro about his love of the Korg Kronos keyboard and musical work station.

Stephan Di Mambro: “I have recently been using the Korg Kronos for just about everything I do.”

How did you come to possess this Korg? Vintage shop, regular shop, borrowed money, gifted. Give us the details…

“Well… I had taken my Roland keyboard into the studio to make this latest record and it decided to crap out on me the first day we were there. I had been playing with the Korg at the local music shop for a couple of weeks but couldn’t justify emptying my bank account on it until this moment. So I made the purchase.”

What made you choose the Korg and were there any close seconds or alternates?

“Honestly, no. I will go and play everything in the store and whatever instrument can keep me there the longest wins. The weighted keys feel great and the sounds already programmed in are top-notch.”

What about this Korg makes it so important to you?

“It’s the hub for all my other equipment. Everything is routed through the Korg. I have it set up as a mixer for my software synths as well as some hardware synths. It also acts as an effects unit for certain sounds from other synths. The routing capabilities are endless really. Makes everything work together seamlessly.” 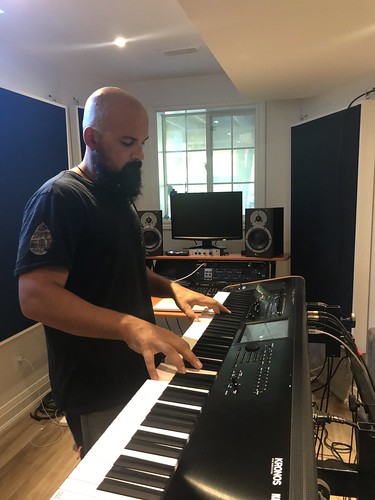 Did you use this gear during the recording of your latest song or album? If so, please elaborate on how and for what parts.

“Yes, I did. As previously mentioned I had purchased it while we were in studio and had to figure out how to program on it as soon as possible. I used it pretty much everywhere but the thing that stands out for me is the lead tone. The amount of processing and effects that I was able to add to that tone enabled me to shape this dirty gnarly wah sound that I tried to make feel like a guitar as much as possible.”

“We are definitely a plug and play band. No click, no tracks no nothing, just four guys and a rock show.”

We know you love the Korg, but are there any major cons? (You may also list the pros.)

“Um, I haven’t really found any cons other than loading your own samples takes longer than it probably should in 2020. But I kind of feel like every keyboard has this issue.”

How easy is it for you to tweak the Korg and get the tone/sounds you need?

“It’s very natural programming on the Korg Kronos. Like I said I was kind of thrown into the fire with this thing and had to recreate some sounds that I had on another machine as soon as possible. Everything feels laid out where it’s supposed to be and the order of things just makes sense. I can’t really say that about some other manufacturers.”

How does the Korg hold up with regular touring and gigging?

“I haven’t had the chance, unfortunately. But there are a number of people that use it so I’m not too worried.”

Do you have a backup for your Korg? If so, what?

“Yes, my backup is a Roland Fantom. I got it repaired when we left the studio and I think my brother has it at the moment.”

“(laughs) Gear goes wrong!? How about after a gig I was tearing down my rig and decided to take the bottom keyboard off the stand before the top one, sending the top one flying off the stage into the first row of people. Thankfully nobody got hurt because the show had ended and I think I needed to replace a jack or two on the back of the keyboard. But I felt pretty dumb…”

Any final thoughts or comments on the Korg?

“I can’t tell you how excited I am for all this COVID stuff to be over so I can bring this thing on the road and play some tunes. Rockin’ out in my basement is alright but it just doesn’t cut it.”