We have a rising star on our hands with Des Rocs. The musician has just released his brand new single “I Know,” along with the accompanying music video, which has quickly become his most popular release to date. A truly independent artist who plays by his own rules, Des Rocs is on a quest to bring rock n’ roll back to the people with his highly original mix of out-of-tune-guitars and a wave of distortion unlike anything you have ever before experienced.

He has thus far released an EP and routinely drops standalone singles as quickly as he can possibly record and produce them. As a live performer, Des Rocs has already become highly respected, receiving recognition for his hardcore intensity. He has already opened for The Rolling Stones, played shows with The Struts, and has been a featured performer at Lollapalooza.

Aside from rocking out, Des Rocs also likes to enjoy a good meal. We spoke with him for our latest edition of Art of The Meal to discuss food on the road, writing music in coffee shops, his favourite hometown restaurants, and of course, pizza.

Des Rocs: “Man, eating on the road versus eating at home couldn’t be more different. On the road, the food philosophy is kinda ‘whatever, wherever.’ You never know when your next meal is coming, and it can be a little too much brainpower to seek out a healthy choice when the tray of macaroni and cheese is steaming right in front of your face in the green room. I start each tour being Mr. Optimistic, setting sail from each venue like some explorer in search of El Dorado after soundcheck. But, by show 26, I’ve got my head in that steamy tray of macaroni and cheese like a pig at a feeding trough. At home or in the studio? I’m obsessed with the fresh market in union square. I’m there probably three times a week with a PBS tote bag and my pup like some 82-year-old New Yorker from the upper west side. I eat a healthy breakfast and lunch, and my mentality for dinner is, whatever happens, happens.”

“I could write a Tolkien trilogy about my favorite spots in New York City. A few that spring to the top of my skull in this very moment are: Noodle Pudding in Brooklyn Heights, Tacos El Bronco in Sunset Park, Malaparte in the West Village, Paulie Gee’s in Greenpoint, Essa Bagel, Di Fara in Brooklyn, and the Sophie’s Cuban in downtown Brooklyn (not the other Sophie’s, they’re not as good).” 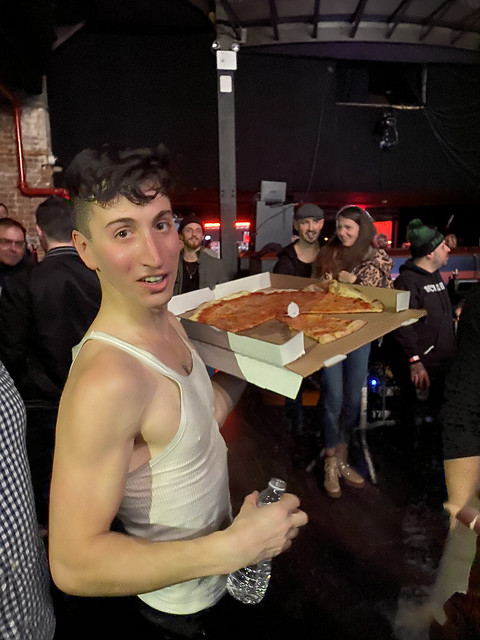 Do you have a favorite “food city” when on tour?

“Seattle, 100 percent. Seattle is the one city where I experience flavours and dishes that I’ve truly never tasted before. Also, at Pike Place there’s this dried goods stand I’m obsessed with, it’s perfect for loading up on tour snacks. They have these bags of dried garlic cloves and I pop them like grapes. Every time I get my hands on one of those garlic bags the rest of the band and crew are mortified. You never know what’s going to happen physiologically after consuming 100 garlic cloves in 24 hours. It’s always a different outcome and for that reason, the Seattle shows are total wildcards. I feel like some kind of bull deity pulsing with the energy of the universe on those Seattle stages. Must be some combo of oysters and said garlic. Love Seattle.”

“The rider is a home for practical bites, bites you can throw in a van after the show, discover under the seat next to a dirty sock a week later and still be excited to eat. Nothing fancy lives on that rider. It’s a whole lot of chips, nuts, Budweiser.”

If a fan were generous and were to give you a food or drink-related gift, what should they get you?

“A pizza pie, to me, is the greatest gift one human can give to another. A lot of filthy animals get pumped to show me their favourite pizza spots when I play their city and hand me a pie the second I get off stage. I love getting to try all the different spots that way.”

“I write a lot in coffee shops. Coffee is a huge part of my life, and there’s such little room in my apartment to work on anything where the coffee shop is really an escape for me. I’ll sit in the back of Think Coffee at 123 4th Ave and write for hours. Something about asking a complete stranger to ‘please watch my laptop’ for 30 seconds while I go to the bathroom as fast as I can defines me (or at least used to).”

“In New York City. The almighty grill is so hard to come by, but I escaped the other weekend and did my first and probably last barbecue of the season.”

“I’m all about making pizzas on the grill. Paulie Gee’s (the slice shop, not the restaurant), sells the best dough. A few months back I bought a big ball of it and one of the guys there messaged me the most meticulously incredible directions on how to make pizza on the grill. It was amazing and perfect in every way.”

Did you have to overcome being a picky eater?

“Oh no not at all. I love trying everything. I’ll try anything once.”

“I always start plain when trying a new place. It’s the only way to judge a new spot. After that, I want to know what that place thinks are its best toppings. I love mushroom, but if the joint isn’t really hyping their mushroom then I don’t go for it. I’m a firm believer in ordering for the place you’re in. I can’t stand when we’re in a diner and someone orders the salmon. You gotta order a dish at a diner that a diner does best! That was a long way of saying that I don’t really have specific go-to’s…”

“I think Geoffrey Zakarian is the man. When he first started coming on Food Network he was this ‘I do whatever I want’ prick. He made the most delicious food, was so unfriendly and just dominated all the competitions. Then I think Food Network tried to cool him up and make him hip and friendly. One time someone on the show referred to him as G-money or something. He’s no longer my Geoffrey.”

“(laughs) Yes. That thing was a mess. I’m super impatient and would always try to clean it while it was still red hot. What a disaster.”