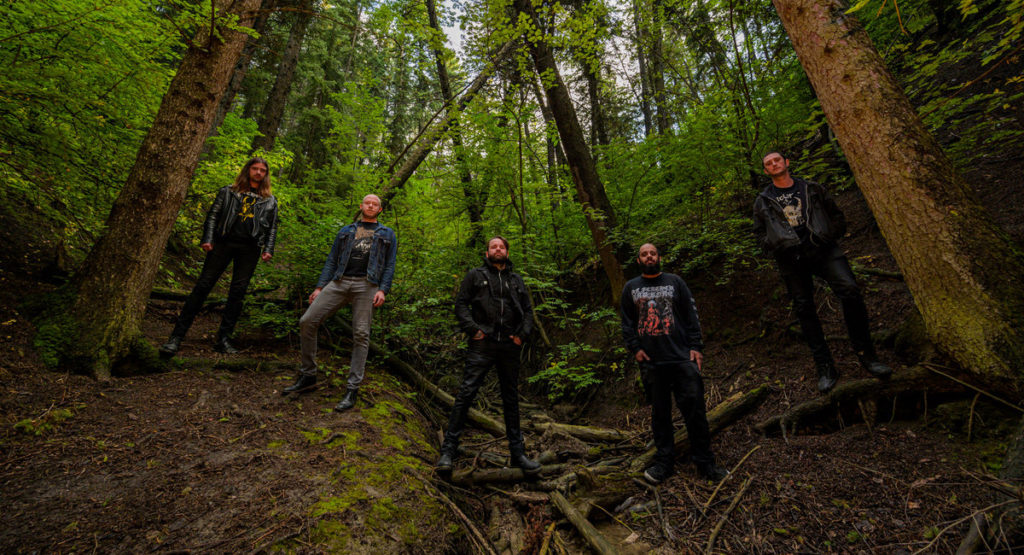 As a music fan there is nothing more rewarding than finding something new on an album every time you listen to it. One album that does that is Devouring Ruin, the latest offering from Calgary band Wake. A dense, suffocating, multi-layered blast of grindcore and black metal, Devouring Ruin explores both personal trauma and wider subjects so we spoke to guitarist Arjun from the band to discover more.

Thanks for your time. Let’s talk about the new album which dropped earlier this year. It reads like the material is written from a personal perspective and is there a theme running through your albums?

Arjun: “Absolutely, Kyle Ball our singer wrote the lyrics based on his personal experiences. Devouring Ruin isn’t explicitly linked to prior albums lyrically, however both Misery Rites and Devouring Ruin touch more on personal issues, so there’s a bit of similarity there.”

You talk a lot about personal defeats and turmoil, is performing in Wake a form of therapy to cope with those periods of your life? Does it take a traumatic event to trigger writing a song?

“I feel as if everyone in the band has some aspect of personal turmoil and, yeah, performing these tracks and letting people know that we all suffer from similar issues is therapeutic. Some tracks are broader in subject matter, and others are based on specific events. Kyle, our singer, would be better equipped to answer that.”

Lyrically we’ve talked a bit about where you draw inspiration but what about musically? Is the emotion inspiring the lyrics the trigger for the ferocity in your music?

“A lot of the music is written first, Kyle will be there during writing sessions and will kind of interpret the music as he hears it. When we write the riffs and arrange them, we can already feel what type of message or vibe the song will be conveying.”

And on an emotional and physical level how much does it take out of you performing these songs?

“As a guitarist, the music is definitely very physical. There’s a lot of full-speed tremolo picking of full chords and that can get pretty tiring whereas I came from a background of more riffy kind of single-note picking death metal where you can’t hit too hard on your strings, this is way more fun. We’ve definitely added a lot more dynamics to our riffs as the music progresses.”

Would you say Wake is more of a band to be experienced on your own in a particular setting rather than in a shitty bar?

“We play a diverse array of venues when on tour. Playing a 500 capacity room or a basement definitely changes the experience, but I still love the feeling of doing both, every show is unique. That being said, obviously, when people can hear everything we’re doing, the music is easier to absorb.”

Given the ferocity of your music, how does it feel performing the songs live especially to an audience who might not know who you are or understand the emotion in your music?

“Even if the audience doesn’t immediately pick up on lyrics or concepts, I think the musical side of it speaks for itself. People are free to interpret our music as they please.”

You’ve released an album pretty much every two years since 2016, is that a conscious thing or just luck?

“Definitely not on purpose. We like to keep busy with writing and touring and so it just sort of works out that we release an album, do a couple of tours and then do the next one within a year or two.”

Although the album has just come out, how much inspiration is the current pandemic having on your thoughts about future material?

“The pandemic has created some new and interesting, as well as exacerbating old issues such as wealth inequality, authoritarianism, and healthcare. We’ve always been a band writing about the darkest of subject matter, and there’s no shortage of that right now.”

How challenging on a personal level are you finding the restrictions of the lockdown? What about the rest of the band?

“Personally, I’m a bit of a hermit so the lockdown hasn’t been too hard on me. Our jam space is nice and spacious so we’re able to social distance while jamming which is great. We’re starting to get a second wave here in Calgary, so hopefully, people continue to take it seriously.”

Finally, thanks for your time, on a personal level, what are your hopes and aspirations for the future?

“I hope to see the day where rationality prevails over fear, and I hope one day we’re once again able to view the future as potentially better than the present instead of being on a downward trajectory.”

Devouring Ruin is out now and available to purchase here.