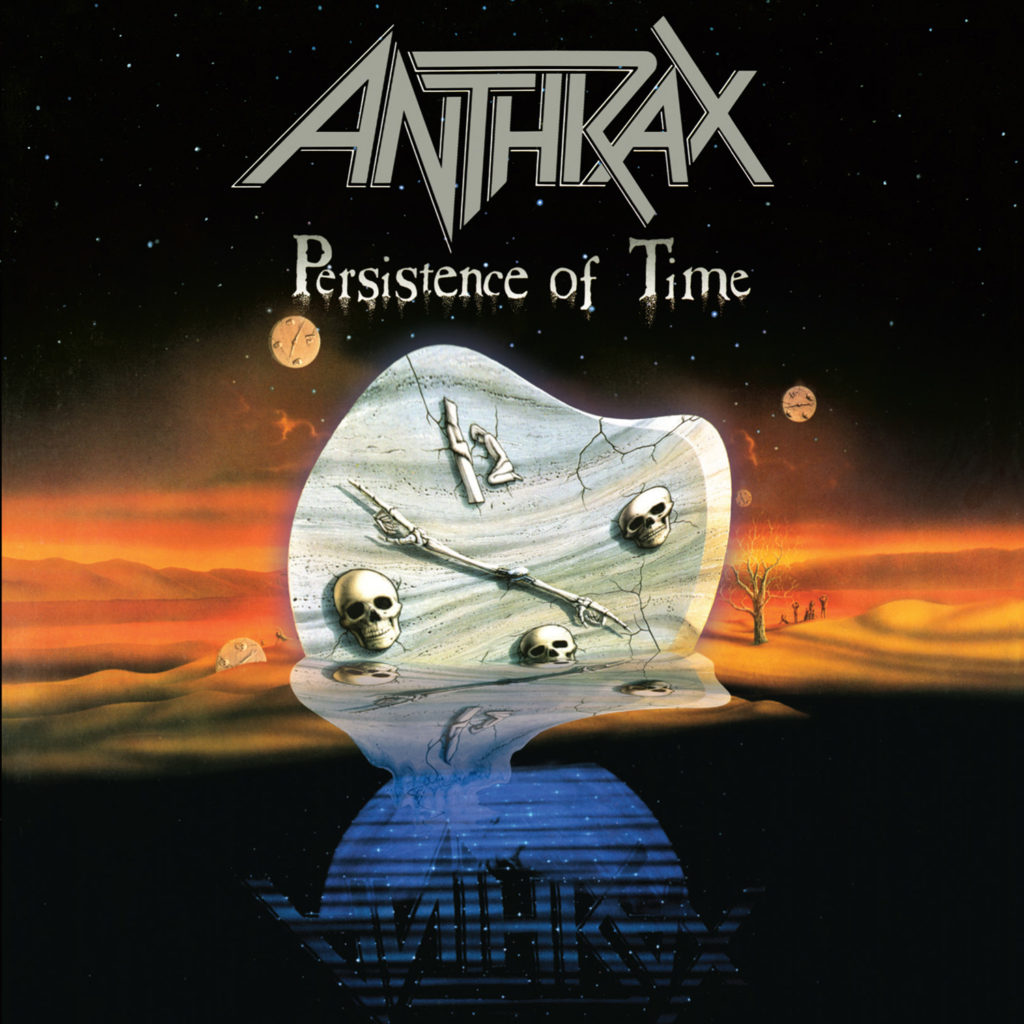 They comprised the mightiest force on the late ‘80s thrash scene — “The Big Four.” While the fight for “Top Dog” status among this ferocious pack was fierce, East Coast kingpins, Anthrax, held their own against West Coast heavyweights; Metallica, Slayer and Megadeth. One of the key factors in why the NYC-based brigade was so revered by so many was they were unpretentious and “real” — a skull-crushing, rib-cracking, all-American “Everyman” metal band. Anthrax could hit ya in the ballsack one minute, then hug ya in the ballpark the next. Go Yankees!

The band’s “golden era” catalog is iconic among hardcore connoisseurs — Fistful of Metal (1984), Spreading the Disease (1985), Among the Living (1987) and State of Euphoria (1988) — all bona fide classics. However, a strong argument can be made that it was the fifth Anthrax album that best represents their creative apex. And it was 30 years ago this month when Persistence of Time arrived in stores worldwide. To commemorate the milestone, Megaforce Records has just re-released the legendary album in deluxe, four-LP and three-CD/DVD combo editions.

Overseen by Anthrax and veteran metal producer Mark Dodson, Persistence of Time became an instant Top 30 smash when it dropped on August 21, 1990. And it ultimately would become the band’s third consecutive full-length slab to achieve “gold” status — energized by the raucous remake of the 1979 Joe Jackson staple, “Got the Time.” Pushed to the brink by Frank Bello’s clanky, yet throaty precision basslines, the lead-off single made for a wildly popular MTV video.

Fueled further by the signature-style Jackson-meets-Marshall dual guitar riffage of Dan Spitz and founder Scott Ian, Persistence of Time was every bit as heavy as the band’s previous LPs, while possessing a noticeably more progressive feel. Lyrically, the record embraced themes decidedly darker than the comic book-inspired compositions they’d become known for — a perspective projected through such tracks as “In My World” — They’re gonna put me in jail? Man, I’m already in jail. Don’t they know that my life is just one big cell?

Driven by the faster-than-light drum work of Charlie Benante and glossed by Joey Belladonna’s brand-enhancing lead vocals, Persistence of Time boasted a bounty of noteworthy highlights, including the high-octane video single, “Belly of the Beast,” the gut-chugging “Keep it in the Family,” and the super-frenzied “Discharge.”

An expansive and exhaustive effort, the newly-released deluxe anniversary edition is available as CD and LP sets. The CD package includes two standard discs along with a DVD, while the vinyl version offers four records, as well as revised cover art — brought to life by personal liner notes written by Scott Ian. Both sets feature the fully remastered 11-track album and a special bonus B-Side version of “I’m The Man,” as well as an array of outtakes, demos and rehearsal recordings. The 40-minute “guerrilla-style” DVD was shot in 1991 while Anthrax was on tour with Iron Maiden, and features backstage and dressing room footage with members of both bands.

In sum, the 30th-anniversary deluxe edition of Persistence of Time is a massive must-have — a “fistful of metal” that’s sure to delight the most dedicated Anthrax disciples.