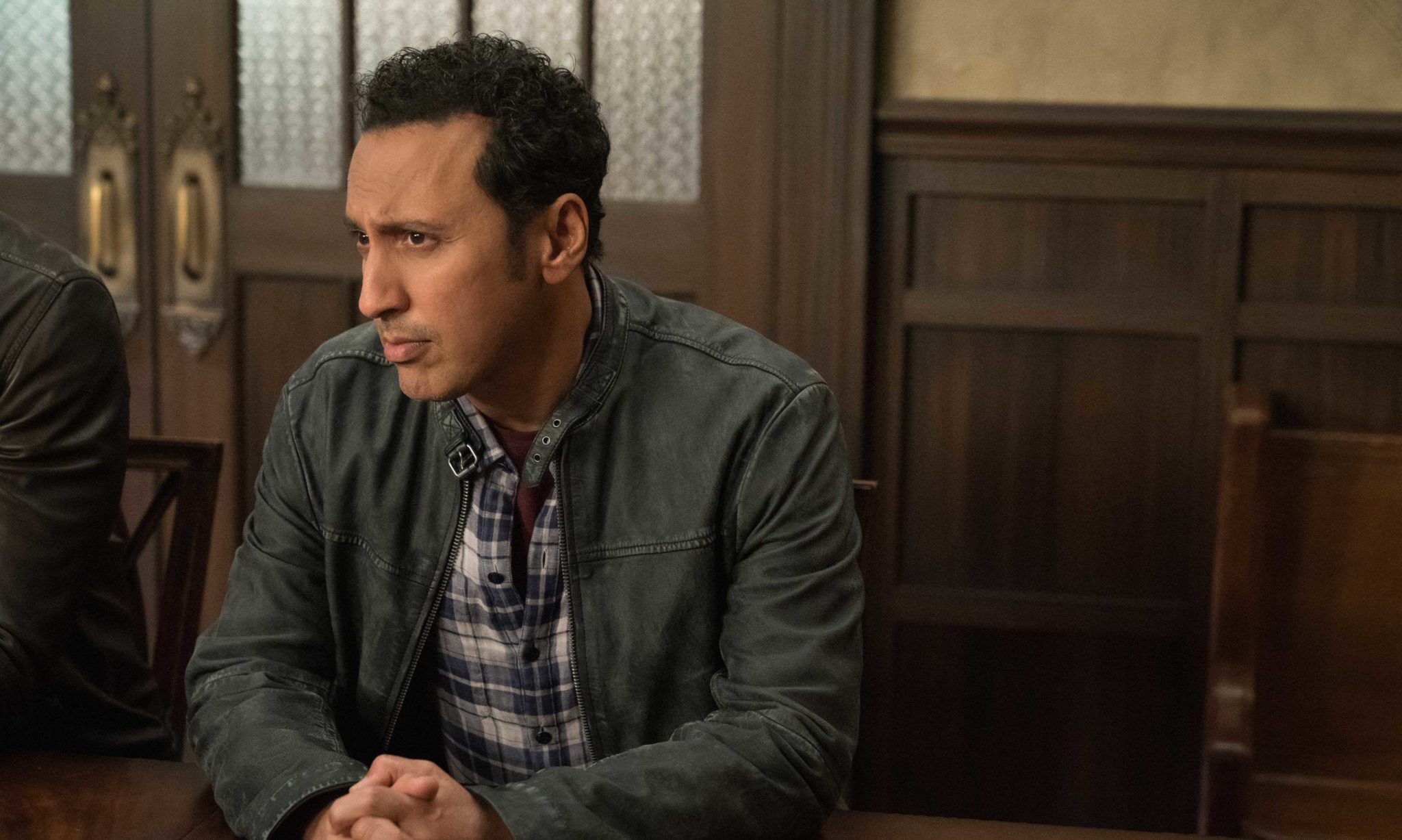 The debut season of psychological mystery drama, EVIL from Robert and Michelle King, was recently released on a three DVD package that includes some exclusive featurettes and deleted/extended scenes. Hailed as “one of TV’s wildest shows” (Vox) and proclaimed “really scary” (Paste), the supernatural drama EVIL: Season One was recently released from CBS Home Entertainment and Paramount Home Entertainment.

“Certified Fresh” on Rotten Tomatoes, EVIL: Season One is a psychological mystery that examines the origins of evil along the dividing line between science and religion. That’s the mysterious (and dangerous) line explored by skeptical psychologist Kristen Bouchard (Katja Herbers) when she teams up with priest-in-training David Acosta (Mike Colter), and contractor Ben Shakir to explore the evil humanity is capable of. Together, they dive into the Catholic Church’s files of occult phenomena to try and bring them to rational conclusions. Angel sightings, demonic possessions, prophecies, and conspiracies will test their faiths and push them to their limits as they learn that the world’s darkness may run deeper than they ever thought possible.

Aasif Mandvi (or Ben The Magnificent, as Kristen’s children call him) took some time to speak with us about season one of EVIL. That interview is transcribed here. The audio from the interview is also included via Soundcloud.

I have to say EVIL is the first network series I’ve watched in quite a while, and I was super impressed with it. Your character Ben gets some of the best scenes in the show; the stoic non-believer.

Aasif Mandvi: “Oh, thank you. Yeah, he’s a fun role to play because he is so different than me. He is so much more of an empiricist. And it’s kind of fun to step into that guy who believes only that. He’s a pure scientist, a purist. He only believes in those things that he can quantify and measure, and I like that about him. And he also likes to fix things, which is an amazing thing. Actually, I’m so not handy, and one of the funny things is whenever my wife asks me to fix something around the house, I will sometimes imagine ‘what would Ben do right now?’ I sort of inhabit him, and then I’m able to fix the toaster, you know?”

Ben would go and get his sister to figure it out for him. That’s what Ben would do.

“That’s true. He might, actually. Unfortunately, my real sister is not handy with a toaster either.”

I love how she’s the secret weapon. You go home and ask her something, and then she’s like, “well, try this.” And then you go back, and that’s what you do.

“Yeah. I think one of the things that I love and that we are going to explore in Season Two is a little bit more of Ben’s background. His family and where he comes from and stuff. I love the fact that the Kings cast me in the show because originally Ben was written as a white guy. So when they cast me, Robert King asked me to tell him a little bit about my family and their background. They decided to make him Indian and Muslim and give him this backstory and give him this family that was not a typical white family. So I love the fact that they kind of leaned into that with him.”

And the show is so much better for that, I don’t think it would have worked as well if they’ve gone their original way, so that’s great.

“Thank you. I appreciate that.”

Are you given any leeway at all to expand on what’s in the scripts? Can you ad-lib?

“We don’t ad-lib that much, but we do have constant conversations with the Kings about the scripts. Sometimes we will get a script, and they’re really great about just texting them and asking questions. So we’re constantly in conversation. Sometimes the writers are on set, and if something isn’t working, we can often be like, ‘well I don’t quite know. Can we try this or do this?’ So there is that. We are very much in collaboration with the writers and with the Kings about the scripts. With a show like this, it’s so tight; sometimes, it’s so specific that the ad-libbing would actually deter or take away from it in some cases. There are some scripts where the ad-libbing, especially in a comedy, you could improvise stuff and find gold. And with this, except for occasional moments where we have been trying to find some comedy, most of it is pretty tight.”

Can you describe how you came to this part Aasif, how the Kings brought it to you?

“I actually was in London doing a show for Hulu called This Way Up. See how I pitched my other show there? (laughs) And I got the script. You can often read scripts, and it’s just like, ok, this is a money-job or whatever. But when I read this, I thought, ‘this is really an interesting show. I haven’t seen a show like this. I haven’t seen a show that took on this topic.’ And it was from the Kings, who I love because of The Good Wife and The Good Fight. I’m a fan of their work, and so I was excited about it. Honestly, I was like, ‘I want to audition for this.’ So I did, and I got to meet the Kings, and when I came back to New York, we had a meeting, and they wanted to case me on the show. So I was just fortunate enough to get that job.”

How would you describe your character at the end of Season One? Still a stoic unbeliever, or do you think he’s slowly coming around?

“I think at the end of Season One Ben is still the unbeliever. But I know that in Season Two (because I have a little idea of what coming down the road) that’s going to start getting challenged a little bit. So I’m excited about that.”

I love that the girl that you hook up with, Vanessa, has a tic. And you wrestle with that; ‘Do I go through with this, or do I just walk away?’ That was great.

“Yeah, I think it was one of those things where, when I read that, and I was like (again not to give any spoilers away to people but the thing that she’s dealing with) ‘That’s not a real thing.’ And then I talked to the writers, and they were like, ‘Oh, that’s a real thing. We did research and found people who actually believe this.’ And that was mind-blowing to me. And I was like, ‘Wow. ok.’ So it made it almost easier to play, knowing that this is a real thing that happens in the world.”

And yet, Ben’s character would still him question it; ‘am I buying into this or not?’

“Well, that’s true. And I love the conversation they have about it. Because, in some ways, she also calls him out; on Ben’s ‘religion’ in science. And so in that way, he’s also got his ‘God’ as well, or his belief system.”

What are you usually provided with as an actor on this show, do you get a full storyline disclosure or are you showing up episode by episode and getting your scripts?

“We mostly show up episode by episode. But we know a couple of scripts in advance of where we’re going. But the Kings are also really great because they write according to what’s happening. In a show like this, it was the first season, so the three of us, me, Katja and Mike, especially, I think they wanted to see how the chemistry played. They were trying to figure out the show as well. So it was very much about seeing where the actors are taking it and then following that and then kind of exploiting that as much as possible. We knew a couple of scripts in advance, but we also knew that they were writing it based on what they were seeing.”

What is Michael Emerson like as a person? He always plays such an intense character; I’m just curious if he’s like that?

“He is. Michael is an intense kind of guy, but he’s a really sweet, adorable man. But it’s funny because he does have an intensity to him and a way of articulating things that he, I think, used with Leland Townsend, the character that he plays. He sort of took that aspect of himself and brought it up a notch. But he’s a lovely guy, and I’ve been a big fan of his work for so many years. I worked with him actually on Person Of Interest a couple of years ago, so it was great to get to work with him again. He’s like one of those actors in New York that you kind of go, ‘Oh yeah. He’s been around for so long, and he’s such a celebrated pedigree of actor,’ so it was great to work with him and get to work on this level with him.”

How safe do you feel that you, Mike and Katja are as characters on the show going to Season Two? Are you protected, or do you feel like anything could happen?

Character longevity? Do you think stuff could happen to you on the show because I kind of feel like the show could go anywhere at this point.

“Oh, yeah. I mean, gosh, I feel like what I like is that the three of us have created a nice team together, and I think that team works. So, obviously, all of us hope to continue working. But I think the show definitely wants to explore areas that are not necessarily just about ‘the exorcism of the week,’ or ‘the demon of the week,’ but more psychological stuff as well. And I think you see a little bit in Season One as well with social media and technology and how that sort of works. And, so, I think probably it’s going to go into different areas. There’s some kind of exciting stuff that I have a sense or a little bit of knowledge of is coming in Season Two for the three of us. So I like that.”