These knives are not only coming in hot, but they’re coming in heavy, today… Hotknives have just released their throat-straining new single, “Euphoria (Let Go),” that will be featured on their new EP, I, due out on Friday, July 24th.

Coming at you like a much-needed slap in the face, “Euphoria (Let Go)” really sets the tone for the new EP, a collection of Hotknives’ best, most impactful, most melodic songs yet. Within the shrieks of lead singer Zakk Abrams is a heavy dose of brutal honesty, you know, the stuff you know is true but you still don’t want to hear about it. It all comes within the neat package of a powerful post-hardcore act that would have fit in beautifully on any year of the Vans Warped Tour.

Speaking of honesty, “Euphoria (Let Go)” is about just that very thing, but in this case, being honest to yourself. “(It’s) a song about second-guessing yourself and the people around you, and coming to the realization that sometimes it is better to move on and cut your losses,” commented Abrams. “This song took us the longest to record in the studio and was the last song that we finished, but is the best representation of our new record, as well as the future of Hotknives.”

While some hardcore or punk bands may think it’s time to move on from that Warped Tour sound, seeing as the tour itself is now a thing of the past, but Hotknives are more than content with keeping that sound and spirit alive. They show no shame in playing music inspired by the sound of a time gone by, led by Abrams who originally started Hotknives as simply an online project meant for releasing his own, personal recordings.

It was then, in 2018, when Hotknives became a full-fledged band, recording and releasing three singles as the lead up to the release of I. If there’s one mantra that keeps this band going it’s that music should be meaningful and more than anything, fun. You’ll never find a shortage of energy or excitement with these guys since it’s in the very essence of who they are and what they do. If you’re at home, missing live music, and maybe even the Warped Tour then Hotknives are here to keep your spirits high. 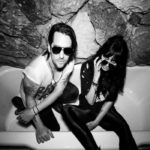