Get ready to feel what it’s like to experience Life in Low Fidelity with the release of Zachary Kibbee’s brand new album. It’s a hard-hitting collection of songs, but with a tender edge that illustrates a large step forward for Kibbee, as he has sought to bring in more modern elements to his bluesy repertoire.

A versatile musician, Kibbee’s capabilities extend far beyond simply rock n’ roll. He has also acted as a songwriter and producer for many up-and-coming artists and has excelled within the world of television and films, routinely licensing his songs to films, TV shows, and commercials. You may have heard some of his music appearing in advertisements from companies such as Victoria’s Secret, Volkswagen, Microsoft, and Uber Eats, as well as on massive shows like Daredevil, Ray Donovan, Lucifer, Shameless, and The Night Shift, for which he wrote the theme song.

To mark the release of Life In Low Fidelity, we caught up with Kibbee for a track-by-track rundown of the background and deeper meaning behind all of the album’s ten songs.

“This song is about living life in a haze. It’s really about letting ‘the party’ lifestyle cloud your vision and hinder you from moving forward and reaching your goals. It’s really easy to get distracted by fun times and the substances that go along with that.”

“This one is pretty straight-forward, I think. I wanted to write a song about being a badass. I am by no means a badass, but it was a fun song to write and it’s definitely one of my favourites on the album.”

“I wrote this song with my long-time producer Joseph Holiday and frequent songwriting partner Tom Rhodes. We wanted to write about what it takes to succeed. Mental fortitude, teamwork and persistence seemed to be the answer, especially since we were tackling this song as a team. It’s sorta about us, I’d say.”

4. “This Love Is For Everyone”

“I was visiting the Bay Area for a few days to write with Tom Rhodes when we wrote this song. Tom came to me in his living room with an idea that he had dreamt or heard in his head at some point that morning, a pulsing beat and the lyric ‘this love is for everyone.’ I loved the idea and we set out to write a song about how everyone deserves love, and that it’s all we really need to make the world better.”

“‘Come Back’ really isn’t about any one scenario or event in my life, but rather a collection of events dealing with people coming and ultimately going. I know I use the word ‘baby’ in the song, but it’s really not a love song at all. It’s as much about friendships as anything else, and how some friendships fade even when you don’t want them to.”

“This song is about a ride-or-die, not a perfect person, but a person that will always have your back and visa versa. It points out imperfections, but basically says that they don’t matter.”

“At this point in writing for this album, I didn’t really have a classic bluesy rock song yet. ‘Burn It Down’ was written because I really wanted to keep that gritty, rough rock sound in my music. And it ended up being one of my favorites on the album. I like the idea of just saying ‘screw it, let’s burn this thing down’ too, so it was fun to write.”

“Have you ever had a memory from a long time ago that you could still see and smell so vividly as if you were still there, and then revisited that place only to find that your memory has warped or altered it, like your brain has betrayed you? That’s what this song is about, memories slipping from your brain over time. It’s one of the more somber aspects of life and is definitely the somber point on this record. But I thought the song was so beautiful that I wanted it on the album.”

“This song, like ‘Don’t Fade Away’ was co-written and produced by Rich Jacques, a calming, talented, quiet genius. The first thing you might notice about this song is that there is no guitar in it at all! Strange for a rock guitar player, I know, but I really felt it didn’t need it. The title really represents what it’s about. And right now more than ever, it’s a scream for hope and for the future to be brighter. Don’t let the bad times conquer you, better days are gonna come.”

“I’ve always loved when albums wrapped up with a cool instrumental section, so naturally this song was a perfect closer to the record. As far as what it’s about, it’s a cynic’s view on relationships and betrayal. Unfortunately, this song is about a real person. Ironically, I had written it before the falling out, but I think my subconscious saw it coming, and I expressed my inner feelings like I’ve done so many times before, in my lyrics.” 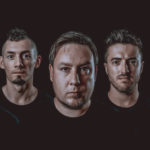