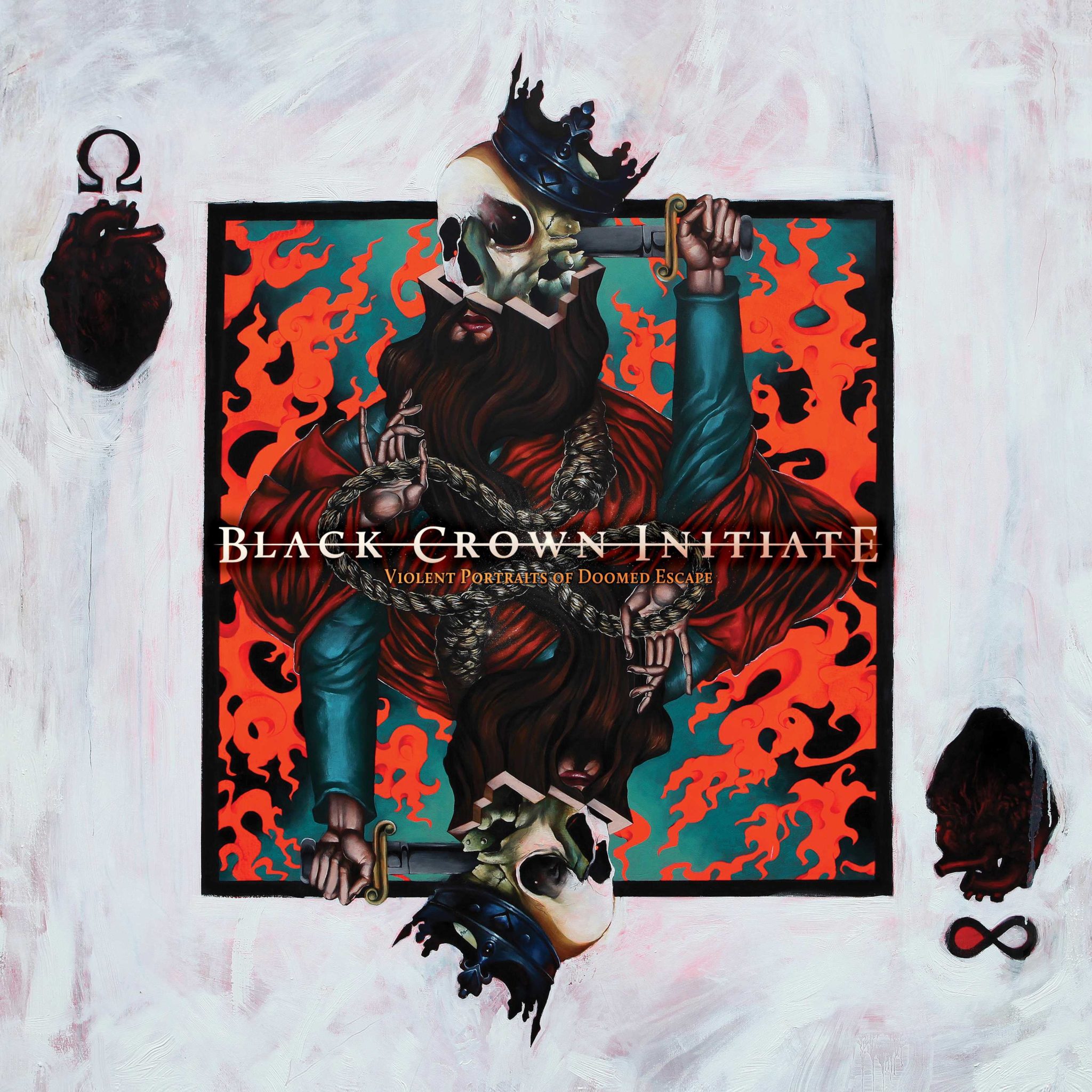 After what’s felt like a very long four-year wait since 2016’s acclaimed Selves We Cannot Forgive, Black Crown Initiate stand set to release their third album, Violent Portraits of Doomed Escape, on August 7th, marking their first for Century Media Records. The Reading, PA quartet are townmates with fellow progressive death metallers Rivers of Nihil – whilst bringing their own qualities and take on the style, there’s clearly something in the water that two top-tier bands of a relatively obscure genre come from the same place.

Opening track “Invitation” commences with guitarist and clean vocalist Andy Thomas singing “Fate sealed, he invites his cancer in.” It’s a powerful and intriguing beginning to the album, and very quickly demonstrates the range to Black Crown Initiate’s sound in going from 0-100 when James Dorton’s harsh vocals accompany the breakneck acceleration to the ‘death’ end of progressive death metal. The complementary relationship between the smooth and tuneful cleans from Thomas and the powerful growls of Dorton have been a hallmark of the band throughout their career and on Violent Portraits… it’s displayed to the peak of its potential. The harsh vocal delivery, in particular, is one of the standouts of the entire album, with each track almost feeling like a different character performance from Dorton, demonstrating his range from ominous depth with utmost diction on “Son of War,” the straight-up pissed off aggression in “Holy Silence” to utilizing throat singing techniques on the album’s midpoint in the appropriately titled “Bellow.”

The diversity of the band’s sound is at the fore throughout the album as well; at no point is quality sacrificed for the sake of experimentation, yet Black Crown Initiate are equally adept in the ethereal-feeling chorus of “Trauma Bonds” as they are in the technical and punishing harsher passages of “Years in Frigid Light,” and there’s broad appeal to those whose fandoms lay closer towards the progressive or metal ends in their taste. Focusing on the verse of the latter track, there’s another hallmark of Black Crown Initiate’s style on display – an irresistible cadence and groove; an intangible forward momentum that invites the listener to headbang along and leads them organically through the album’s journey. There are moments of reflection too, such as the solo at the end of “Holy Silence” or the contemplative closing track “He is the Path,” with the flow of energy throughout the record masterfully crafted for maximum impact in its frenzied peaks and calmer valleys.

The production, with duties handled by Carson Slovak and Grant McFarland, manages to strike the perfect and critical balance between clarity and depth, displaying the wide array of textures throughout Violent Portraits… to their fullest – guitar solos are shimmering, clean vocals have an organic presence sounding full without being overproduced, and the Nick Shaw’s bass adds heft where rhythm is the focus but is also brought to the fore in some of his more technical runs. It’s also worth highlighting the album’s artwork and aesthetic as also being perfectly complementary to the experience – the twist on playing card style from Schon Wanner’s cover art and carried on through the “Holy Silence” video (by Chris Bishop and David Brodsky) sets the listener up for the full deck of creative range and quality from the band.

Violent Portraits of Doomed Escape isn’t just an exceptional release for Black Crown Initiate, it’s a genuine album of the year contender and the finest the progressive death metal genre has seen since 2018’s Where Owls Know My Name (by the band they know so well in Rivers of Nihil). It’s a must-listen release for all fans of the subgenre, and a perfect starting place for those who sit anywhere in the spectrum of fandom around progressive metal or death metal. Here’s hoping that the future sees this outstanding album played live in full, and for this composition to get the recognition it deserves.