Bay Area band Covet is very proud to be releasing their new album, technicolor, today via Triple Crown Records. Their sophomore full-length effort expands their musical horizons with oodles of creative sounds coming from their guitar pedal mastery, heavy whammy bar usage, and dreamy vocals. The record’s ten tracks cover a wide sonic spectrum with as many textures as you could possibly imagine. technicolor is traditionally known as a technique that’s used to colourize old, black & white films. That’s essentially what Covet set out to do with the songs on this album, taking sounds and developing them to feature many different “colours” and, in turn, producing their most diverse work yet.

The brains behind all of this creativity is the three-headed monster of bassist David Adamiak, drummer Forrest Rice, and guitarist and singer Yvette Young. The trio has been remarkably productive in the five years since the release of their debut EP, Currents, which introduced fans to their vibrant sound. Their 2018 full-length debut, effloresce, reeled in more listeners and to date has racked up over ten million streams. Up until now, Covet has been known as an instrumental act, but that has changed with the release of their recent single “parachute,” the first Covet song to feature vocals.

With such a colourful young band, we linked up with Young to discuss technicolor’s lively album artwork, an image of a painting that she herself is responsible for creating.

Yvette Young: “I wanted the subject matter to be something uplifting and also tie it into the last album artwork for effloresce. The album name is technicolor, so I thought the image of a dark-colored flower blooming into a bunch of rainbow gouldian finches would be a really eye-catching image! And the flower ties it into the floral motif for effloresce.”

This isn’t the first time you’ve painted the artwork for Covet’s album. What comes first, the painting or the music? If you painted the cover art writing the music, how did the music influence the painting?

“For sure, the music comes first and then the visual part! I never quite know what I’m gonna write but as soon as I start, I usually start forming a narrative or story in my mind that I try to convey with the tones and melodies. After all that, I like to sit down and try to visually depict the tones/mood/colours and story that I had in mind when writing to music. For the technicolor album art, I had to think what the body of work sonically represented as a whole. We all felt like it was a whole spectrum of different moods… different colours. So that was what inspired the subject matter for the final art.” 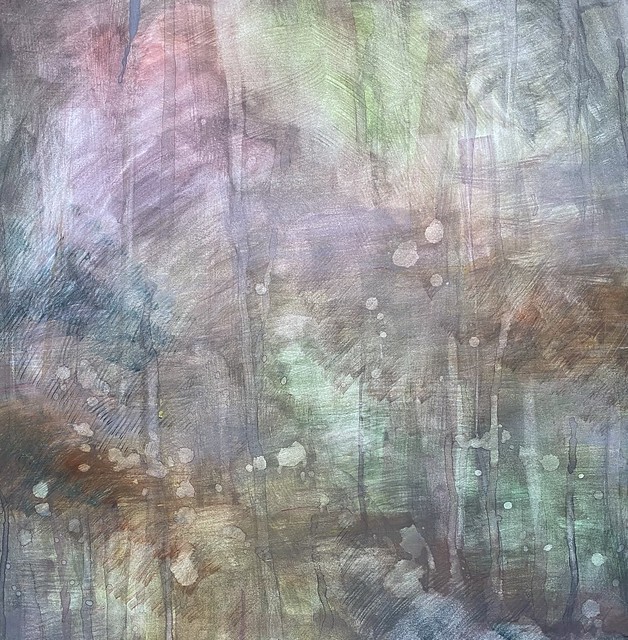 Please elaborate on the medium(s) used when creating the art. We’d love to know how you created the artwork.

“I created this album art while I was still in the process of tracking at the studio! I had to make do with what we had. I went to a local art supply store and picked up a board and some gouache paint (I prefer it to watercolour and it’s more manageable and compact than acrylic for me). We were all crashing in a little attic-like area in the studio with no light so I also had to buy a desk lamp to work in the darkness. It was a non-ideal situation because it was difficult to tell how accurate my colours were once the sun set, but I think I made it work!”

“I have at a thrift shop, but I think it was because it was a really adorable photo of a bird. I actually haven’t listened to the album yet because the record itself was in pretty poor condition! As you can tell, I am a big bird fan (laughs).”

“I feel like artwork is really important because it’s the first impression and statement you get to make before people hear a single word or note. It’s also a way to catch someone’s attention. It makes people curious and imagine what the music could sound like… I feel similarly about fashion! How you package yourself is the first impression you get to make on people without any conversation. People do make assumptions and it’s fun to try to either play to those assumptions or try to defy expectations in a deliberate way.”

“I think I want them to just be excited to hear what the album could be about. I feel optimistic when I see the art so I hope people can know that they’re in store for some uplifting times!”

“Shoutout to my friend Drew from Dredg (@drewroulette)! His work is so vivid and distinctively him. I feel so much respect for people who have found their signature style. Emma Ruth Rundle (@emmaruthrundle) also makes beautiful darker-toned paintings as well. Another one is Frances Quinlan of Hop Along (@francq__) who does wonderful playful coloured abstract and non-abstract paintings! She painted her own guitar as well which is rad! Charlie Brand of Miniature Tigers (@charliebrand) also makes the coolest fauvist-esque paintings and drawings, and he does his own album art as well. I am a big fan of his imaginative compositions. Music and visual art is very tied together for me so it’s cool to see people crushin’ both!”

“I am always going to love using my hands and getting dirty with paints and inks and will prefer that to digital art any day. But there’s a time and a place for everything! Both are totally valid and I think it’s all about what your intention is at the very end. I feel the same about analog vs. digital. It’s all valid and it just depends on what you’re trying to achieve with your work!”

“I hope it will accompany their listening experience and take them on a musical journey. I hope it will allow them to feel uplifted and inspired to imagine narratives of their own or even revisit old fond memories.”

“I think my favorite thing about it are the little bird faces! I tried to give their eyes a little distinct character with the highlight. It’s a dumb little detail but I had a lot of fun with it!”

“I don’t know if it’s my favourite but the album art for Defeater by DIIV really caught my eye lately. I loved the entire way they packaged it too. The whole thing looked like an abstract work of art and was very cohesive. I also really like the artwork for Don Caballero’s Don Caballero 2! The series of explosions are very eye-catching and memorable.”