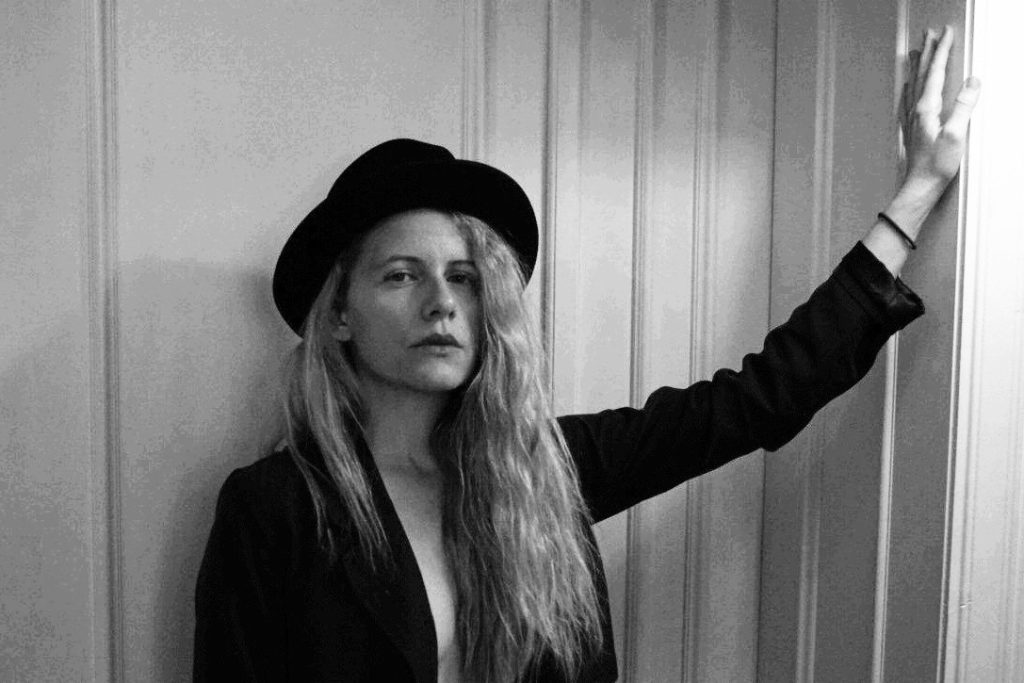 There’s a spooky tone and vibe to “Chemistry,” the recent single from The Ghost of Helags, which was inspired by the sounds of David Lynch and many dark, cold, winter nights travelling through Europe’s lonely roads. Produced to perfection, “Chemistry” is an ideal example of this duo’s unsettling and dark synth sound that’s sure to resonate with listeners of classic alternative and new wave music. It’s like a musical trip through the darkness that you’ll want to take again, again, and again.

Standing behind the beats, synths, and dark atmospherics is the artistically sophisticated duo of Teresa Woischiski and John Alexander Ericson. Woischiski provides the perfect vocals to blend in with Ericson’s superb production abilities. Originally from Sweden, the pair decided to pursue their music more seriously by moving to Berlin, Germany where they are now located. The Ghost of Helags’ unique sound is created by borrowing from the dream-pop sounds of their Scandinavian roots and combining it with the electronic touches of Berlin. Extremely artistic and captivating on stage, the duo relies on an innovative combination of dance and body language to connect with their ever-expanding audience.

In an effort to learn more about “Chemistry,” the duo’s musical roots, and what motivated them to make Berlin their home, we spoke with both Teresa Woischiski and John Alexander Ericson who filled us in on all we need to know about The Ghost Of Helags.

Your new single “Chemistry” is a well-produced slice of modern synth-pop that I think has a real ‘80s flavour to it. Before asking you more about the writing process behind the song, what was the production process like? Did it pose any significant challenges?

John Alexander Ericson: “We recorded the bulk of the song in a hotel room in Prague, including the vocals, and then took the recording back with us to Berlin, where we finished it in a proper studio. We wanted to only use old vintage synths on this one, so we swapped all the initial plugins and so forth, for the real deal. The biggest challenge was to keep the arrangement interesting all the way through the song, since it’s basically a four-bar loop all the way through, with small modifications throughout the song. But I think it worked out in the end and the song has a special dreamy vibe to it.”

“Chemistry” was in part inspired by the soundscapes evident in many of filmmaker and musician David Lynch’s works. How did Lynch come to be an influence in the writing of this track? Is he generally a large source of motivation to you as an artist?

Teresa Woischiski: “His music and atmosphere is capturing and haunting, something that resonates with us. He also combines this feeling of loneliness, weirdness, love, lust, desire, anxiety.”

The song certainly has a dark vibe to it which may have been motivated in part by the fact that it was written as you were travelling through Europe in the wee hours of many winter nights. Tell us more about how you were able to write “Chemistry” in the middle of the night and what the circumstances were like that helped in its creation.

Woischiski: “We drove to Vienna and somehow the hotel was super dodgy and not what we were expecting at all. The walls were crumbling, construction sites were put up and the hotel rooms looked like hospital rooms. So we didn’t even unpack but drove straight to Prague. It was night, foggy and almost a snowstorm on the trip, it was the beginning of January. The fog was so dense that we really had to drive slowly, so it felt like a never-ending road and trip. We didn’t talk much, were tired, disappointed but somehow also in a state of uncertain bliss, as the trip turned out unexpectedly adventurous.”

Do you remember what mood you were in that evening that “Chemistry” was written? Was there anything in particular that made you feel creative or put you in the mood to write new music?

Woischiski: “Cold, tired, longing, lonely, excited, exhausted, fascinated. That sums it up pretty well. All those feelings while driving on a long and lonely dark road through a foggy no man’s land between Vienna and Prague.”

After writing “Chemistry” in transit, you finally recorded it in Prague a few days later. Did the song change at all in any significant way between the late-night writing session and the studio process?

Ericson: “The vibe was the same, maybe Prague’s cold winter mood and the empty city had another influence on the recording process. We love recording in random places that capture the feeling of the song instead of perfecting it in a studio from the beginning. That comes later. The feeling has to be there first. The mood, the emotions, the isolation from reality. Nothing better for it than in an unknown place.”

Do you routinely write music at night or in the early morning or do songs materialize really at any time?

Woischiski: “Any time that is special, can be day or night. It just needs a special vibe to it, it does not have to be a pleasant one. Just one that breaks through the routine, the daily stuff. A feeling that wants to be felt more and be made into a song.”

With a dark, synth sound that I already mentioned sounds like it has a real 1980s influence to it, who are some of the most important artists that helped you develop the sound of Ghost of Helags?

You’re both from Sweden but now reside in Berlin, Germany. What made you decide to make Berlin the home of The Ghost of Helags? Were you attracted to the music scene?

Ericson: “We both went to Berlin for the music, the grit and the lively music scene. The dark winters are brutal but also quite good for being creative. Berlin is an ugly city when you look at it from an outer perspective. You have to find beauty in rare places. But it is there. Also the longing to be somewhere else when the cold hits can be quite creative.”

Do you have more new music on the way soon? Can we expect to hear more from The Ghost of Helags through the rest of this year?

Ericson: “We are releasing a new song in July 2020. It is called ‘PARALLEL.’ An album is on its way as well. Our debut album The Ghost of Helags.”