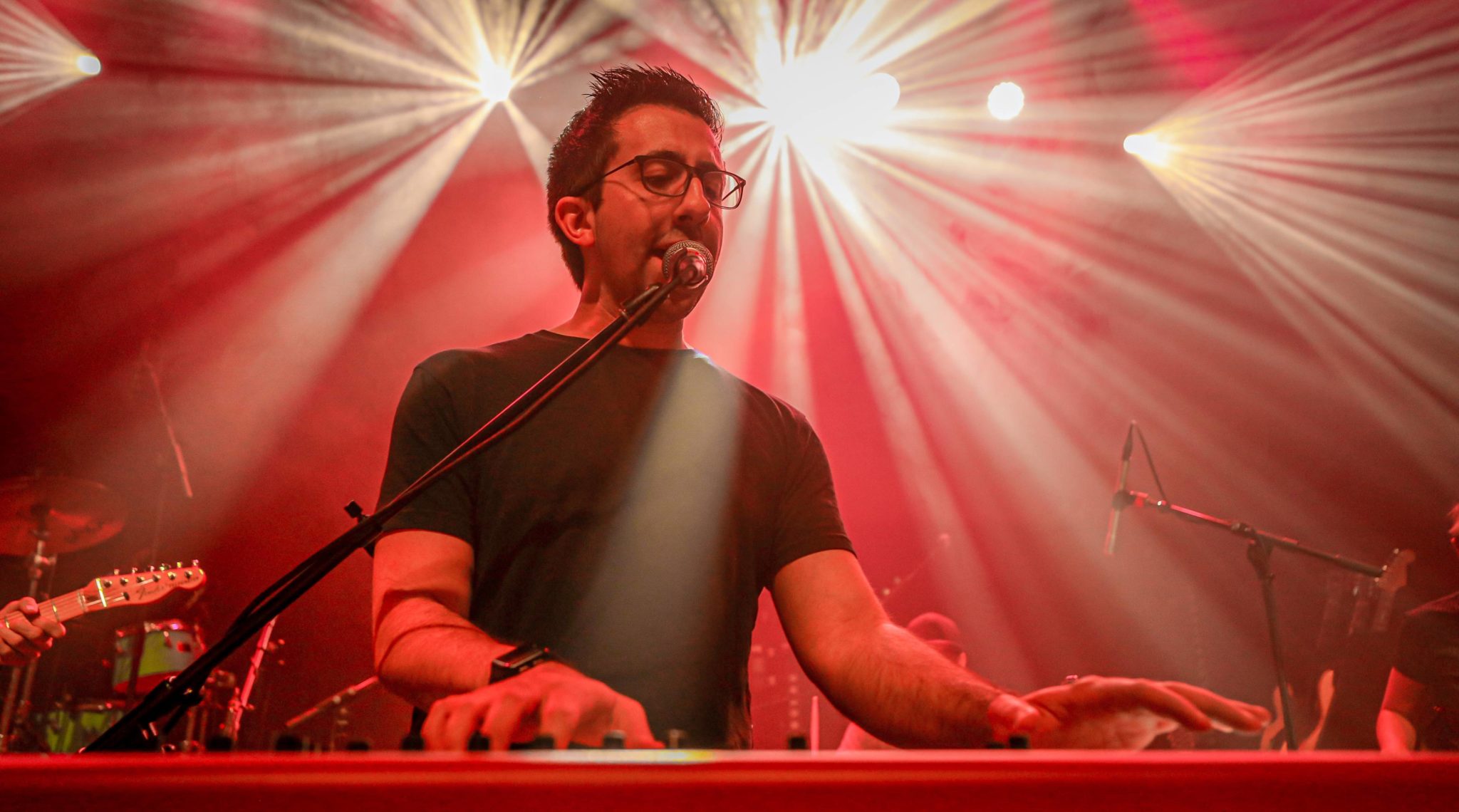 We’re reaching for our pen and paper to jot down a few notes about singer-songwriter Alec Ryan. This talented Nashville, Tennessee product is pleased to be releasing his brand new EP, Pen, a collection of four new infectious piano-pop songs that are about as friendly on the ears as the early morning sound of birds chirping. Pen is the follow-up, and somewhat of a continuation, to Ryan’s 2019 EP, Paper. What both albums have in common is Ryan’s infectious and upbeat musical optimism that can’t help but put you in a good mood. Ryan presents the songs as something of a soundtrack to your life, music best enjoyed while walking down a sunny street, or something to put on during a burgeoning romance. And, if you want a pick-me-up when you’re feeling down in the doldrums, Ryan’s got you covered there too.

“Warm Heart Cold Shoulder” is the lead single off of Pen, perhaps the most sincere-sounding song on the record. It’s a track that will instantly reel you in with its honesty and realism. Commenting on where his mind was when “penning” the song, Ryan said, “As a follow up to the Paper EP released last year, ‘Warm Heart, Cold Shoulder’ continues the exploration and pursuit of that which sets your soul on fire in life. I had just come out of a relationship when writing this song and was continuing to find that no matter how much interest I had in other pursuits in life that my first love, music, was still where my heart lied. I wrote this song with nothing but paper and pen at the piano, and in the studio, aimed to capture the song’s raw nature as we brought it to life. I hope ‘Warm Heart, Cold Shoulder’ means as much to you in your pursuit of what sets your own soul on fire as it does to me.”

As a songwriter, Ryan is most in his zone when he’s writing about life’s struggles; from the shackles of love to the neverending pursuit of meaning. He’s as much of a storyteller as a musician, with his tales brought to life over the soulful sounds of his piano playing. Both raw and fresh-sounding, Ryan’s music is the ideal alternative for those seeking a change from the over-produced adult pop music of today. Also known for his uplifting live performances, Ryan has played alongside acts such as Parachute, Universal’s Billy Raffoul, and Beyonce-collaborator Kevin Garrett.

To learn more about Ryan and his inspiring sound, we asked him a few questions about “Warm Heart Cold Shoulder,” Pen, and his optimistic tone.

I enjoy the kind of solemn, reflective tone of your new song “Warm Heart, Cold Shoulder.” Do you remember the mood you were in when you wrote this song or the place your mind was at?

Alec Ryan: “I was just coming out of a relationship that I had chosen to end. It was one of those situations where nothing was particularly wrong about the connection other than the fact that I had other interests that I couldn’t seem to override or take my brain off of. This seemed to become an ongoing battle in my life for a few years, I would come to realize, where I’d attempt to start a relationship or a new venture of other sorts, but not have my heart in a place to pursue it long term.

It became undeniable that the other love was music. The bridge of ‘Warm Heart, Cold Shoulder’ really lays all of that out most clearly: ‘I’m not sure it would’ve made a difference who I tried this with, cause there’s a love affair on my lips. Held captive but not against it.’ Over the course of a few relationships in recent years, it was becoming clear that it truly didn’t seem to matter who I started a relationship with, as my mind couldn’t really be taken off of that pursuit of music, which I came to see was my first love.”

Where did the lyrics come from for “Warm Heart, Cold Shoulder?” Did you write the music first or did you arrange the rhythmic structure around the lyrics?

“The lyrics kind of came from that ongoing battle it felt like I was facing for years where I definitely wanted to pursue things that I felt interest in or attraction to, like certain relationships, but ultimately found that it felt like my time was being spent on the wrong pursuits. It’s something that I’ve come to understand better since then, but it hadn’t really sunk in yet at that point, and so this was sort of my best efforts to grapple with it on the road to understanding it. In terms of the writing, I tend to write all parts of a song together, and this song, like most that I write, was written in one sitting.

With regards to the lyrics, I’m a bit long-winded, and so when I write, I don’t really plan out syllables and the likes ahead of time in like a poetic structure. I just know what I want to convey and find whatever words I need to say it. Often times it winds up being quite a few words that I’ve written, so it comes down to just trusting my ability to find rhythms that make the words flow in a way that I like. It’s definitely not an exact science, but I’ve learned that I usually like the result that way, so it’s a just a trust I continue to have in my own rhythmic sense.”

Your sound is arranged primarily around your skills at playing the piano which shows through a lot on your new EP. How were these songs on Pen written? Do you just sit at the piano and play around with sounds and melodies until you stumble upon something you like?

“Yeah, I’ve always just written with a notebook at the piano, not with computers and production involved, hence the titles of my first two EPs (Paper and Pen). That all stemmed from really starting to write a bit more prolifically in college. Piano was my main instrument of study, so I had access to grand pianos in the practice rooms every day, and often the time that I intended to be practicing classical pieces for school was spent writing pop music instead. Typically, I would play with piano ideas and lyric ideas I’d store in a notepad in my phone to get something started and write from there. At that point, I didn’t have a band playing with me or anything, so I would attempt to fill out this more powerful production vision in my head via the piano parts I’d put together.

It wasn’t until a few years later when I finally started working with Mike Trimble, who plays drums with me and produced these two EPs, that we worked a lot off that solo singer-songwriter nature of how I was playing these songs and built arrangements and production around that. So yeah, that piano-focused writing style and original composition of the songs is still pretty well kept intact on the EPs, which I love.”

Pen is the appropriately-titled follow up to your Paper EP that came out this past September. How are these EPs related? Is Pen some type of companion piece to Paper?

“Yes. This new EP Pen is meant to be a follow-up, a sort of a companion to Paper as you guessed. I had been writing and writing and writing on my own for years and, so, when Mike and I started working together, we started taking some of the songs we really loved from the bunch and recording in ways we felt authentically brought the songs to life. We actually recorded much of the two EPs sort of simultaneously, working on all eight songs in no particular order really. Then when it came time to start releasing these songs to the world, I found Paper and Pen to be appropriate titles for the EPs, as these songs came from an era of my life when the writing was all done by myself, alone in the practice rooms, or alone at the piano at home. Just me, the notebook, and the piano.”

In listening to Pen, I feel like there’s a lot of optimism in your music. Do you intentionally try to write more upbeat music or would you say you’re just naturally an upbeat kind of person?

“I’m naturally a pretty energized and optimistic person most of the time. A lot of my influences in music come from ‘90s and early 2000s pop rock and the likes, so despite not playing electric guitar like a lot of that era of music is based on, I often tried to capture a similar amount of energy via the piano. And, lyrically, I guess my writing is pretty reflective of how I approach life. I’m pretty optimistic as a whole, but of course, I’m an artistic-minded person and I do get pretty introspective and wind up getting in my head a lot, hence some of the deeper nature to the topics in the songs and my efforts to grapple with them. It’s interesting being fairly extroverted in social situations but also being someone who tends to overthink when left to myself. I like to think it all kind of balances itself out.”