With his skill set, Jesse Zuretti is someone who has learned to adeptly flex into different areas to enhance his abilities and create a diverse body of work in the process. Zuretti plays in the prog-metal band Binary Code who just released its ambitious new album, Memento Mori, that is as dark as it is symphonic. While Zuretti may draw inspiration from composers like Danny Elfman for his metal project, he also does composition work for Marvel Entertainment.

To date, Zuretti has won a Webby award, a Grammy award for web content, for his work for the webseries, Today in Marvel History that aired on Marvel’s official YouTube channel. Don’t be surprised if you see Zuretti scoring a major motion picture anytime soon. This being said, we connected with Zuretti to discuss the current state of the music industry, recording with Jeff Loomis, Arch Enemy, and much more.

(This interview is the first half of a longer chat with the Jesse Zuretti. The second half focuses on Zuretti’s compositional work with Marvel, and the Marvel Universe in general.)

Now that you’re exploring a totally different mood dynamic and, dare I be so bold to say, frontier for the band, what were some of the biggest challenges and rewards of recording the album when you’re essentially discovering uncharted territory as a group together, right?

So this was essentially like there was a complete blueprint set in place because with the technical level of musicianship required to play this kind of music, you can’t just jam in the studio, right?

“Right, yeah. Well, strangely enough, though we were very open to an evolution with the record, so when we got to the point of recording the final production with Aaron Smith and John Douglass, we were very open to changing things. To be completely honest with you, if I showed people the pre-production version of the record after they heard the final version of it, they would hear quite an evolution of the sound because we changed… I don’t think anything really stayed the same. We changed chord voicings, and we would invert chords and do all sorts of unique things and maybe drop certain things. A lot of stuff really changed with the help of our producers.”

“Yeah, he did Nevermore for quite a long time and then he joined Arch Enemy a couple years ago I believe and he also did a really cool group called Conquering Dystopia with Keith Merrow that was really cool as well. I wasn’t actually there when Jeff recorded (on Memento Mori), so the way that kind of came to fruition was Jeff is really good friends with Aaron Smith, our producer who lives out in Seattle. While Aaron was mixing our record and tinkering with it, which is something that Aaron does to great detail. He’ll work on something for hours and hours and hours, and really have only worked on 30 seconds of recorded audio after a full days work. He was doing that when Jeff was over and Jeff had a Strat (Fender Stratocaster) and was just kind of noodling around, just workouts and stuff.

I was like, ‘Wow, how cool would it be if Jeff laid down a solo?’ Then I got a video sent to me from Aaron of Jeff messing around, like improvising essentially, over the song ‘Those I Sought To Spare.’ What he improvised was better than anything I could ever do on guitar with months of practice.”

“Yeah, and then he finally laid down a more calculated and produced solo that he and Aaron worked really hard on. So it’s really cool, and he’s such a nice guy, just a really humble and amazingly nice guy, and it’s an honour. I mean I’ve been listening to Nevermore since I was a very young teenager. So yeah, it was huge. Are you a fan of Nevermore and Arch Enemy?”

I was just gonna say I’ve seen Nevermore open for Opeth when I was in high school once.

Yeah, Arch Enemy was on tour for Doomsday Machine and opened with, “Nemesis,” so it’s safe to say I was totally blown away. So in a weird kind of way, it’s funny to see Jeff comes full-circle. He has always really branched out as a musician over the years, so to see him continue to push himself to challenge to himself as a musician and as a collaborator, kind of like the way you were pushing yourself on this record, was really kind of an interesting bit of chemistry. I’m glad the timing really worked out.

“I know! You think of Jeff and you think of a very specific type of Jeff and I know that when you get to the level he’s at that you can do so much more than what you’re known for. It was no surprise that he did something as unique as he did for this, which I think is arguably one of his more unique solos because it’s kind of a dialed back version of Jeff. Funny little side note by the way about Nevermore, so Jeff is not actually my introduction to Nevermore in terms of people I know through the band. We actually toured with a band called Ghost Ship Octavius about four years ago at this point. Van Williams, the drummer from Nevermore, was in the band and Van’s a great dude.

Aaron actually recorded Ghost Ship Octavius and I met Van when I went to go meet Aaron when they recorded the drums in New Jersey. My friend Kevin Antreassian from Dillinger Escape Plan has a studio in New Jersey called Backroom Studios where we recorded drums with our producer Aaron. Aaron flew from Seattle to New Jersey, recorded Van, who lives in New York, did the Ghost Ship Octavius record. So I got to hear the record and I was there checking it out while it was getting produced and then we toured with Ghost Ship for a while and I think Van’s a great guy and we kept in touch to a certain degree. We’ve always reciprocated a love for one another’s work so this is actually the second Nevermore person who we’ve connected with over the years, which is really wild. I’m like you man, it was high school for me when I got into (Nevermore).”

“It’s crazy who you end up becoming friends with through your work. So when you said grade eleven by the way, are you from Canada?”

(laughs) Yeah, yeah, of course. I saw Arch Enemy in a little club in my hometown, it’s a cowboy bar now but they still host tons and tons of concerts there. It’s this weirdo night club on normal days of the week and weekends but it’s just funny you mentioned how nice the Nevermore guys are. Because a. They’re total beasts on stage, but b. I think that’s such a common misconception of heavy metal because, especially the musicians and the fans, where people think they’re these total wild maniacs. When it’s like, ‘No, that’s really just when I’m getting my primal therapy at concerts, but I’m actually a really nice person.”

“I think a little bit of that is self-inflicted because I think metal wanted to be perceived as very edgy in the early days of it.”

“I think that’s partially on the responsibility of the earlier founders of the genre, but what town are you in that they played through?”

Oh, it was in London, Ontario just outside of Toronto. I live in Windsor (Ontario) now, just outside of Detroit, but yeah we would catch a lot of concerts in London. Typically people going between Toronto and Detroit, and ever since they built a stadium there (in London), I think it was over a decade or two ago, yeah, it’ll be 20 years next year.

Yeah, we would catch all kinds of great touring acts through there. Like I saw Black Sabbath there, Soundgarden, Nine Inch Nails, all kinds of stuff, but yeah.

“Some of my favourite bands ever.”

Yeah, exactly, but yeah, a lot of really great, working-class, blue-collar heavy metal acts because there’s so many different clubs around there and it’s a perfect kind of town to blitz through if you’re trying to sell all your merch before you go back over the American border.

“Oh man, tell me about it. Seriously. I think that’s the hardest part of being a band is going over to a different country. Especially when it’s an invisible boundary basically. Those taxes on merch are brutal. We were very lucky. When we toured with Leprous in 2016 they had this huge trailer that was like the size of a bedroom basically, and they would take all of their merch and a lot of the gear through the borders. Just like one truck basically, and I don’t think they knew how taxes work for all of that stuff, so they got slammed for all of the merch for all of the bands.”

Oh yeah. Once when I saw the Melvins Big Band in Toronto with the two guys in Big Business playing with them.

Oh yeah, they were fantastic live, just snares so heavy you could hear the snap of it in your rib cage.

Totally! But everyone was pissed because they couldn’t buy any t-shirts or merch because The Melvins didn’t bring it over the border for that exact reason. They’re just like, “It’s way too much trouble, it’s way too expensive, and it takes forever to get through customs with all that stuff.”

“Yeah, there’s a high enough mark up on merch as is for a lot of bands, you know. It seems like it is when a band pays five dollars a shirt for a print, sometimes ten dollars a print. At the end of it, a venue takes merch commissions, and then you have to pay the retailer hooked you up with the shirt, like all those different things. There’s really not a lot of capital behind that, so it’s a little tricky, but I mean merch is a strange game for bands, I tell you. I don’t think a lot of people understand why they pay what they do at certain things. Like you went and saw Nine Inch Nails, and t-shirts must’ve been 45 dollars a shirt because that venue that they were playing in was probably charging them 35, 40 percent of a commission just for them selling merch at the venue. It’s a really weird business.”

Yeah, but you know what? I actually still have that shirt from the “With Teeth” tour so it was money well spent.

“Oh man, seriously, Trent Reznor is in my top five most inspirational musicians of all-time, for sure, like one hundred percent. I think of him constantly when I write music.” 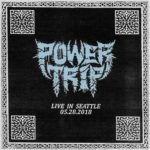