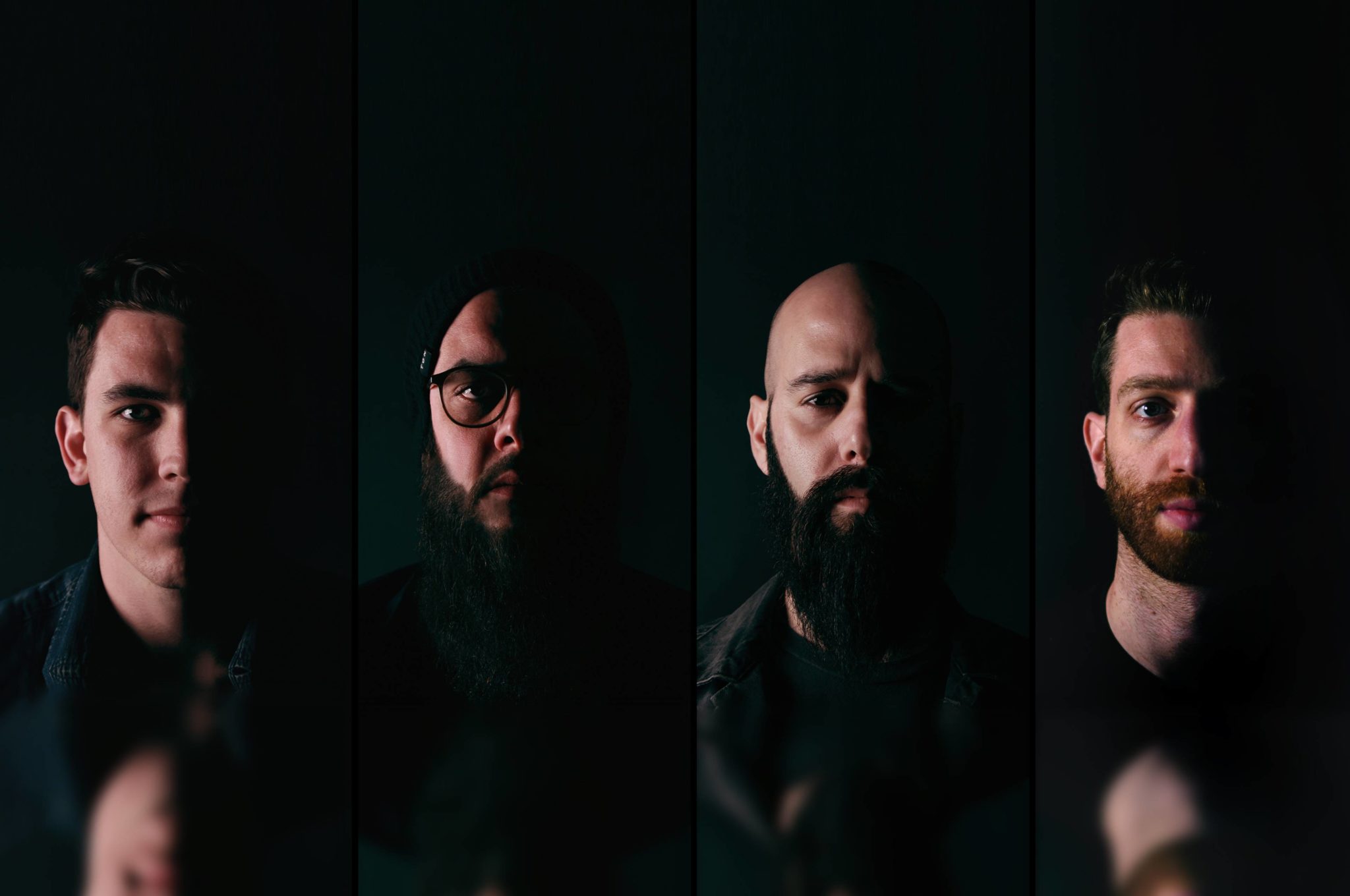 New Jersey prog-metal group Binary Code recently added another chapter to their annals of crushing, technical metal with their third album, Memento Mori, released on May 15. Inspired by guitarist Jesse Zuretti’s painful, first-hand experience with suicide, the new recording is an intensely personal, harrowing journey through the torment of his experiences, and the cathartic processes of writing Memento Mori. The resulting work is a testament to the transcendence of art, as Binary Code steps to new heights to combat pain, loss, and tragedy as one mammoth unit. And, fittingly, all proceeds from the record’s sales are being donated to various outlets for suicide prevention.

With such dark inspiration, it can be easy to overlook some other facets of Binary Code and their individual members. Their sharp musicality is oh-so evident in every tune, but they also harbour a serious love for comic books and the heroes and villains within. Considering Zuretti works by day as a composer for the Marvel Universe of films, it all seems very fitting. As such, we have the dudes from Binary Code joining us for this Top 10 – plus one – to explore the comic book characters who could have written the tracks of Memento Mori.

“Batman: As much as it may seem sacrilege to anyone who knows about my work, I LOVE DC Comics. I’ve never really subscribed to joining a team, per se – so I love all of the companies out there putting out great stuff. That said, “Away With Oneself” is hugely inspired by Danny Elfman’s work for the 1992 Batman Returns movie. I think the chorus really showcases that gothic influence you hear in Danny’s musical subconscious. I’ve also always found Bruce Wayne and his life to be so tragic, and he’s such a vengeful vigilante.” – Jesse Zuretti, guitar

“Ebony Maw (Avengers: Infinity War): Alright, so this one is more about the name, but, bear with me! Ebony Maw has some amazing mind powers: telekinesis, telepathy, mind control, and superior intellect. Lyrics for the song read ‘Come with me, To your end, The asphalt lines ahead form your path, Embrace the blinding void with awe.’ To me, something about Ebony Maw’s will to serve Thanos (“To your end,” “Embrace the blinding void with awe”), just resembles much of the dynamic between the two villains.” – Jesse Zuretti

“Legion/David Haller: Legion is one of the coolest Omega-level Mutant characters in the Marvel Universe. First off, he’s Professor X’s son. Secondly, he has some fascinating powers that make him quite the trickster, especially when he’s experiencing psychotic episodes (he has Multiple Personality Disorder). Reality shaping, matter manipulation, shape-shifting, time travel. In the AMAZING Noah Hawley-created TV series on Fox, David Haller has so many issues controlling his abilities, and has a huge game of cat and mouse with Sydney ‘Syd’ Barrett (a nice little homage to Pink Floyd there), his entangled love interest. Aside from the struggles with Syd, David also struggles with his other personalities, eventually determining that he is ‘The Omega.’

The lyrics to ‘Unborn’ read: ‘I am unborn and still conceived, I am the product of your fears, I am your ego in disguise, I am the path of your demise, I am the bittersweet relief, I am the hours of your grief, I am the one and only truth.’ ‘Unborn’ is very much about a game (even mentioned in the lyrics, ‘Can we play like we used to do, Our inane games,’) which I reckon falls perfectly in line with the story of Legion.” – Jesse Zuretti

“Dark Phoenix/Jean Grey: The lyrics alone read like a song about the early days of Jean Grey’s life with her mutant powers. Jean is also an Omega-level Mutant, meaning she is one of the most powerful of all of the X-Men. Aside from facing Death many times, she has a dark side to her that has the ability to destroy anyone and anything: Dark Phoenix. The lyrics for our song ‘Even Death May Die’ even make mention of ‘Like a Phoenix rising, I will find resolve in, Charred remnants of my waking life.’ To me, this very much describes the history of Jean and her battles with Dark Phoenix.

Jean’s powers combined with her conscience have put her at risk many times – she’s even been comatose over it. When Dark Phoenix emerged, she became quite the task for her friends (the X-Men), having killed the inhabitants of a planetary system after consuming its star. Jean Grey dies a few times during her history, feeling entirely suitable for the title ‘Even Death May Die’ (thanks, HP Lovecraft!).” – Jesse Zuretti

“Thanos: In Marvel comics, Thanos is a vicious warrior who murders people to court Mistress Death. He never realized how his violent outbursts and his disregard for any other beings has drowned him in a mindset that is shadowing any care he has for anyone else in the universe. This is very similar to the lyrics of ‘Let Them In Your World,’ which almost feels like someone trying to talk to Thanos and make him realize how his actions are only based on his direct emotions to court Mistress Death.

Ultimately for the Thanos we know in the comics, this would do very little. He is obsessed with the embodiment of Mistress Death and would never stop to achieve her approval. This song also reflects his heavy and strong nature as a fighter while showing his cunning skills of strategic advancements, which is reflected in the syncopated rhythmic guitars in the verse.” – Austin Blau, drums

“Bruce Banner/The Hulk: ‘Notion of Gravity’ is similar to the battle going on in Bruce Banner’s mind, as he wants to rid himself of the pain that The Hulk has caused him. Bruce is even known to try and get rid of himself and The Hulk altogether, but ends up failing to do so. This is similar to ‘Notion of Gravity,’ yet in the song, the narrator succeeds in their goal, but possibly not in their plan to rid themself of their grief and pain. The song also has a mixture of tragic lyrics and upbeat bright chords. This duality also replicates Bruce Banner and The Hulk in the duality between the smarter and weaker scientist and the primal and strong beast.” – Austin Blau

“Rogue: Rogue was part of the X-Men in Marvel Comics and has the ability to absorb the psyche and abilities of other human beings. This means that she has to watch who she touches, since it may mean the end of their life or hers. This makes it so she has to put up barriers and mental walls with people to not get too attached, which is similar to the lyrics of ‘Fade Into You.’ In ‘Fade Into You’ the narrator is in love with someone who has these mental walls up which she can’t seem to break and get past. This is obviously like Rogue before she gains the trust of The X-Men. The song also has this somewhat tragic feel to it, which reflects the same feelings Rogue had when she felt so isolated from the world and the other mutants.” – Austin Blau

“Dr. Manhattan: The song ‘Absolute Nothing’ is an homage to ‘Dust in the Wind’ by Kansas. It is a nihilistic perspective that speaks to the fact that in the grand scheme of things, we are not all that important. Dr. Manhattan shared these views. Even though he started out trying to help humanity, he eventually chose pragmatism and even nihilism as he turned his back on humanity and left to deal with greater things.” – Oded Weinstock, vocals

“Tony Stark/Iron Man in Endgame: The song starts with the idea of coming to terms with dying under uncertain circumstances. However, a conflicting realization quickly develops, that death may not be the way to unburden the lives of those who are left behind, and, in fact, by dying, the narrator is causing those he sought to spare even more pain than intended.” – Oded Weinstock

“Preacher/Jesse Custer: Preacher is about a character named Jesse Custer – a holy man who inherited his ethics from his father and ancestors. At one point, Jesse Custer gains the power of the Voice of God, which gives him full control of the world around him. In the beginning, Jesse Custer struggles to determine the right and wrong time to use this power – sometimes using it frivolously. Ultimately, the quest for finding God and finding the strength to use the Voice of God in appropriate ways has many ups and downs. ‘Filaments Dissolve’ is a song about wanting to hold onto power beyond reason – the Voice of God, so to speak, in Jesse Custer’s case.” – Oded Weinstock

“Amahl Farouk (although most villains can fit here): This song is about wanting to hold onto power and the need to regain it after it is lost. Amahal Farouk desperately holds on to David so he can use his powers for himself. Even after David takes back control over his own mind (as if he ever does), Farouk still does not let go, and eventually pays the price along with everyone else who tries to control David.” – Oded Weinstock