The weather’s finally getting nicer out. Can I offer you a Trace of Lime in that drink while you go lounge on the patio? With it starting to feel more like summer, Austin, Texas’ Trace of Lime have dropped their brand new tune “Creature of Habit,” a song fit for the changing of the seasons, with its fun, bouncy rhythm and positive-sounding vibes. This is the first single to come from Trace of Lime this summer, following up their two single releases last year not to mention 2018’s full-length release, The Unforgettable Tales of an Insignificant Life.

The indie-rock influenced “Creature of Habit” centers on a person who’s caught up in their ways and incapable of accepting the reality that things are rapidly changing around them. It’s a fact that touches us all at one time or another, either in our own reluctance to make a change or seeing someone else go through the same process.

Commenting on the way in which he views the song, lead singer Jordan Karam said, “The song reflects on my own struggle to accept an end and serves as a reminder that nothing can be done to stop it from coming. I find a lot of inspiration from progressive ideas and admire the people that push the boundaries of what is regular. I’m a big fan of an underdog and their come-up in the scene. The words slipped out somewhere between 2 am and 6 am and were written onto the wall of a hot shower.”

It’s a funny but true fact that Trace of Lime originally took their name off of a bag of chips. While their musical style has evolved slightly from indie rock to pop-punk through their near ten years together, one thing has remained true; they are dedicated to using exciting and dynamic instrumentation. The band members refuse to allow themselves get pulled into the modern indie rock closet where they are going to get lost among all the competition. This may have something to do with Trace of Lime’s frequent relocations, which has seen them start in the suburbs of Macomb, Michigan in 2011 to now calling Austin, Texas home for three years now.

To get our hit of Trace of Lime, we spoke with lead singer Jordan Karam a little more about the release of “Creature of Habit,” other new material, and their regular moves around the country.

The meaning behind your new single “Creature of Habit” is fairly self-explanatory but, if you will, please indulge us in how you came up with the lyrical ideas and thematic structure of the song.

Jordan Karam: “Human behaviour is such an interesting thing to me. How we cling to what we know, and fear what we don’t. The lyrics make change sound very rude if it had a behavior. I don’t think that’s really how change is, but it’s easy to think that way about the unknown. The arrangement of the song came first, the lyrics were sprinkled over top.”

“Creature of Habit” sounds like just about the perfect song to be released upon Memorial Day Weekend. It’s got a very summery sound, with sunny vibes all around. Tell us more about the situation in which you wrote the song and your mental state of mind. My guess is that you were feeling happy that day…

“Most ‘Trace of Lime’ lyrics were written in the middle of the night. I’m usually still lost in thought about something while the sun is coming up. I wrote some of the lyrics on the wall of a shower because a marker was the closest thing to me when the thought popped in. I struggle with the idea of change, but I love the idea of progress. This song is a reminder to myself that change is inevitable, for better or worse, and to enjoy the ride while you’re on it.”

How recently was “Creature of Habit” written? Did you all have to track your own parts and then send them around to each other’s houses to piece the song together that way?

“‘Creature of Habit’ has been an idea for quite a while actually. The song was written last summer and recorded in July in the same session as our previous two singles. The song’s main guitar riff and chord progression have been ideas without a home for years actually. We completed the music video right before the Corona shutdown and that is set to release on June 12th.”

Now, I understand you guys have been working on new material aside from “Creature of Habit.” Is this song going to serve as one of the singles on an upcoming record?

“We have plans for a new record but we aren’t going to be able to get into the studio until the quarantine is lifted. We’re using this time to work on new songs for the record and a new live set. If you listen to our last three singles compared to the rest of our music, the new stuff is a lot more aggressive. We’re trying to focus on making things more direct. ‘Creature of Habit,’ along with ‘Business’ and ‘Of Gods and Goddesses,’ represents what we’re going for with the new record.”

You originally come from Michigan, but Trace of Lime has relocated a few times, most recently to Austin, Texas. Why did you select Austin and what’s the band’s thinking behind your frequent relocations?

“Japan was an option, but it got outvoted by the group. We all grew up in the suburbs of Detroit and had been living in a band house in Kalamazoo, Michigan for the past three years. We were looking for a new adventure. Austin was attractive to us because of the live music scene. So we packed a van and drove across the country. There really is nothing like Austin’s live music scene. There are so many great acts here and always something to see to inspire you to be a better musician. That was three years ago and we have stayed in Austin since.” 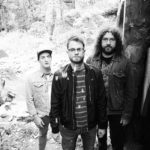 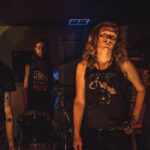