Typically, “Do Not Engage” is good advice if you want to live a safe and secure life. Well, you can temporarily chuck mommy and daddy’s advice right out the window ‘cause you should definitely engage with Nick Rifken and his brand new single. For a song that is his debut rock tune, “Do Not Engage” is emotional, relatable, and an impressive piece of work.

The writing of the song, off his debut EP, Arrival, was inspired by an intense argument during a difficult period Rifken was having with a close and long-term friend. At the time, Rifken felt angry and unsure of how to make sense of what was happening, so he did what he does best; got out a pen and paper, strapped on a guitar and wrote a song. “Do Not Engage” was written as something of a reminder to himself that, at times, it’s better to view the bigger picture in order to appreciate why one is important to you.

To shed some more light on the song, Rifken comments, “‘Do Not Engage’ was the first song I ever wrote on guitar. I feel it’s appropriate to kick off my first EP as it captures an intense and emotional moment of my life while pulling on all of my experiences as a musician. I was angry and frustrated and couldn’t yell at the person I was mad at because I knew it would only make the situation worse so I chose to say it through music. It’s cliché but true, it’s not always worth being ‘right’ sometimes it’s better to just forgive or let go and see the bigger picture with a relationship that really matters in your life. I hope that people find some resonance or relevance when they hear this song.”

Rifken expands further, noting, “I spent over a year workshopping ‘Do Note Engage’ on acoustic guitar through various open-mic nights and songwriter sessions of my local scene in Jersey City (Wine & Song) and Hoboken (The Latest Noise). After a year of growth and exploration, creating the final version with the help of my producer Gregg Sgar and talents of bassist Mike Sarkissian has been a transformative experience. I hope that people enjoy it as much as I did recording it!”

Although Arrival is his first EP, Rifken has been a mainstay of the music scene for some time, playing drums for Latina, pop and hip-hop artists and as a session drummer for various artists. He began playing piano and the drums when he was just a child, and his passion for percussive instruments grew from there, to the point that he studied music at the University of Michigan.

The sound of the EP is a combination of the alternative rock influences of his youth and an attraction to pop aesthetics and groove. Never disinterested in learning something new or his own personal development, Rifken travelled to South America at the beginning of the year with the intention to learn more about the Spanish and Portuguese languages and to deepen his understanding of the diverse musical culture and history. Currently situated in Medellin, Colombia, you can be damn certain that Rifken is working towards becoming both a better artist and a better human being. 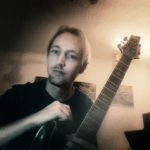 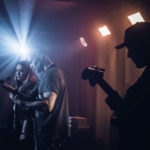