Hello, From Earth! Can anybody hear me?! You may be feeling this exact same way these days, as if you’re silently screaming and nobody can actually hear you because no one is actually around! Well, if you’re getting a little burnt out on your morning routine, then let us introduce you to Mourning Routine and the exciting new EP Hello, From Earth. Despite all of the external drama, Mourning Routine couldn’t be more excited to be issuing their debut, a five-song introduction about that difficult period in life caught in between adolescence and adulthood, when one is finishing high school and transitioning to college with all that burdensome anxiety attached to it.

Guitarist and singer Lucas Kamal uses his lyrics to express his insecurities that he can’t otherwise communicate in everyday life. Kamal is thrilled with the finished product of Hello, From Earth, but that’s not to say he didn’t have his doubts along the way. “Writing Hello, From Earth managed to simultaneously be probably the most stressful, but also the most rewarding thing I’ve ever done,” said Kamal. “Having to tap deeply into my emotions and what I was feeling was not an easy process for me. Too often the writing process left me exhausted and discouraged, worrying that I was in way over my head. It’s kind of funny, I wrote these songs over a year ago now. I feel like they don’t really represent me as a person or an artist anymore. What they do instead, is serve as a reminder of when I was at my lowest point in life, voluntarily self-isolating myself and wondering why I was constantly so sad. I felt like I was just wandering through life, watching everything happen from a distance. This feeling of being so detached from everything is the idea that holds Hello, From Earth together. It’s like being down on the ground while everyone else is living their lives in space.”

Kamal continues, “This EP has been in the works for what seems like an eternity, and even though I have to constantly battle with the very real fear that it might fall on deaf ears, I’m so beyond excited to finally put it out into the world. Even though these songs may not show who I am today, I hope that Hello, From Earth can be a tiny little stepping stone into the music career I hope to pursue, and a reminder of the person I once was.”

Mourning Routine serves as the solo project of Lucas Kamal in which he writes, sings, and produces all of the songs while playing almost every instrument. His youth was spent in Orlando, Florida where he grew up exposed to the post-punk of his father’s time such as The Cure, The Clash, and The Talking Heads as well as post-punk revivalists of the early 2000s like The Arctic Monkeys, The Strokes, and Interpol. This artsy emotional punk motivated Kamal to write his own music, which started during Christmas break of his junior year of high school. Over the course of about a year and a half, Kamal worked on these songs, tapping into the anxiety and alienation he was feeling. It’s a moody collection of songs, anecdotes of a young man’s youth trying to find his way. With Hello, From Earth, Kamal has issued his introduction and is looking forward to growing more into the individual and the artist he is capable of being. 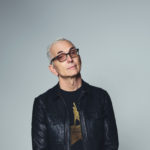