Manchester’s 26 year old singer-songwriter / musician, Joell Jordi, is set to release his new EP this month and, in anticipation of its release, we’re premiering his new single “The Electric Between Me and You”.

The track follows on from his recent single, “Living For Tonight” and “Shining Stars Tonight”, the video for the latter featuring different locations around Manchester. Joell had this to say about the song: “I have put out about it. This song is about the early stages of falling in love and the way you feel and the chorus is self explanatory stating “will you shock me one more time” as a reference to you just can’t believe how you got so lucky.”

Born and bred in Manchester, England, Jordi’s sound reflects the 90s Brit-pop era with modern-day indie songcraft. Joell began his career in music as a teenager fronting a couple of bands and touring the local circuit, gaining a burgeoning fanbase along the way. This evolved into the creation and composition of his own music, reflecting the sound he has developed today.

Speaking of the inspiration behind the EP, Joell explains, “I wrote the songs on this EP with a thought in mind of achieving more in life. Whatever demons or hardships you face you can always overcome and be a stronger person from it. I wanted to pay homage to the indie-rock heritage of the city I grew up in with a groovy lick and easily identifiable songs.”

Ahead of the release, we chatted a bit more to Joell about his background and growing up experiencing the iconic Manchester indie scene.

Thanks for your time Joell and for premiering your new track with us. For our readers who might not have heard of you before, could you tell us a short life story?

Joell Jordi: “So, I am Joell Jordi, an indie rock singer-songwriter from Manchester, England. I started off in a couple of bands when I was younger as a frontman and I really enjoyed myself. We did all the things bands do together, drink, smoke, and try to get everyone to listen to our music. Other members of the band then went off to Uni and things just drifted apart but I wasn’t finished. Music is what I wanted and still aspire to make a career out off and that’s when I taught my self to play guitar, found my own sound and started writing my own music. From then on I haven’t looked back.”

Being from Manchester, was it the Manchester indie scene that got you interested in writing/performing music?

“Without a shadow of a doubt. Growing up I listened to all things Manchester, from The Smiths, to Oasis to The Stone Roses there’s too many to mention. I loved the indie scene around Manchester, it is what really gripped me and aspired me to want to do music in the first place.”

Was there a particular band/album that you really connected with that started you on this journey? If so, what/who was it and why did you connect?

“For me, it was Arctic Monkeys’ Whatever People Say I Am That Is What I’m Not and favourite worst nightmare and also Oasis What’s The Story Morning Glory. I really started to connect with that British guitar sound and poppy lyrics which intertwined these two bands for me. I loved that these bands literally started off with nothing, believing in their music, and then it just taking off from there.”

A lot of the bands/venues which made the Manchester scene so iconic have long since moved on, what’s the scene like there now in terms of new acts and venues?

“I would say its alright, it’s not what it used to be but there are many bands that are up and coming in Manchester that are forming a new era of the Manchester music scene. The venues, on the other hand, have faded off dramatically over the years and it’s sad to see because it is so iconic even clubs and venues I went when I was 18 have gone so it says a lot about how quickly things can change but, yeah, there are still some really good iconic venues around.”

As a songwriter, what are your goals going forward?

“My goals are very simple – for everyone to connect with my songs in their own unique way, adapting it to whatever they want in their own lives. I have songs that are quite simple and the meaning is simple and I have songs that are complexed and can be compared to many things but, yeah, my goals are for people to connect with my songs.”

Finally, you have the new EP coming out, what can fans expect from it and from you in the year ahead?

“Yeah, so as we know this year has been a rocky one with the pandemic that is going on but, hopefully, I will end the year with some festivals I already had lined up and also some gigs. One festival, in particular, is YANA Festival in Manchester which is absolutely fantastic because it’s for Manchester mind a mental health charity so, yeah, it’s for a really good cause.” 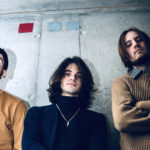