We’d like to introduce you to Blake English’s coming-of-age story which takes the form of his debut EP, Spiders Make Great Poets. The five-track album focuses on the pop-punk artist’s journey through breaking down societal expectations, dealing with social pressures, and his own self-expression. The lyrics are both haunting and intense yet simultaneously upbeat and instantly likable. His vocals are raw and dripping with angst and easily reel in listeners by offering them a well-illuminated glance into his personal journey. Like all great albums, Spiders Make Great Poets will leave you wanting more.

While growing up in Athens, Georgia, English was most drawn towards the more expressive musicians of our time, including David Bowie, Lady Gaga, and Marilyn Manson. At the same time, he discovered a great love for the cinematic horror universe, an influence difficult to miss if you watch some of his music videos. Ever the artist, English even directs his own videos and has also directed clips for other artists such as Leland and Miss Benny.

With Spiders Make Great Poets just the start of a great career to come, English has been so kind as to offer us a special track-by-track rundown of all five songs contained on the EP. Read on as English takes you deeper into his mind and methods.

“I wrote this song about the safe-space ten-year-old me created for myself in order to escape the pains of actual reality. Being the soon-to-realize gay kid with an affection for all things creative, I had many issues with the expectations put on me by my father and by my Christian school peers. I remember going to the basement one day and setting up old Halloween decorations and even wrapped Christmas tree lights around a dirty mattress. I had a fog machine and some CDs with some bad techno music on them I no doubt ripped off some P2P downloading program. I cranked the volume up full blast and danced around for hours. That was my getaway for quite some time and allowed me to be exactly who I wanted to be without any outside influence.”

“Ninth and tenth grade of high school were probably the hardest years for me as a kid. I had gone to a private Christian school since second grade with very few changes in classmates. I was very different from everyone and in those two years I went completely silent. I just stopped talking to people. I can remember having knots in my stomach every morning getting dropped off at the front of the school. This song goes into my struggles with suicidal thoughts during that time and how I dealt with the hypocrisy of my classmates and organized religious standards.”

“I love all my songs, but if I had to choose a favourite this one would be it. It’s satirical in nature, but is filled with a ton of empathy for a family who is thrust into ruin from just trying to fit in. I find middle-class suburbia very fascinating and had my fair share of it growing up in Georgia. I had these neighbours with a beautiful white house and perfectly kept yard and they were always concerned with everybody else’s business. So, when I wrote this song I imagined from their perspective what it would be like snooping on the family next door and finding out a multitude of secrets. Some of those secrets are founded in my own reality and some of them were a part of my friends’ realities growing up. I also tell the story mostly from the perspective of the mother as she is the only character that gets referenced from multiple view points.”

4. “A Ghost I Knew from Yesterday”

“Oh boy… you know one of the hardest parts about being an artist is you give away all your secrets, even the painful or embarrassing ones you’d otherwise keep to yourself. I say that because I’m still reconciling with the fact that I put this song on my first EP. Band-Aid rip here we go. I wrote this song about the painful separation I felt from my relatives when I found out they voted for and put Donald Trump in office. It was something that I felt directly conflicted with my core, which they were responsible for moulding and creating through my early years of development as a person and as an artist. I’m just thankful now that our love for each other allowed us to move beyond it and create and a new founded relationship amongst the rubble of what once was.”

“I wrote this song laying on a couch in my soon-to-be ex’s living room after having taken an edible. We were going through a really rocky stage and I couldn’t accept that he didn’t want to be with me. At a certain point in the night I remember him saying, ‘I just don’t want to hurt you’ and I laid back and thought ‘what the hell am I doing here?’ Unfortunately, I couldn’t escape because I was high as a kite so I just laid there and wrote a song about my struggles with depression and anxiety and the toxic coping mechanisms I’ve used to quiet this seemingly never-ending loop of torment.” 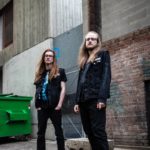