British singer-songwriter Arms & Hearts, the alter-ego of Steve Millar, has a slew of EPs under his belt, each showcasing his stripped-back sound and soul-bearing lyrics. No stranger to the scene, Millar comes with a seven-year career, and experience touring both wide across the UK, and further afield. On his latest release, Polarity, the artist shares a brief two-track burst of his way of wrapping his head around (and dealing with) the beginning of lockdown, told with a degree of experimentation. Rather than The Gaslight Anthem-esque energetic rock n roll sound, there is a wall of ambient guitars and rich backdrops for Millar’s vocals.

With previous releases, beyond the energy shown in the music, the key standout for the listener is the sincerity and emotion in Millar’s lyrics – with the heart on his sleeve style befitting his groundings in a punk rock approach to performing. On Polarity, the energy is more relaxed and ethereal, however, there’s the same feeling of truthfulness and pain communicated in the vocals and lyrics.

In the title track, there’s a combination of a ruthless bearing of his own feelings with a critique of the system which has lead us to this point in the UK – with lyrics referencing a life on hold and not much to come back to, it’s a poignant observation on self and society. “Time Flies When It’s Meaningless” echoes the feelings that many are experiencing in lockdown, isolation, quarantine, or whatever one calls it, with huge delayed guitars in the chorus driving the track forwards.

As a self-admitted stream of consciousness of the artist’s view of the situation in which we all find ourselves, Polarity is a mournful look inside the head and soul of one of the country’s most notable up-and-coming musicians and is well worth a spin for fans of his prior work, not to mention fans of more ambient post-rock. 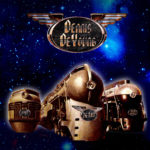