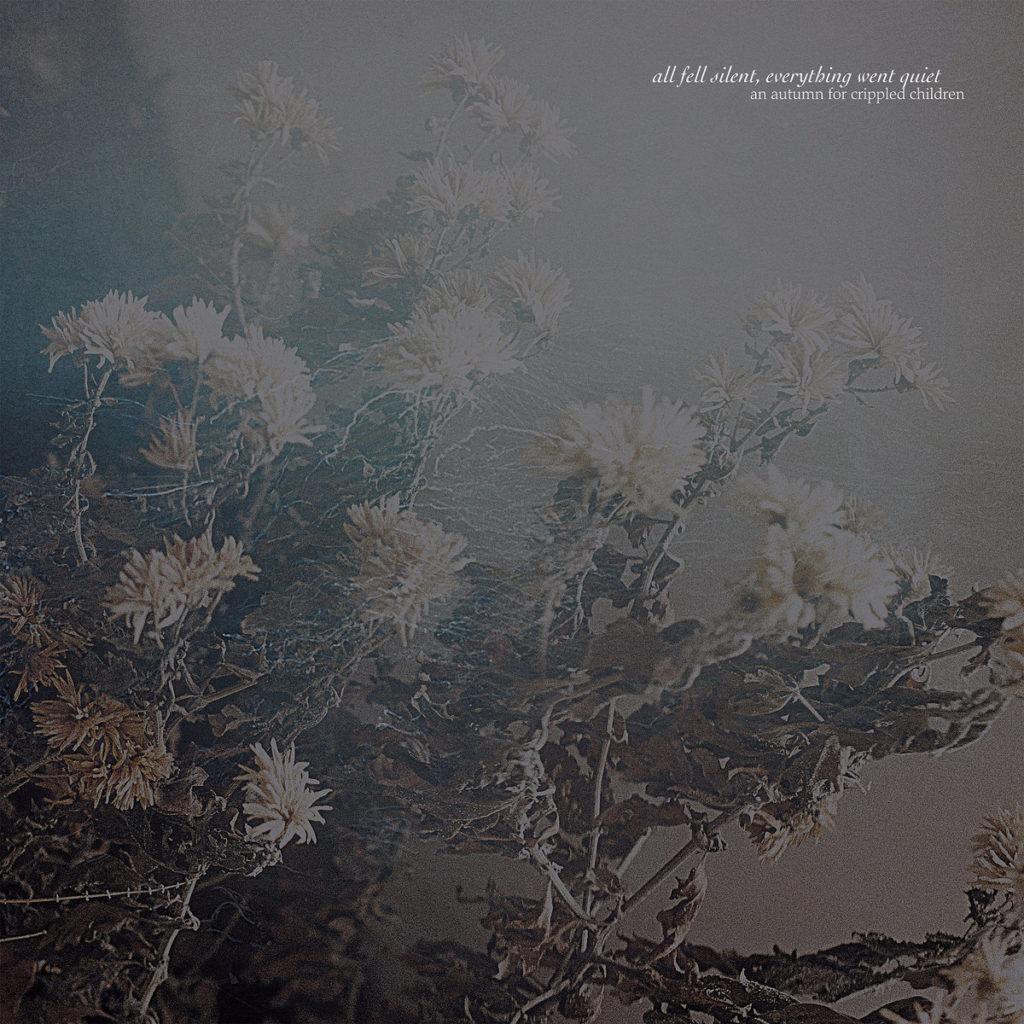 An Autumn for Crippled Children – ‘All fell silent, everything went quiet’ [Album Review]

When it comes to elusiveness, few are more so than An Autumn for Crippled Children. The pseudonym-comprising outfit started circulating around the underground scene in 2011 with their debut release, Everything, and again with 2013’s Try Not to Destroy Everything You Love, and saw their cathartic explosion of melancholy and despair sending shockwaves through the ranks. So elusive are they that in the near-decade they’ve been creating content, they are yet to take their sound to the stage. On May 1st, the triplet is set to release their latest record, All fell silent, everything went quiet via Prosthetic Records. The record was created, mixed, mastered, and engineered entirely by the band, right down to the album art, which makes it an interestingly insular record to sink into.

An Autumn for Crippled Children’s rather unique take on black metal meets shoegaze meets dream-pop opens with a dreamy synth and post-rock riffs in All fell silent, everything went quiet’s opening track “I Became You.” The song focuses on being young and pushing against your parents, despite eventually turning out exactly like them. It’s a powerful theme with an intense delivery, as Mchl’s piercing rasps penetrate through the simultaneously dreamy and distorted instrumentals, and project an immense wave of angst, contemplation, and reflection through vocal cords alone.

Within their own niche of the musical arena, the emotions presented through the rasps and instrumentals are so varied that they can be open to interpretation in several ways. Anger, sorrow, remorse, pain, reminiscence, and more are felt from one section alone dependent on which instrument is in focus. A strong example of this is in “None More Pale” due to the transcendental synths and ferocious drums making a cacophonic explosion of emotion in one direction; while guitars maintain a melodic edge and vocals a painful push, allowing a single track to take on multiple emotional forms.

Their rather magical ability to entice both dancing instrumentals and deep, sorrowful reflection through the same riffs is enigmatic to AAFCC. For example, “Everlasting”’s delicate piano keys from all three members behind dancing drumbeats from Chr create an active energy, while the guitars form a cathartic release of emotion. Similar notes can be said for “Silver,” with Mchl’s distorted wails being the emotive catalyst for catharsis here a la Amoseurs and Lifelover, which give the record a boost in immersion.

The underlying malevolence and aggression of previous releases, especially Try Not to Destroy Everything You Love, has been smoothed out around the edges and become more subtle in All fell silent…. By doing this, it does feel like there’s something missing from AAFCC’s sound and, as such, it doesn’t hit the same mark as their earlier material. The production, while appreciating the insular approach taken, is also somewhat limited in places, with the drums being the primary point of crisp listening. Whether this was intentional or otherwise is to be decided, but it causes the instrumentals to blend with the vocals in a way which impacts the immersion.

Each release from the outfit has certainly been eclectic, and All fell silent… is no exception to that notion. Their latest effort seems to dance around the delicate bops of The Cure and further away from their black metal territories explored in previous releases, to some exciting but mostly questionable effect. There is a definite concentration on atmosphere above all else, but it has a tendency to blend in between each track making few stand out as spectacularly as they could. In comparison to previous releases, mainly Try Not to Destroy Everything You Love, All fell silent… feels too similar and lacks the emotionally visceral impact that their jump into the underground spotlight first proposed.

Overall, All fell silent, everything went quiet is an enjoyable addition to An Autumn for Crippled Children’s elaborate, cryptic sound. Their ability to fluctuate and amplify cathartic emotions through the unconventional means of dream-like shoegaze a la Lantlos is commendable; however, All fell silent… lacks a certain punch as experienced in their previous releases. A bit more diversity and less blending throughout would have made the record more exciting, but it is nonetheless a solid addition to a curious discography with some very special moments woven between the tracks.