Hailing from the Swedish town of Örebro, Tribe Friday is an energetic, youthful quartet dispensing garage-rock revivalism splashed with a stylish layer of indie. Their newest release, the four-track Chasing Pictures EP, dropped March 27th, and it brings home all the best that these Scandinavian dudes have to offer. With two singles – “Freaky” and “If I Were You” – already hinting at the EP’s potential, the release is a sure-fire springboard to bigger things in the coming year.

Apropos of said opportunities, we have the Tribe Friday boys (Noah, Isak, Robin, and Anton) joining us for this Vinyl Variety segment to shine a light on their local record shop, Bananamoon. It’s a beacon of light amidst a darkening Swedish music scene, and it deserves all the attention it can get. Check out a few Tribe Friday tunes, and transport yourself to small-town Sweden with Noah and the tribe.

A Love Letter to Bananamoon:

Örebro (sorry about the very confusing Ö-letter – it’s pronounced kind of like the vowel sound in ‘heard’/‘word’) is a cute little town of about a hundred thousand people, located between Gothenburg and Stockholm, in the southern half of Sweden. If you hadn’t heard of the place before, it’s probably because it hasn’t got all that much going for it. A few good pubs, a university, a water tower shaped like a mushroom (I know, right?), and a few good indie bands (ourselves included, but do take the time to check out Roseph) is about as much as I can come up with. Your average small town, basically. Susceptibility to rumour-crazes and heavy drug use amongst residents. I for one love the place, but you know. It is what it is.

Me and Anton moved here (here being about 6 EU-miles outside of the actual city centre, in the middle of the f*cking woods) from further up north about 2 ½ years ago now, in an attempt to get closer to some form of music scene. For those of you who don’t know, the Swedish scene for live music is pretty much lying on its deathbed as a result of years of anti-culture politics and tendency towards uninterest (“Why would I want to see a band I’ve never listened to? Plus, I DO NOT dance unless there’s free booze for me to get drunk on so why bother?”) amongst the citizens of our lovely country. Now; if the live music scene is dying, it’s nothing compared to the situation for record shops. 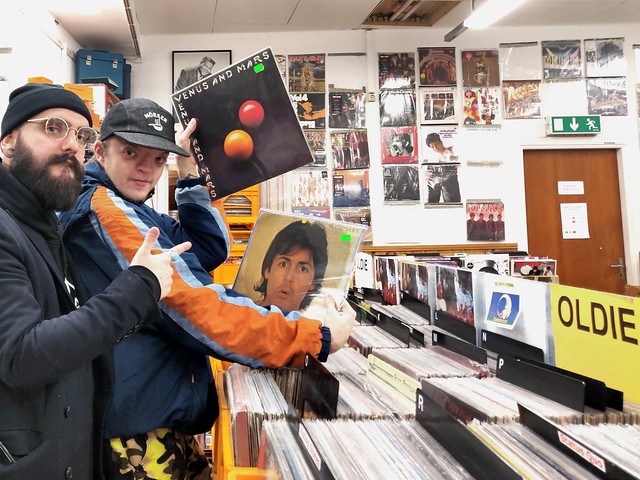 Streaming platforms might be attacking record sales all over the world – but keep in mind Spotify was invented here, and consequently adopted as the country’s standard for music consumption very early on. Also, social democracy might be practical when applied to education, healthcare, and social security, but it’s not always great for small businesses. Especially not for record shops in a town of a hundred thousand people, I can imagine.

Nevertheless, Bananamoon, Örebro’s best (and only, I believe) record store has been pushing on for about twenty years now. In the town centre, right next to Örebro Castle and the-corner-where-one-can-find-drugs (every town has one), it sits; a beacon of light for music lovers, hipsters, vinyl fanatics, old men who refuse to swear allegiance to the streaming empire, and people like myself, who romanticize about olden days when one could make more than half a cent per stream on Spotify.

Admittedly, I don’t buy records nearly often enough. But when I do – I buy them at Bananamoon. Most recently a copy of Sgt. Peppers Lonely Hearts Club Band, Tyler the Creator’s IGOR and MCR’s Black Parade (“It’s a classic!” I told store salesman Lars Göran, who didn’t seem to share my values). Every now and again, it’s nice to ease your existential dread by buying records instead of lunch. So thank you, Bananamoon, for providing an opportunity to do so, and for making Örebro a slightly better place. And for stocking our Trying Your Luck EP. I sincerely hope you make a fortune when it becomes a cult classic.