Decisions, decisions… We’re all faced with them, each and every day… What to do with your life, what toppings to get on your pizza… you know the deal. Well, we’re here to help you make a very easy decision, and that’s to check out the brand new single “Decision” from Satori vs. Dr. Echo. The song is drawn from the new Dub Defender Sessions album, due out on May 22nd via Anicca Records. “Decision” is a smooth operating track, with a nice light, almost calming vibe, along with some sweet and jazzy saxophone melodies which really round out the track nicely. It’s a solid introduction to the atmosphere of this new record and what to expect upon its release.

Saxophonist, singer and synth man Steven Jess Borth II offered some perspective to the lyrical inspiration behind “Decision,” stating, “‘Decision’ was written in a cabin in Lake Tahoe when I was contemplating about being too much of a pushover in given situations. It’s a reminder for me to not procrastinate or let others block my creative and work flow and keep me from doing what I am supposed to do.”

Borth is the man behind the creation of Satori in 2005 which acted as a side project of Rx Bandits and as an avenue for the talented artist to put on his display his own songwriting skills and affection for reggae. What resulted was the debut album Savor Every Moment and friendship he began to form with Dr. Echo, aka Justin DeHart who was asked to be a live sound engineer with the task of spicing up and helping to guide the growing dub influences of the project. DeHart and Borth hit it off creatively speaking with the CHLLNGR project following. In the midst of this transition, Borth and DeHart also recorded several songs that sat on the shelf for some time, until they were dusted off, juiced up and now compose the Dub Defender Sessions.

With this old album of hidden gems now nearly ready for release we are asking you, are you ready to be a dub defender? We know we are. 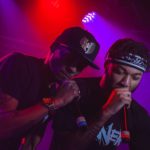