Mmmm…. “Nectarine…” So sweet! So tasty! And most of all, so full of self-worth! Yes, we have some “Nectarine” for you today, from the hearts and minds of indie rock band The Dragon Berries (are those sweet too?). The song comes from their upcoming studio album, And the Moon Turned Red, due out in July. Make no mistake about it, the motivation behind “Nectarine” is placed squarely upon the group’s motive to inspire. This is no downer of a song; it’s meant to be uplifting despite the serious tone of the lyrics. You can hear the enriching spirit of the song in the funky sounding verses and the overall anthemic aspect of it despite some of the seriousness attached to the verses that deal with overcoming the obstacles of depression and anxiety.

Offering more insight into some of its lyrical elements, the band stated, “‘Nectarine’ is a song about the internal struggles we face within ourselves. Sometimes we can be our own worst enemies by having negative thoughts and emotions and it can be very difficult to ignore this constant chatter in our minds. The song details ways to overcome these challenges such as pursuing your passion, making choices for yourself without regret, and self-reflection. Rather than external forces such as society or other people bringing us down, it’s simply our own thoughts.”

Those are some wise words from this fun and still emerging act that was created as bands usually are, at school! Connor Poteat and Quinn Donoghue lived together while studying at Appalachian State University in Boone, North Carolina. Perhaps, in an attempt to avoid studying, the pair began writing music with the intention of forming a rock band. Poteat made the decision to leave Appalachian State and moved to one of the most active musical cities in the country, Austin, Texas where he met both Chris DePalatis and Reid Harmon in 2017. After letting them hear some rough recordings, they were in and got to know each other more as they awaited the arrival of Donoghue who graduated in 2018 and then promptly moved down to Austin.

With an interesting and somewhat unconventional song for these times, we felt that The Dragon Berries made for a band worth getting to better know, so we asked them a few questions about “Nectarine” and the upcoming album And the Moon Turned Red.

I like the dynamic of your new single “Nectarine.” It’s got some really interesting instrumentation and I like how the vocal changes throughout the various parts of the song. Do you think this is one of your most dynamic, creative tracks yet?

Quinn Donoghue: “We wouldn’t necessarily say this is our most creative track. We feel like we did a lot of dynamic, creative things within the song such as the increase of energy in the second verse compared to the very laid back vibe of the first verse. Intertwining a bass solo with a guitar solo was also a cool idea. But overall, this might be one of our most straightforward songs in the sense that it’s just over three minutes long and the structure is relatively simple.”

How did you write “Nectarine?” Was it more of a collaborative effort in the studio, or the efforts of one of you writing most of the track?

Donoghue: “The song started off with me playing the chords on guitar and then Connor wrote most of the lyrics. All of the other elements of the song were a collaborative effort between all of the members in the band. When we first started playing the song together the hook was different though and we always felt that it wasn’t quite right. It just didn’t flow as we transitioned in and out of the hook. Eventually, I changed the chords and the melody of the hook and the song flowed much better.”

Interestingly, the song is titled “Nectarine,” which is obviously a sweet-flavoured type of peach. Using my own interpretative skills, is the song title motivated by the need to find that “sweet spot” in life to overcome our own personal obstacles?

Donoghue: “It’s hard to say where this theme came from. A lot of times when we sit down to write, the words just flow out and rarely is it a super conscious effort to write about a particular topic. Obviously, as the song progresses the lyrics need to be cohesive so that it’s focused and we’re not writing about all of these different things in one song. The song is in a minor key so maybe that influenced more serious subject matter but it’s hard to say. The words are reflective of Connor’s experiences though. Not a singular experience, but he has a history of dealing with depression and we all feel very lucky that we’ve found our passion in music to help overcome these negative emotions.

As Connor alludes to in the song, feeling like we have a purpose is very important to having a life of fulfillment and peace of mind. We definitely like the ‘sweet spot’ theory in reference to the song title but it’s more abstract than that. The imagery and sensory detail that the word ‘Nectarine’ evokes just fit the vibe and the message of the song.”

Connor Poteat: “And The Moon Turned Red encompasses what the Dragon Berries are all about. Every song has a different flavour and we really do cover a lot of different sounds on this record. Once people listen to this project in totality, we hope they see that though we have a wide range of influences, we still have a singular voice and a singular sound that is uniquely ours.” 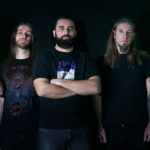 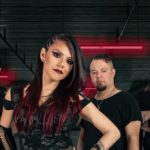