During these uncertain times, some things we can all do with is more creativity and positivity. As the COVID-19 pandemic causes worldwide disruption and stress on most industries, including the music industry, one of the positives we can take from this time is an exploration of the self, and creative encouragement. The latter is something which Tim Cabral, of the atmospheric doom/black metal outfit Marrowfields, has witnessed during this time. In a chat with him shortly after the release of Marrowfields’ debut record, Metamorphoses, on Black Lion Records (check out our album review), we talk about the record, future plans and ideas, alongside observing the current situation’s effect on the music industry and musicians.

First off, congratulations on releasing your debut! It’s excellent. What’s the overall reaction been to Metamorphoses thus far?

Tim Cabral: “Thank you for the kind words. So far, the reaction has been positive. We’ve been lucky enough to get a lot of good reviews on the album so far.”

That’s great to hear; it’s certainly deserved! Could you give a little history/background on yourself and the band – how you all came together, how you found your sound and so on?

“My guitarist, Brandon Green started the music project of Marrowfields in December 2015. He came to me with some song ideas that winter and we started putting the music together that winter and spring. It was started as just a fun studio demo. Just something fun to do after work. Brandon and I would create some guitar and bass riffs and then Brandon would program some drum tracks to go over it. We quickly realized though that the songs were very strong and needed to be played live, so we shared the music online with some local musicians and started building a band.

We first auditioned AJ Grimes on drums and he fit in perfectly. Added a lot of power and presence to the music. After jamming with him for a bit, we got Josh Moran on second guitar and Ken Gillis on vocals. Both were great additions to the band and helped bring our sound to a new level. After rehearsing the album for a year, we went into the studio to record the album. Besides the drums, everything was recorded, mixed, and mastered by our guitarist Brandon Green in his home studio.”

This record has been quite a child for you all then? They’re definitely powerful tracks; it makes sense it quickly gained traction! On the record, I found your blending of atmospheric doom and black metal really interesting. Who were some of your influences when creating Metamorphoses?

“It’s definitely like a child to us. This record has been the kind of record that I’ve been wanting to make for a while. Some of our influences include bands like Swallow the Sun, My Dying Bride, Yob, and Type O Negative. We wanted a good mix of traditional doom, black metal, and death metal.”

I can definitely pick up those influences. Always good to get something out you’ve wanted to for some time! A good dash of Pallbearer too? What was the writing and recording process like for the record? It’s a crisp and solid debut; must have taken a while to compose and perfect as you mentioned rehearsing it for a year?

“Yes, I love Pallbearer too. Great band. We took our time with this album. It was quite the learning experience. Especially for our guitarist Brandon who managed all the recording and mixing duties. There was a lot of trial and error to get the right organic tone for the record. We were also meticulous with the composition. We took our time composing the demo and then made some changes after rehearsing with the full band. As well as experimenting in the studio. Every idea was taken into consideration before the final product was achieved.”

What did you learn from the process? Also, I read the record is heavily inspired by Ovidian folklore; where did this come from and how did it make its way to be incorporated into your sound?

“I think the main thing we learned from the process is to not be afraid to take your time with the process. To really explore every aspect of the song to meet its full potential.  Again, my guitarist, Brandon Green, is the main songwriter in the band. The idea to bring Ovidian folklore into the album concept was his. Those epic tales of creation, gods, and tragedy really meld well into epic powerful music. That is something that we would like to continue further with future music. Whether we continue with the Ovid material or move to some other piece of literature is to be decided.”

Absolutely. The tales certainly blend well and adds to the grandiose nature of atmospheric doom for sure. Exciting to hear you’re continuing on that path! Taking your time with creating is essential; do you find this was made easier by ultimately creating the record before signing with Black Lion Records?

“Recording the album ourselves and having no time constraints definitely helped. It helped us have the freedom to do it our way.”

Congratulations on being picked up by Black Lion Records too! How did you find them and end up working with them?

“After the album was completed, we shopped it around to various labels. Black Lion offered us a fair deal and we saw the success that they have had with other bands on their label, so we felt confident going with them. Without them, I don’t think the album would be seeing as much activity as it is seeing now.”

Do you think that’s a practice more bands could follow to ease pressures and allow for more creative relaxation?

“Yes, I think if possible, all bands should try the do-it-yourself approach. Having that freedom of expression can only make your music richer.”

For sure. Also, with Brandon being both in the band and mixing/mastering the record, do you feel that’s a stronger connection towards the final product as opposed to an external engineer? I’ve always been curious about that.

“Yes, we are definitely lucky to have a band member take charge of recording, mixing, and mastering. I’ve been in bands before where we have gone to a producer to record the album. While having an outside ear can help with editing the material it also creates a lot of stress when it comes to finances and time management.”

It must be good to have the whole project in your own hands throughout! Changing the subject somewhat; it’s on everyone’s minds at the moment, the COVID-19 pandemic is affecting all forms of industry worldwide at the moment. How do you think it will affect the music industry with the continuing lockdown/self-isolation measures? And how have you guys been going through it?

“Well, we originally had our album release show scheduled for June but that was cancelled due to the virus lockdowns. We are hoping to reschedule for September. It’s a very weird and scary climate now and hopefully, things get better soon. I know a lot of professional musicians who have been hurt financially because they can’t perform. It will be interesting to see what measures will be put into place so concerts can still go on. At the moment, my band members and I are working on new music individually. We have enough material to write a whole raw album and maybe an EP. I think it’s safe to say that the virus lockdown has not stifled our creativity.”

It is definitely strange, but with some luck and following guidelines, we’ll be back to normal soon enough. It’s good you’re still creating and getting on with that side of things; would that be more Marrowfields material or other projects? Any hints on how that’s going?

“We are working on new material for Marrowfields. Our main focus creatively is that. We are trying to explore more musical ideas with the next album. Right now, I have some song ideas that lean towards a more Triptykon sound and then I have some more mellow acoustic guitar ideas that could go into one of our softer sections.”

There’s been a massive surge in people taking up creative outlets at this time which is really good to see, it gives hope for sure. What do you think people can do to support the music industry and artists at this time?

“If any music fans have the financial resources to support artists, I would suggest they buy merch. Album and merch sales are the main ways that artists are making money now since all concerts are cancelled due to the virus lockdown. We appreciate all the interest this album is getting at this difficult time and we love seeing all the newfound creativity that others are sharing.”

A Triptykon sound would absolutely be interesting. What other conceptual/lore influences would you like to draw from in future material?

“I would love to explore other folklore on our new material. Local Native American folklore could be a possibility. I also really enjoyed what Gorguts did with Tibetan Buddhist folklore on their Colored Sands album. The possibilities are endless and I’m excited to see what the next album brings.”

That’s quite exciting. Do you feel exploring folklore through music is a good way to educate on the past?

“I definitely agree with that. The more we can explore with music, whether it is religion, philosophy, science, or history the better it will be.”

That’s great; it adds another layer to the immersion and value. Is there anything else you’d like to say about the record’s messages/themes?

“With this record, we set out to create a powerful and dynamic piece of music that the listener can dive into and explore their own ideas about mortality, temptation, and creation. We hope that our fans will each find their own way of connecting to the music.”

I’m sure they will; it’s a very enveloping piece! I enjoyed setting into it and resonate with what you wanted to get across; thank you so much for taking the time to talk to me today.

“Thank you for the opportunity to talk with you about our debut album. I really appreciate it.” 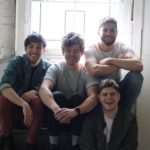 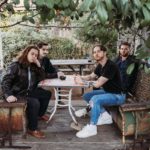