Move aside, Hunny! I have a new love in town and they’re called Loveblind. The self-described “international synthwave supergroup” has a special treat for us with the debut of their brand new music video for “White Piano, Black Dress,” a song off their latest full-length, Sleeping Visions, which dropped last week. Not only is this a special album due to its original and modern take on synthwave, but it’s also special for being a record in which no song was ever composed, written or recorded with the band members being in the same room. How you may ask? Well, technology, that’s how. In fact, the quintet has never made music in the same room together ever since forming in 2017!

Sleeping Visions is a triumph for Loveblind, with the album acting as a culmination of months and years of hard work. It may have required uncountable file transfers, phone calls and Facetime sessions, but every member worked extra hard to put their best foot forward during the writing and recording process. It wasn’t necessarily as difficult as it sounds, with each party having a wealth of experience writing and recording music in the past. The group is composed of very seasoned musicians, including Saint Marie Records owner Wyatt Parkins who first began working with Joshua Garman of Crash City Saints. The duo began rounding out a lineup when they found singer Dorian Electrique and bassist Mikel Wegener, both of Berlin shoegaze band Seasurfer. Whimsical’s Neil Burkdoll finally rounded things out on guitar.

With Sleeping Visions now out, Loveblind is raring to go. In addition to the premiere of “White Piano, Black Dress,” the band has been kind enough to offer us a track-by-track rundown of all of the behind-the-scenes details on the writing of Sleeping Visions. Who says musical chemistry is dependent on atmosphere and proximity?

“The industrial beat of ‘War Planets’ was created on a KORG Electribe, and in a way, it foretold how this song would play out. We are all huge fans of the 1990’s band, CURVE, and really let their influence show on this track. We knew once this track was done it had to be the opening track. It was the second song we completed for the album and really helped set the tone for the rest of the record.”

“This was the first track the band ever recorded, which is why it is the title track. It was the first song I started on my own before the band formed where I felt like I had something, and it was time to add members to form a band. Loveblind was almost named Sleeping Visions, but we later settled on Loveblind, which comes from an early Secret Shine song by the same name.”

“A song I had started before the creation of Loveblind just for fun. ‘Daydream’ is a perfect example of our dream pop influences rising to the surface. Like most of the tracks on the record, you can hear the heavy use of a 1990’s Digitech XP300 Space Station pedal that will easily set you back 500 dollars nowadays if you can find one. Come on Digitech, reissue this pedal!”

“‘Goodbyes Without Goodbye’ was another song we used the KORG Electribe on. The sounds we are attracted to on the Electribe are very dark and electronic, so the song definitely has that vibe. It takes a unique, some might say, unusual turn on the chorus. Jumping back and forth between a dark, throbbing beat and a hopeful, beautiful melody.”

“This track started with drum loops and variations of the loops with triplet delays added. The previously mentioned Digitech XP300 Space Station pedal really stands out on this track, used as a thickening agent of sorts throughout the song, giving it a very ‘spacey’ sound. We wanted something more mellow, and this song delivered.”

“A song brought to the band by Dorian and Mikel that we instantly loved. It had a trip-hop vibe to me when I first heard it, so we worked on adding elements to make it even more trip-hop but also elements that made it truly a Loveblind song. It’s a darker song musically and lyrically. The video for this (which we will release in the coming weeks) is also very dark and fits the song perfectly.

‘I saw the guns of the world in a cupboard. I saw you crying alone.’”

“One of the last songs recorded for the album but a band favourite. I believe this song shows how well we had started to mesh and the potential for future tracks from the five of us. While visiting a friend of mine in Austin, Texas (Elliott Frazier of Ringo Deathstarr fame), he added his unique touch of feedback-driven guitar you can hear throughout the track.”

“Being a huge Smashing Pumpkins fan, I knew I wanted to cover a song of theirs but not a ‘hit’ per se. ‘Saturnine’ comes from their Machina 2 album that was released for free on the internet back in 2000. An updated version was also released on the two-disc version of their Greatest Hits album. We decided to mesh the two versions as well as make significant changes/additions to make it our own. Most people that hear the album will probably never know it is a cover song.”

“Another song I started in the years leading up to the formation of Loveblind. I had shared the song with Neil when originally working on it, so he reminded me of it and said we should complete it as a Loveblind song. As expected, the song changed significantly once the band started working on it, but the core is there, and I’m glad to see it make the album. Dorian and I had often talked about wanting to do a song with spoken words. She surprised us with the middle section of this song being spoken word, very much in the vein of Piano Magic, which is one of my favourite bands.”

“A song started after listening to some early Starflyer 59 records and a song that landed nowhere near its original destination. A beast of a song coming in near the seven-minute mark. I believe Joshua said after hearing the final version, ‘I think we just invented Prog-Gaze.’ The song in some ways is three songs in one, but it works. With all of our other songs being within 30 seconds of four minutes, we wanted to do a longer song to end the record. The song definitely takes you on a trip.” 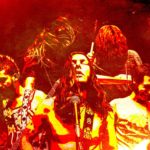 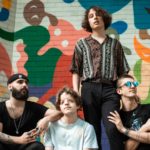