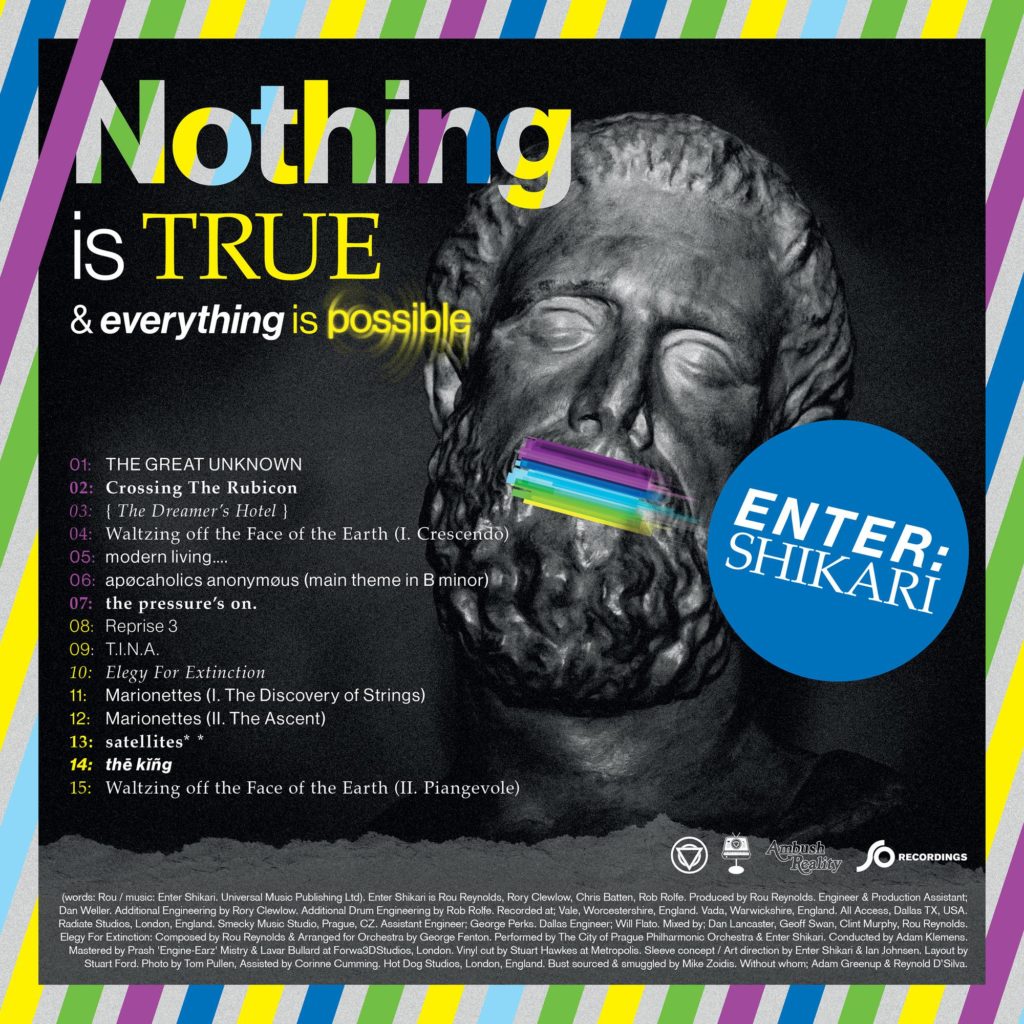 Enter Shikari – ‘Nothing Is True & Everything Is Possible’ [Album Review]

Enter Shikari is a band that has always defied being placed in any genre-box. Every album has been different, be it their humble, heavier debut in 2007 or their last release, a more subdued post-rock/alternative-sounding fifth album, The Spark—their sound has evolved with each release. However, the one constant has been the in-your-face, politically and socially-motivated lyrics, confronting big issues like climate change and sustainability, government corruption, tribalism, and much more than could be summarized or done justice here. So, it’s no surprise that their sixth record, Nothing Is True & Everything Is Possible, sees the group professing many of these same messages in their songs, and fusing an array of genres and elements from across their vast discography to create something that feels new, yet familiar (in a good way).

Enter Shikari has never been very veiled in their values, which broadly align with the progressive sentiments of the younger generations–i.e. Millenials and Gen Z–who have come of age with the band’s music and who are trying to rise to the challenge of picking up the pieces of a broken system and fragmented world order that has been left to them. If anything, the album feels incredibly timely. Amidst a pandemic and global crisis where some world leaders are sowing discord and divisiveness and lining their own pockets instead of doing what’s best for all, there’s no better time for the dire yet optimistic message on this record, and no better messengers than this impassioned four-piece.

The album opens with bouncy number “The Great Unknown,” with frontman Rou Reynolds asking the question “Is there anyone out there? Just give me a sign…” This sets a tone for a record that explores the now, but also looks to what could be, as during “{ The Dreamer’s Hotel }” which sees Reynolds envisioning an idyllic escape from the polarized and politically-fractured modern society. The song, which was the first single released off of the album, captures the essence of the band’s sound across the past five albums, from the intro of the song that features Reynolds’ signature angry vocals over aggressive synth beats to an infectiously catchy, melodious chorus. As in past Enter Shikari records,  there are a few songs with major orchestral elements–see “Waltzing off the Face of the Earth (I. Crescendo)” and “Waltzing off the Face of the Earth (II. Piangevole),” and even more so in “Elegy For Extinction”–that flow perfectly with the rest of the record and really elevate the band’s sound.

Indeed this album as a whole really threads the needle, coming in musically as more of a compromise between The Spark and The Mindsweep. The result is nothing short of magnificent–look no further than the synth-laden tracks “T.I.N.A.,” “the pressure’s on,” and two-part track “Marionettes (I. The Discovery of Strings)” and “Marionettes (II. The Ascent),” or the more rock-forward, anthemic “modern living…” (which is just so perfect for a huge sing-along, I can’t wait to see it live). There’s even a major call-back to the album that started it all in 2007, during an interlude, “Reprise 3,” where a computerized voice sings, “And still we will be here….” This record is just so dynamic, apocalyptic…hopeful–the perfect soundtrack to our collective quarantine.

Enter Shikari have combined the best elements of their past and present into one, fantastic creation that is sure to please both diehard fans and win over newcomers as well; not to mention surely see the band rising into bigger headlining slots and tours globally. Personally, I can’t wait to see where this record takes them, and how they will evolve next.

Nothing Is True & Everything Is Possible Track Listing: