LA-based quintet Love Ghost is a preternaturally talented group of youngsters barely out of high school. Drawing on the grungy, hip-hop-meets-rock, sardonically sunny ‘90s, these guys come across as nostalgic – for those of us that remember the decade – but with enough modern shaping to remain original and fresh. With a few banging singles to their name, the band’s latest release “Chasin’ Money and Bitches” – out March 27th – is another sleek addition to their growing catalogue.

The tune also comes with a lively video sure to provoke some laughs as audiences follow Love Ghost from a boring classroom, through the streets of their local Los Angeles, to a full-blown dance party. As the video begins to gain traction, we are happy to have lead singer Finnegan Bell join us as he recounts the experience of shooting “Chasin’ Money and Bitches.”

– This video was hella fun to make. We made it in two days, and it felt like a non-stop party. It was really great to work with SK Films, Julian is amazing and very talented. The first day we did all the exterior shots in some of my favorite parts of Los Angeles, Boyle Heights and Glendale. Shout out to my homie Noah Martinez for letting us shoot at his grandma’s house. We also shot at Hoover High, a liquor store, and at State Street Recreation Center. We got a ton of footage of us just cruisin’ through those areas as well. We got into some mischief that day as well, which I think made the day much more memorable.

While driving around we got pulled over by the five-0, and it was funny because it was actually our first shot of the day.  We were worried that we were all gonna get arrested and not be able to film the rest of the video. The car was a rental so we didn’t have any registration and the driver (Samson) forgot his license that day. We didn’t have any permits to be filming, so that made the anxiety rise even more. It was me, Ryan, Samson and our homie Blvc Svnd in the whip – shout out to the homie Blvc Svnd for making a guest appearance in the music video. We were all driving around, bumping music, laughing, having a good time and Ryan was sitting up on the trunk and had his legs hanging outside of the convertible.  We drove by a cop and immediately tried getting back into place. The cop car put on its sirens and pulled us over. The cop was angry with all of us, but she was especially furious at Ryan, so she gave him a ticket and now he has to go to court. We are really grateful that the situation didn’t get any worse tho.

Check out our exclusive gallery of behind-the-scenes moments from the video shoot: 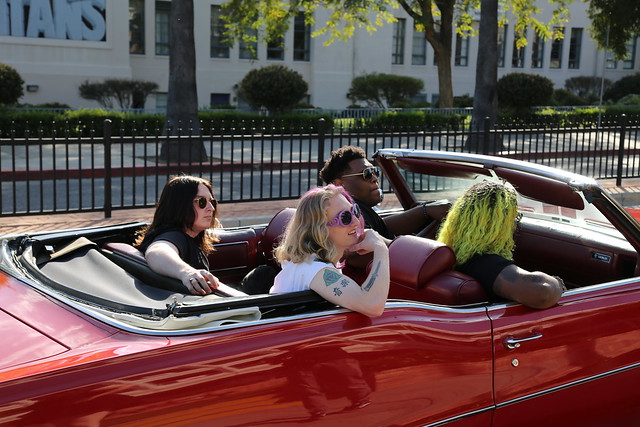 We then drove to a liquor store and Julian filmed us dancing and mobbin’ it in the store. We grabbed all the 40s and hot Cheetos and flashed them at the camera, meanwhile, the cashier was just standing with his jaw dropped to the floor. After the song was done we put everything back neatly and started to jet, but he came outside screaming “ThaT iS IT?!” “ThaT IS It?!?!” “THIs Is NOt CooL, WHat YoU haVE DoNe TODaY!” We bounced after a little bit, but it was pretty insane.

The next day we shot all the party, performance, and classroom scenes, it was hella fun. We asked our friends, and they asked all of their friends, to be in the video, and we ended up getting a great turn out. To everyone that was involved in the making of this project, we are extremely grateful for the love and hard work that you put into this. This music video is supposed to be fun, and so is the song. I really hope that it brings you some joy and some laughter, especially during these hard times.