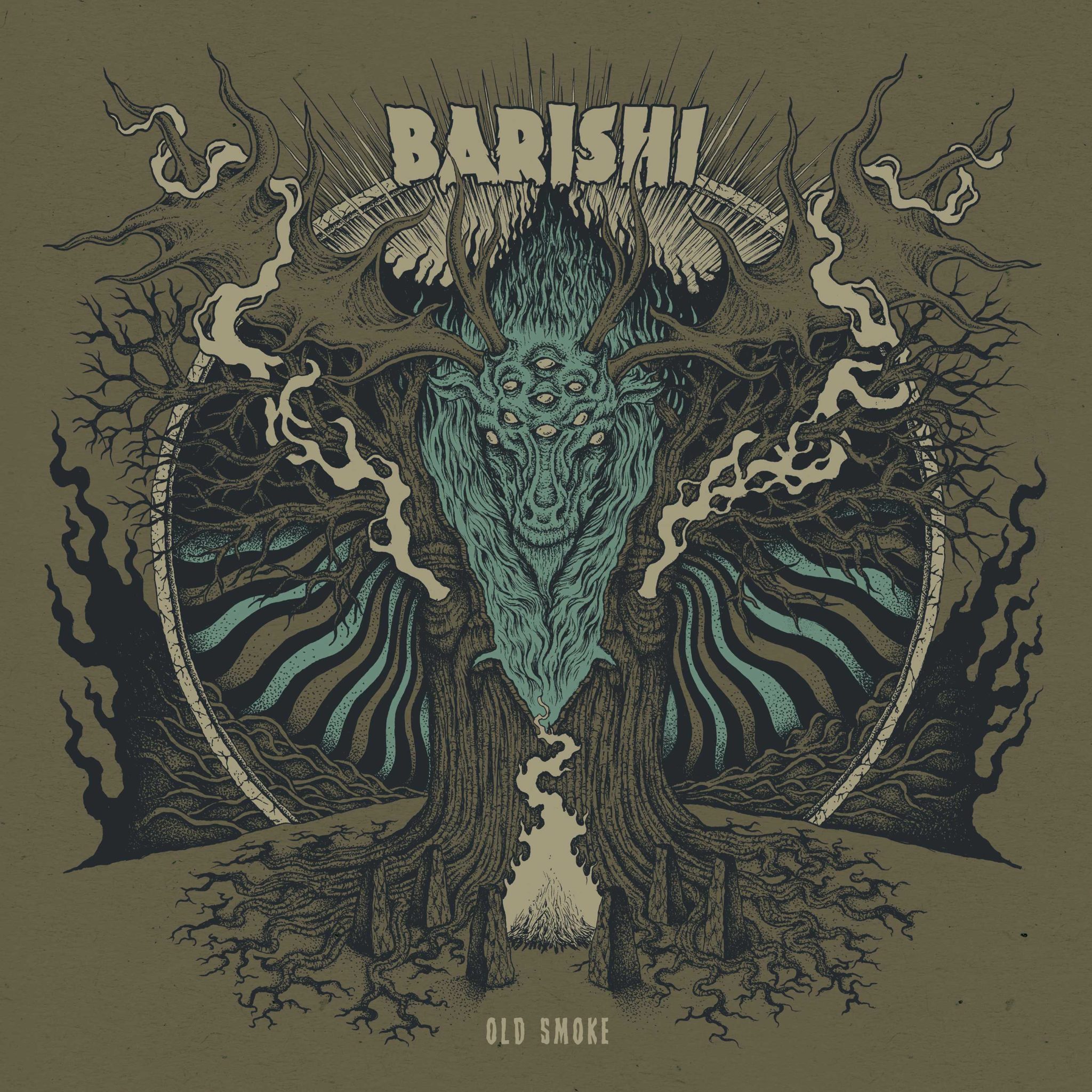 With a passion for tradition and history, Graham Brooks started Barishi (previously known as the instrumental act Atlatl) in 2012. With Sascha Simms on vocals, they released two records together until Simms’ departure in 2016 when Brooks began taking the vocal charge. Since that time, the triplet has delved into darker, more experimental territories, with 2020’s upcoming release, Old Crown, the result of this exploration.

While maintaining a predominantly doom metal sound throughout Old Smoke, each track is interwoven with experimental genre-bending. The progressive, Mastodon-like sludge writhing through “The Silent Circle” and “The Longhunter”; the death metal aggression of “Blood Aurora,” alongside Brooks’ black metal rasps and low growls permeating the record makes Old Smoke interesting at all angles. Brooks mentioned that their goal with Old Smoke was “writing longer songs that went somewhere without them being cumbersome,” which they have certainly achieved; cumbersome is the antonym of Old Smoke’s content.

Each track on Old Smoke is unique, and its force aided massively by drummer Dylan Blake, who provides much of the foundational push to malevolent and curious territories explored on the record. The little touch of a sample describing a flesh-eating man at the beginning of “The Longhunter” also adds a level of dirty depth to the track and adds to its enticement, even though it may not be the most original. Old Smoke’s sounds flow together nicely and follow some kind of progression, except for the instrumental intermission “Cursus Ablaze” which feels somewhat ‘placed’ in the middle of the other tracks and doesn’t add much overall. The jump from that track to “Entombed in Gold Forever” is also quite sudden and unexpected, causing a slight jar on the listening experience; though that might be the intention.

Their 2013 self-titled debut featured Sascha Simms on vocals and had a more melodic, upbeat nature to its entirety with harmonizing vocals and up-scale instrumentals. Since then, Barishi sound more certain of themselves and with more direction, and certainly more force. Through the outfit’s maturity has been born a multi-horned beast, and after delving through Barishi’s discography, their direction to a darker, heavier sound makes total sense. Brooks’ vocal presence works very well alongside the occasionally evil, permanently crushing new sound of Barishi. His low growls pair with Jonathan Kelley’s deep, resonating basslines (which are ridiculously infectious throughout) and his high rasps in “The Longhunter” take the band into black metal territory blended with harsh noise.

While Simms was a strong vocalist indeed, the group has been able to focus on the combination of their preference for elaborated instrumental sections and a varied vocalist which works to strong effect. This effect is perhaps strongest felt on the unexpected approach of the title track; a return to the more progressive, open soundscapes experienced in Barishi’s self-titled record, with less focus on crushing riffs and more on the collaborative expanse of progressive instrumentals; almost as if Mastodon and Pallbearer fused at the seams. Brooks’ curious, Agalloch-ian rasps are still dominantly present, but the instrumental direction of this track, in particular, was an innovative standout on Old Crown.

Barishi’s developed and fresh sound within the elaborate cacophony that is Old Smoke is voluptuous, to say the least. Its twists and turns are infectious, and the development they’ve made since their self-titled debut effort seven years ago is clear. With support from Season of Mist and development of this multi-faceted beast of a sound, Barishi is looking to be a promising outfit in the contemporary doom arena. It’s safe to argue that Old Smoke is “album of the year” material.