Attraktors are aiming to do a little attrakting of new fans today thanks to the highly attraktive new song, “Future Systems,” taken from their self-titled album due out July 3rd on Vivod Records. For a trio, they put on an impressive display of sonic creativity with “Future Systems,” a tune with a distinctly 1980s sound and vibe.

If you are aware of acts such as Six By Seven, Bivouac, The Selector, and The Nectarine No. 9, then you already know some of the members that compose Attraktors. The musicians have bonded together to conjoin the best of krautrock, kosmiche, space rock, art rock and synth-pop into their own aural output. If you’re familiar at all with ‘80s krautrock innovators Kraftwerk then you’ll notice where from some of the influences for “Future Systems” came. As if they were robots, the band commented, “Future Systems – Action Statement. Perform – Standard Bearer. You cannot execute your commands. You generate – Syntax Error.”

What makes Attraktors’ new album distinctive is its English character. There’s a spirit of Brian Eno, Gary Numan, Human League, and David Bowie burning bright throughout its ten tracks, not to mention lesser-known German influencers like Harmonia, New, and Klaus Schulze. It’s really just about as new wave you can get, long after the era of new wave. It’s hard to do one genre well, let alone five or six but Attraktors somehow pull it all off. The record’s release is also special to Vivod, as it’s the first of many LPs to come from the still-emerging label founded by DJ, musician and producer Ali Renault.

Now that we’ve attrakted the hell out of you, what more can we really say? It’s time to follow through on those innermost attraktions for Attraktors! 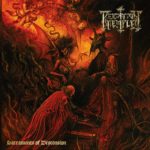