Vancouver’s Spell have been honing their retro metal invasion over the past seven years and two full-length albums. Their sound is rooted in classic heavy metal but infused with vital elements derived from the likes of Rush, Blue Öyster Cult, and several other ‘70s and ‘80s prog and metal inspirations. That said, they have a sound all their own that evokes both nostalgia and excitement.

Opulent Decay takes what they did on both 2014’s Full Moon Sessions and 2017’s For None And All (both wicked records in their own right) and pushes it to a new, more evolved area of music. The production is slightly thin which recreates the norm of the classic era, but the strength of the songs has more than enough oomph to break through. On top of that, the talent of the three players is on top display, and they’ve never sounded tighter, more in-sync, or confident.

Album opener “Psychic Death” is the perfect way to pull you in – the rolling heaviness is offset by uber-melodic guitar lines and proggy introspection. That, and it rocks like a bastard. The ironically named (or on-point direct inspirado) of “Deceiver” is Judas Priest cloaked warmly in a mini-epic robe, but the journey belongs totally to Spell. Other highlights include “Primrose Path,” “The Iron Wind” and the final track, “Saturn’s Riddle,” but there’s zero filler anywhere and the album is 46 minutes of leather, denim, and balls-out heavy metal bliss.

The other drawcard is the overall concept, which vocalist/bassist Cam Mesmer describes here: “All of the songs deal with the contrast between opulence and austerity, and the decay that results from imbalance. Our drive to avoid suffering is strong, but it can be overcome by the love for another and the desire to put them before yourself. Opulent Decay examines this balance and the dangers that await on either side of the pendulum.” It’s heady stuff that could’ve been taken to ludicrous and indulgent lengths, but the band gives it a very human and emotional spin that talks to the everyman (as Rush always did with their numerous intelligent themes).

Spell has made a most enjoyable and lyrically rich album with Opulent Decay, and it will easily speak directly to fans of classic, prog-esque metal with all the required bells and whistles. It rocks hard and heavy with balls and something to say, and for folks looking for something positive and entertaining in this trying global time, we couldn’t ask for more. 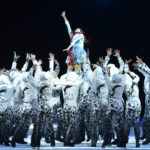 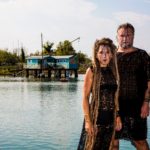