The thing I loved about Angelcorpse, and now Perdition Temple, is consistency. Not to mention you always get your bang for your buck. No need for a receipt: no bullshit, just straight forward, in-your-face, blackened death metal. There’s no guessing game of what avenue the band might turn or venture down; It’s always precise pedal-to-the-metal, balls-to-the-wall, intensity. Clocking in at thirty-two minutes and seventy-nine seconds, Sacraments of Descension gives Slayer’s Reign in Blood a run for its money in how much gun powder you can shove into a single shotgun shell. But I digress…

I was hanging out backstage with a prestigious Chicago death metal aficionado discussing music. I brought up a band I knew he hated, and I still love to this day, but he mentioned Angelcorpse, and that squashed our deliberation. I fully fell in love with Angelcorpse. Somewhere along the line, founding members Peter Helmkamp and guitarist Gene Palubicki parted ways. I don’t know the story, and at this point it’s irrelevant. So why am I talking about it? Because, although it began as a sideband, Perdition Temple is now the backbone of what was once Angelcorpse.

God, I love the speed, ferocity, and insanity of the music. It’s almost like a freight train coming and you’re waiting for it to derail, but, even if you put a quarter on the tracks, it never does. Sacraments of Descension, written solely by Palubiicki, is like Morbid Angel on crack and Tide pods before Morbid Angel sucked. The guy is a riff conductor on the highway to hell, living life in the fast lane. Eight ripping-ass tracks of maniacal madness unhinged at every level of consciousness. This album will hit you with a fervour that never looks back, leaving you as yet another dead train-bum ripped and torn into shreds on the crossroads of metal and mayhem.

There are moments where I believe the leagues of death metal have crossed too many boundaries, but I’m an old spirit that doesn’t like change or morphed sub-genres. I have no idea where ‘we the people’ are headed, but 2020 has started as a shit show. Thankfully, albums like Sacraments of Descension makes one want to run independently and skate on banana peels, stealing toilet paper in the great skate-bowls of life, ollieing over the railroad crossing that blatantly states “Do Not Enter or Cross Tracks.” 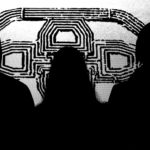 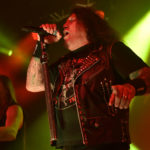