It’s time you bust out of that love coffin you’ve been in lately and indulge in some Danish rock music. It’s only been a couple of years, but The Love Coffin has quickly climbed the ranks of their local Copenhagen music scene, beginning with the release of their 2018 debut record, Cloudlands, which demonstrated their potent potential for clever songwriting. Well, if you were one of the OGs with The Love Coffin, then you’ve seen the group grow, evolve and now it’s time to reap your reward with the release of their sophomore record Second Skin, via Bad Afro Records on April 24th. While Cloudlands showed promise, Second Skin nicely rounds all of the hard work into form.

Fortunately,  though, if you’re aching to hear the band’s new material, you’re in luck as today we’re debuting the track “Mortalized,” single number two off Second Skin. Produced in tandem by guitarist Kristian Alexander Pedersen and well-regarded producer Guy Fixen (Pixies, Breeders, Stereolab), this is perhaps the band’s most stellar single yet.

While you may assume that Fixen just gave the song and the album a once over and had little to do with its creation, he in fact believes so wholeheartedly in The Love Coffin that he spent a few weeks in Copenhagen working with Pedersen and the rest of the guys. What differentiates Second Skin from its predecessor is the sonic diversity of its ten songs, with more upbeat numbers such as “Seasick,” but also more melodic tracks like “A Shrinking Thing.” It’s a whole new level for The Love Coffin and it should have you feeling very optimistic about the recording’s coming release.

With such a stellar new track and the cool city from which they hail, we wanted to learn more about The Love Coffin so we spoke with lead singer Jonathan K. Magnussen to get the lowdown on our inquiries.

First, let me ask you about this name The Love Coffin. It’s very creative and thought-provoking in itself. How was this name conceived?

Jonathan K. Magnussen: “We just thought it sounded good and looked like a name you would notice looking through records. There’s a lot of songs about love, so I guess you could make a connection between the music and the name if you wanted to, but that was never the idea when we picked the name.”

Your new single “Mortalized” is one of the highlights off of your new album Second Skin. Take us deeper into the meaning or interpretation behind the song.

“The song is primarily about aching and dealing with the consequences of one’s actions. It also has to do with not knowing what you want from life before you either get it or lose it. And as for most of our songs, we’ve tried to mix different styles and genres that we like.”

You worked on “Mortalized” with producer Guy Fixen who’s been in the industry for a long time, working with Pixies, The Breeders and Stereolab, among others. How did you and Guy hook up for this track?

“Well, we did the whole album in a row with him, or at least all the ground elements, drums, bass, acoustic guitar and so on, so the song wasn’t that different to track than the other songs. But he was very humble, professional and nice to work with. Very good at bringing our ideas to life and only wanted a break, when we had our daily meal. A very sweet and hard-working Guy.”

Second Skin hints at dealing with some kind of criticism or rejection, but I could be way off. Is there some kind of deeper meaning behind the album’s title or the meanings of the songs?

“I think we all like things, that doesn’t necessarily prove its point in one clear direction but are fit for interpretation. At the same time, it has a kind of obvious ring to it, now that it is our second album. It could be a hope for the better, a new start, it could also be a rejection of one’s inner feelings, a kind of mask.”

We don’t speak to many bands or musicians from Copenhagen. What’s the local rock scene like around the city? Is it a really active scene with lots of bands and venues?

“Copenhagen is not big enough to say that it has its own rock scene. But what it does have is a really active scene that grasps a lot of different genres and people and the venues are very keen to give most a chance. A lot of interesting things are going on here.” 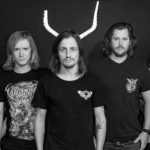 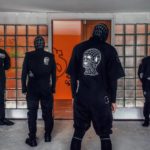