Oftentimes, we feature young musicians eager to get their foot in the door. It’s rare that we get to shine a spotlight on those who have been playing and recording music for four decades and, with that said, enter James Clark Hangover and the premiere of the new EP, There’s a Wolf on My Street.

James Clark Hangover is the moniker of David Clark, a talented musician who came up in the 1980s and 1990s, playing in various punk rock groups in and around Toronto, Canada. During this time, he shared the stage with acts the likes of Discharge, Circle Jerks, and Black Flag, just to name a few. By the early 2000s, Clark was ready for a break and, after a hiatus, returned to recording and touring, leading to the creation of James Clark Hangover.

Regarding There’s a Wolf on My Street, and his hopes for an upcoming period of musical productivity, Clark comments, “Inspiration comes from the calendar and clock. I’m a musician and I need to make music. It is where the greatest joy in my life is found. I’ve perhaps been a tad lazy or distracted throughout my life. I need to make up for lost time. My plan is to put out records as frequently as possible from here on. All tunes were produced by Jordon Zadorozny. JZ has done all of my recordings over the last five years, ever since my return from self-imposed creative exile. I love working with Jordon. He makes sure that I keep on target and don’t let details slide. His studio is in Pembroke so it’s great to go there and have no distractions. I want people to move butt and flex their head when they hear the music. Tap toes and dance.”

To fill you in a little more on Clark, some of his early days were spent playing with punk rockers The Terminals before he joined October Crisis. With both groups, he was fortunate to have played with GBH, Discharge, Circle Jerks, and DOA. By the time the ‘90s began, he was living in Toronto where he formed 98DA, a band that made some headway playing live with The Headstones, Our Lady Peace, I Mother Earth, and The Tea Party. 98DA had a solid run, releasing three albums before Clark went through a creative drought where he took a step back from music.

Fortunately, he began to feel musically rejuvenated some years later and what came of it is James Clark Hangover. In listening to his latest work, we can only be fortunate that David Clark is back and perhaps better than ever.

There’s a Wolf on My Street Track Listing: 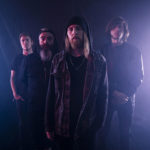 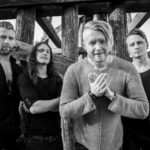 Pumping Metal: Shallow Side Bassist Matt Daniels on How He Structures His Life Around Health and Fitness