Los Angeles-based solo rocker and touring guitarist Dre DiMura has shared a new single and accompanying lyric video titled “But, I Love You.”

Commenting on the new track, DiMura, “…calls the song ‘Baroque-Dubstep,’ and fuses bass drops and super-saw waves reminiscent of the early 2010’s with a classical string arrangement and soaring Freddie Mercury-esque vocals. Equal parts Panic! and Fun, ‘But, I Love You’ could easily appeal to fans of EDM, pop/rock and alternative, and tells a relatable story about the blindspots we create when we’re stuck in a mediocre relationship.”

DiMura is a guitarist for Diamante and tours with acts such as Breaking Benjamin, Three Days Grace, Chevelle, and Underoath. 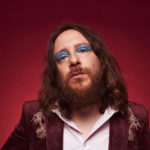