Since the release of their 2017 album, Forever, the hardcore scene has had a huge love affair with Pittsburgh bruisers Code Orange. That album was also the first to see them dip their collective toes into the mainstream metal market. It was a hugely successful move for the band, despite the fact that their sound is largely one equivalent to that of a pneumatic drill going off in your head.

However, the long-awaited release of its follow-up, Underneath, has seen the hardcore favourites rip up their blueprint and give birth to something that can best be described as a monster of a record. A colossal album from start to finish, Underneath, is also an immensely brave one from the band given that, for the best part, Underneath is a record that is uncomfortably suffocating to listen to. Hearing the ferocity with which the band delivers this disc, let’s get one thing clear, this is not an album that will sit well with the mainstream but it is one that, if you like experimental metal, you’ll find extremely rewarding.

Recent single “Underneath” gave fans an early taste of what was to come from the band but, now that the final product has dropped, you can truly hear how far outside the box the group has thrown their blueprint. Stabbing, repetitive industrial samples collide with jabs of chaotic, technical hardcore creating one monstrous headfuck of an album. Songs like the punishing “Sulpher Surrounding” and the truly horrifying “You and You Alone” epitomize not only the direction of this album but also how much Code Orange has truly game-changed the heavy music scene.

As the record progresses you’ll see drummer/vocalist Jami Morgan and guitarist/vocalist Reba Myers flawlessly trading increasingly abrasive vocals, to a soundtrack of industrial grooves, massive hooks and out of control bursts of metallic, technical and chaotic hardcore. Demonstrated perfectly on tracks like “Swallowing The Rabbit Whole” and “Cold.Metal.Place,” the end result is bleak, cold-hearted and, quite frankly, fucking terrifying.

There are many albums out there that require multiple listens before you get to grips with what they’re all about and Underneath is one of them. Whether you’ll find it rewarding depends really on how experimental you like your music to be. While, Underneath is most definitely the game-changer that everyone expected from the band, it remains to be seen if those outside the extreme metal scene have the stomach for this one. 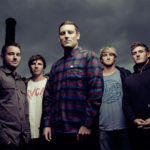 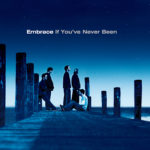