Most of your life you’ve probably been told that “good guys always win,” but we’re going to let you in on a secret; sometimes it’s the bad guys who win. At least that’s true when it comes to Grand Forks, British Columbia band BADGUYSWIN, particularly on their single “Lying To Myself,” for which we’re today unveiling the music video. Due out on April 10th, the guys are ready to unleash their debut full-length, Cowards, tailor-made to give you a different listening experience with each of the record’s twelve tracks. Grunge rock may be a distant spec in the musical rearview mirror, but it’s comforting to know that bands such as BADGUYSWIN are carrying on the tradition of that legendary era.

The group had nothing but praise to shine upon the director for the “Lying To Myself” and the thought process that went into the video’s creation. “This is one of the faster more frantic songs on the album. We wanted our video to have the same feeling. It’s a compelling visual, shot and directed by our always handsome and ingenious friend Dan Brand. Shots of the band performing within an array of close ups and wide angles. Spliced throughout are the paintings (singer, guitarist) Shane (Sherman) created for the album, animated and brought to life causing the viewer to continually question what will happen next.”

As a group of musicians, BADGUYSWIN brings a lot of skill and experience to the table. Featuring three-fourths of the lineup of technical metal band Slagduster, they wear their headbanging-to-early-‘90s-grunge roots on their sleeves. All of the members of the band grew up together so they’ve developed a strong chemistry over the fifteen years they’ve been playing music together in various forms. Hooks and heavy grooves are what you will encounter throughout Cowards, recorded by the members themselves in the studio of drummer Zak Waterlow. So, if this all sounds appealing to you, which we’re certain it does, then get tuned in and jack up the volume already! 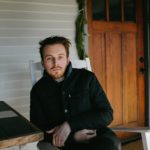 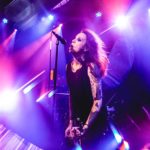 Against Me! Play the Final Show of a Tour Cut Short in Portland, Maine [Photos & Show Review]