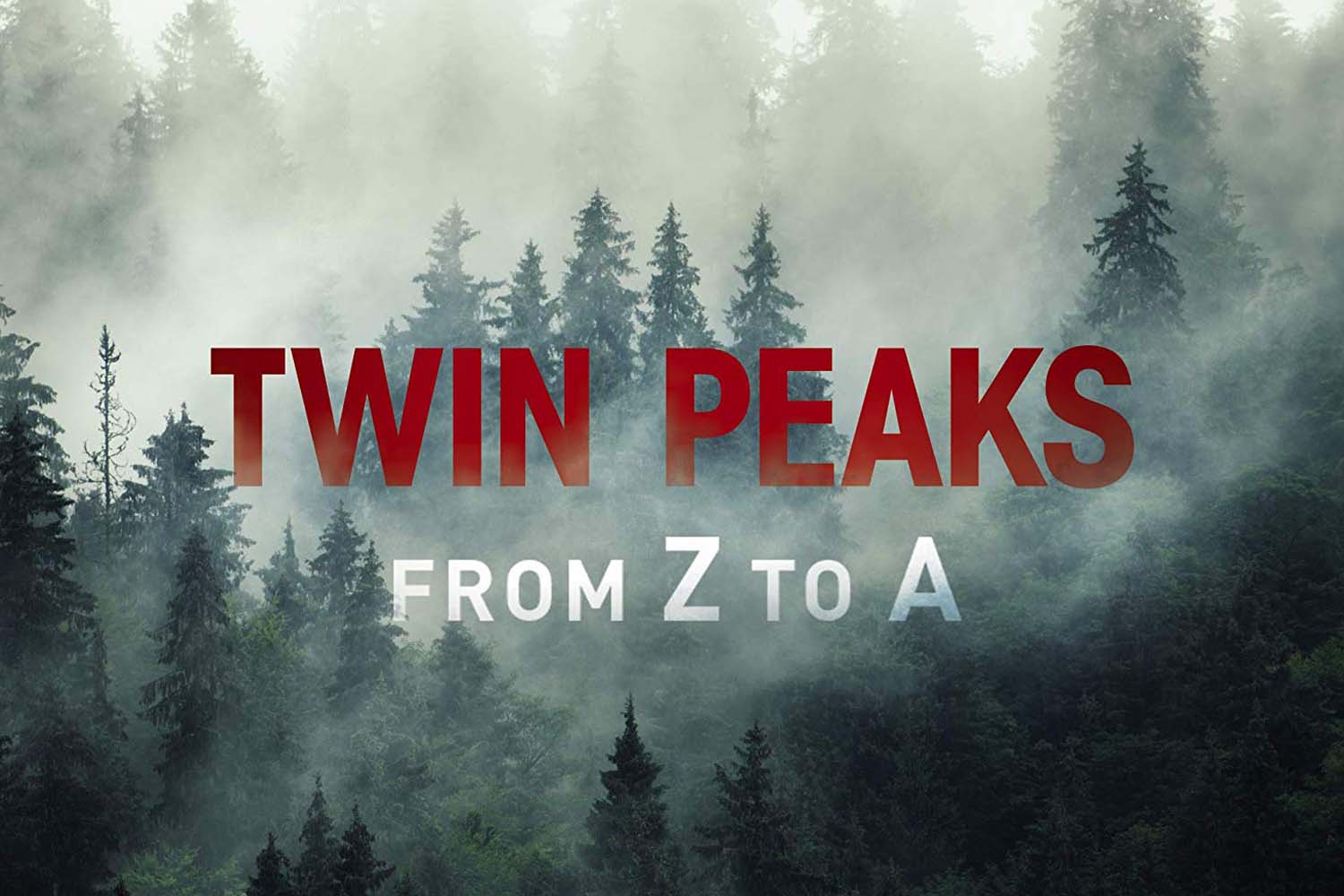 The ‘Twin Peaks: From Z to A’ Box Set is a Definitive Peaks Collectible [Blu-ray Review]

“This is the water, and this is the well. Drink full and descend. The horse is the white of the eyes and the dark within.”
The Woodsman

Limited to only 25,000 units worldwide, Twin Peaks: From Z to A assembles everything Twin Peaks related into one collected package, and takes the series just a little bit further than anything released before. The 21-disc set comes housed in a reinforced, collectible cube that opens flat to reveal a Red Room Gallery diorama. Inside you’ll find:

– A die-cut acrylic figure of Laura Palmer and Special Agent Dale Cooper engaged in their iconic red-room kiss;
– Two fold-out books containing the majority of the Blu-ray discs;
– A separate sleeve housing the 4K Ultra HD transfers of both versions of the original series pilot from 1990 (domestic and international), along with VULTURE: Part 8 of the Limited Event Series (David Lynch oversees both 4K Ultra HD transfers);
– A beautiful set of 25 5″ x 5″ printed cards that individually slide into the packaging to create your own Red Room Gallery;
– And finally, an individually numbered, collectible certificate of authenticity.

Kyle MacLachlan and the cast discuss returning to Twin Peaks after so many years:

This collectible release from CBS Home Entertainment and Paramount Home Entertainment includes all of the existing special features from the previous released versions of the original series and movie, including “The Missing Pieces,“ the 90 minutes of Fire Walk With Me outtakes that have long been unavailable. The motivator for fans who own previous iterations of Twin Peaks packaged media is this: Two standalone Blu-ray discs packed with new special features: “A Talk with Kyle MacLachlan and Sheryl Lee;“ “Behind The Curtain;“ “On the Couch with Kimmy and Harry;“ and “Roadhouse Music.“

“A Talk with Kyle MacLachlan and Sheryl Lee:“ A lovely new joint interview that runs approximately 90 minutes with the actors behind the iconic characters of Laura Palmer and Special Agent Dale Cooper. Moderated by longtime Lynch collaborator Kristine McKenna, the two stars offer a fascinating and unique perspective of the original series and its pilot, “Fire Walk With Me, A Limited Event Series” and their unique experiences working with David Lynch. The interview is warm, insightful, and filled with secrets.

A complete look at all that’s included in the Twin Peaks: From Z to A boxset:

“Behind The Curtain:“ Up-close, behind-the-scenes, making-of footage has been edited in a non-narrative fashion into approximately eighteen 25-minute-long pieces for each of the eighteen parts of A Limited Event Series. These pieces showcase acclaimed filmmaker David Lynch at work. They consist primarily of footage shot by Jason S. A vast majority of this footage was not included as bonus content on the 2017 home video release of A Limited Event Series. These eighteen shorts compiling behind the scenes footage from each episode of the Limited Event Series is exclusive to this new collection. There are hours of footage here that are exclusive to this definitive box set release.

“On the Couch with Kimmy and Harry:“ Harry Goaz and Kimmy Robertson are two of the most beloved and quirkiest Twin Peaks personalities (Lucy and Deputy Andy). Together they candidly reminisce about their fondest memories from Twin Peaks and working with David Lynch. There are numerous laughs to be found in this clip. Kimmy Robertson is a gas, and she’s totally on point in this featurette.

“Roadhouse Music:“ Full-length, unedited versions of all sixteen performances from The Roadhouse Bar from acts including Nine Inch Nails, Eddie Vedder, Chromatics, Julee Cruise, and many others. Some of these clips were edited for time and effect in the episodes they appeared in. Here fans can see and hear the entirety of each performance in high definition. The set also includes a performance of “Sad Song“ from Au Revoir Simone, which was filmed for A Limited Event Series, but never aired and is exclusive to this release. Given the strength of the songs and artists included in Twin Peaks: A Limited Event Series, this featurette is possibly the one fans will revisit the most. Having these songs isolated in this fashion is a treat.

Deputy Andy (Harry Goaz) comes back from the Black Lodge and picks up the mysterious Woman With No Eyes: 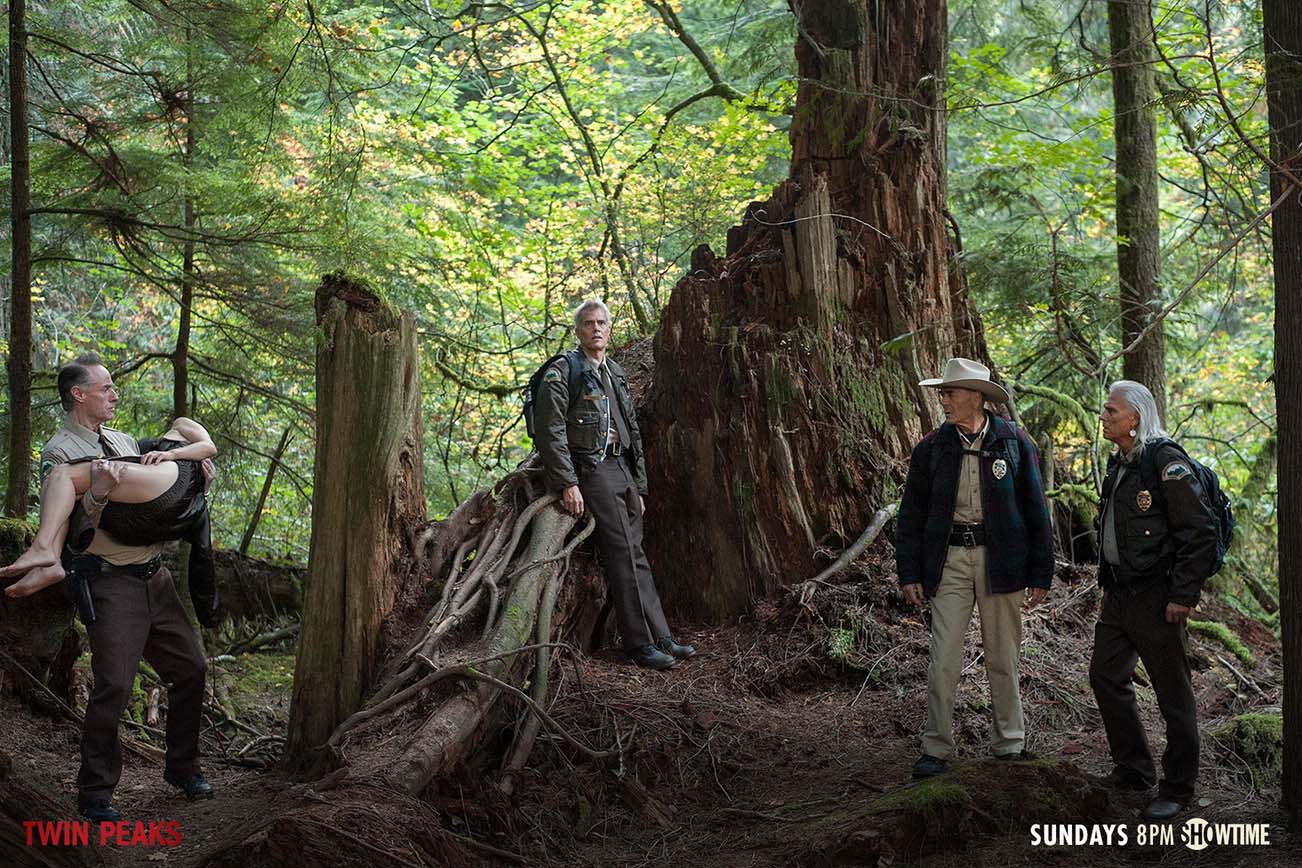 Twin Peaks set the standard for watercooler television when it originally aired almost 30 years ago. The show’s first season is arguably some of the best TV ever. David Lynch and Mark Frost brought something to life in Twin Peaks that has managed to amaze and baffle audiences for years since the show’s initial release.

The demise of Twin Peaks in its second season is now a thing of legend. Under both public and studio pressure to solve Laura Palmer’s murder, the series took on increasingly diminishing viewership, even as the very mystery in question was getting resolved. Once that answer finally aired, much of the show’s audience abandoned the series, leading to a cliffhanger second season series finale episode (directed by Lynch) that yielded more questions than answers. The show wasn’t picked up for renewal for a third season.

The fact that Twin Peaks became so prevalent for its initial first season remains a mystery in and of itself. Why would a television audience embrace a series like Twin Peaks in the first place? It’s not like Lynch was a household name at this point. When the series premiered on ABC in April of 1990, Lynch had Eraserhead, The Elephant Man, Dune, and Blue Velvet to his name. Blue Velvet is a beautiful movie to be sure, but it’s not a film that found a broad audience. Lynch and Frost brought a near-perfect series premiere and subsequent seven episodes to television and fundamentally changed TV from that point onwards. To this date, younger series creators will talk about the profound effect Twin Peaks had on them, and new shows continue to arrive that pay homage to the styles and characters established on the show.

While in the Red Room (a kind of limbo/hell in the thick woods just outside Twin Peaks) in the final episode of the original series, a spirit who looks (looked) like Laura Palmer (Sheryl Lee) says this to Kyle McLachlan’s Agent Cooper. At the time, it was another piece of cinematic weirdness from a show filled with abstraction and strangeness. It certainly wasn’t alluding to Twin Peaks returning two and half decades after it aired, but in a genuinely Lynchian twist of fate, this did indeed happen. Showtime optioned the third season of Twin Peaks, eighteen episodes of Twin Peaks directed entirely by David Lynch and co-written by series creators Mark Frost and David Lynch. Over the spring and summer of 2017, Twin Peaks was once again the show to be watching and talking about. 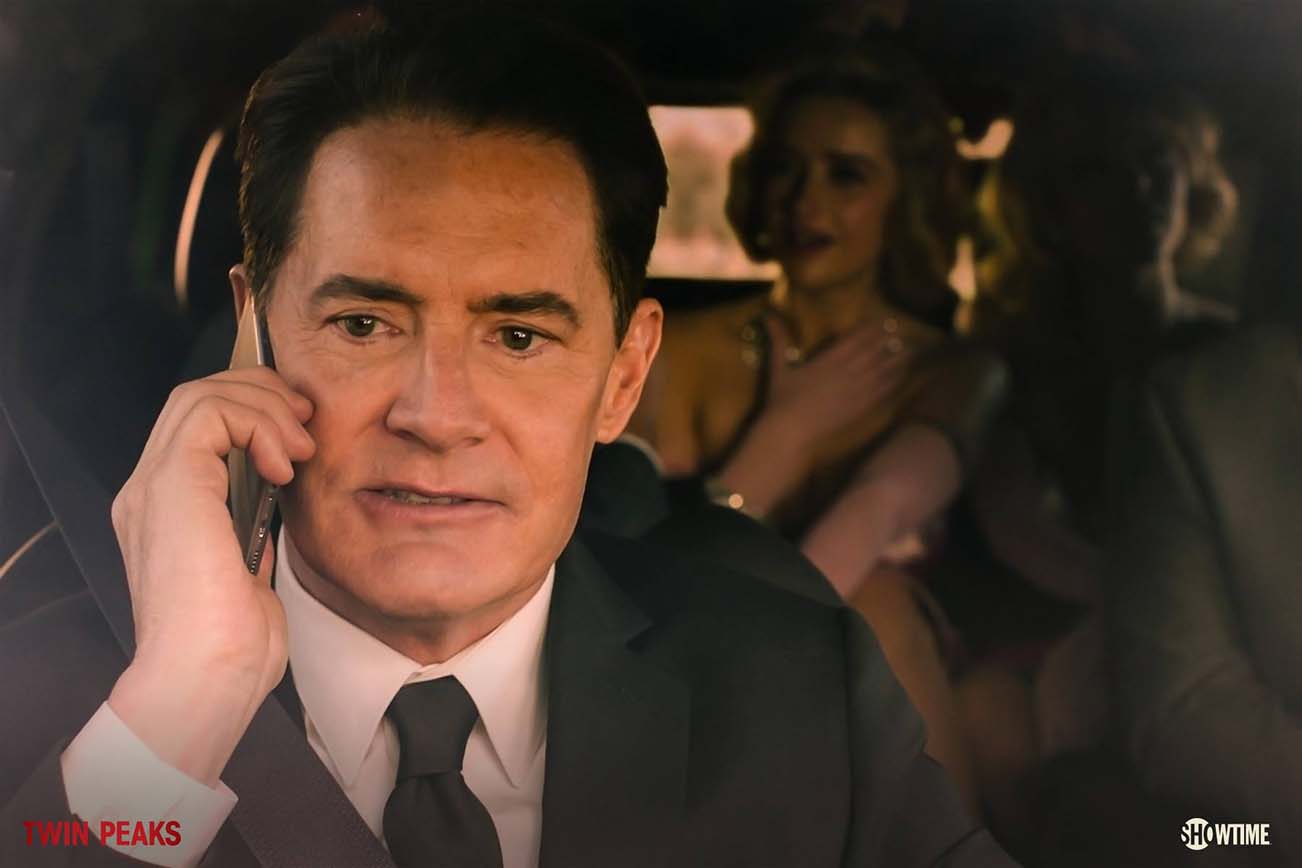 In the wake of Twin Peaks: A Limited Event Series (TPALES) original airing, numerous actors attached to Twin Peaks have passed away. Many of these actors acted their last scenes on camera for Lynch and Twin Peaks. These episodes contain the final work of actors Harry Dean Stanton, Warren Frost, Miguel Ferrer, Catherine Coulson, who all passed away during or shortly after filming these new episodes. Catherine Coulson (The Log Lady) did scenes for these episodes only a few days before she died of complications from cancer (Coulson’s commitment to Lynch and her character being that important to her). Even in death, Don S. Davis (Major Briggs), Frank Silva (Killer Bob), and David Bowie (Phillip Jeffries) feature into these new Twin Peaks episodes in some truly original and surprising ways.

A series that started around a murder mystery of a high school prom queen has evolved into a cinematic transcendental meditation on life, small-town eccentricities, and evil incarnate. Like a fine cup of coffee, Twin Peaks is smooth, refreshing, hot, and occasionally bittersweet. And it remains some of the very best television, and the very best David Lynch cinematic moments ever captured on camera.

Don’t wait! Get one of these Twin Peaks: From Z to A sets before they are gone from retailers and will reside only on the aftermarket at inflated prices. It is the definitive Peaks collectible. 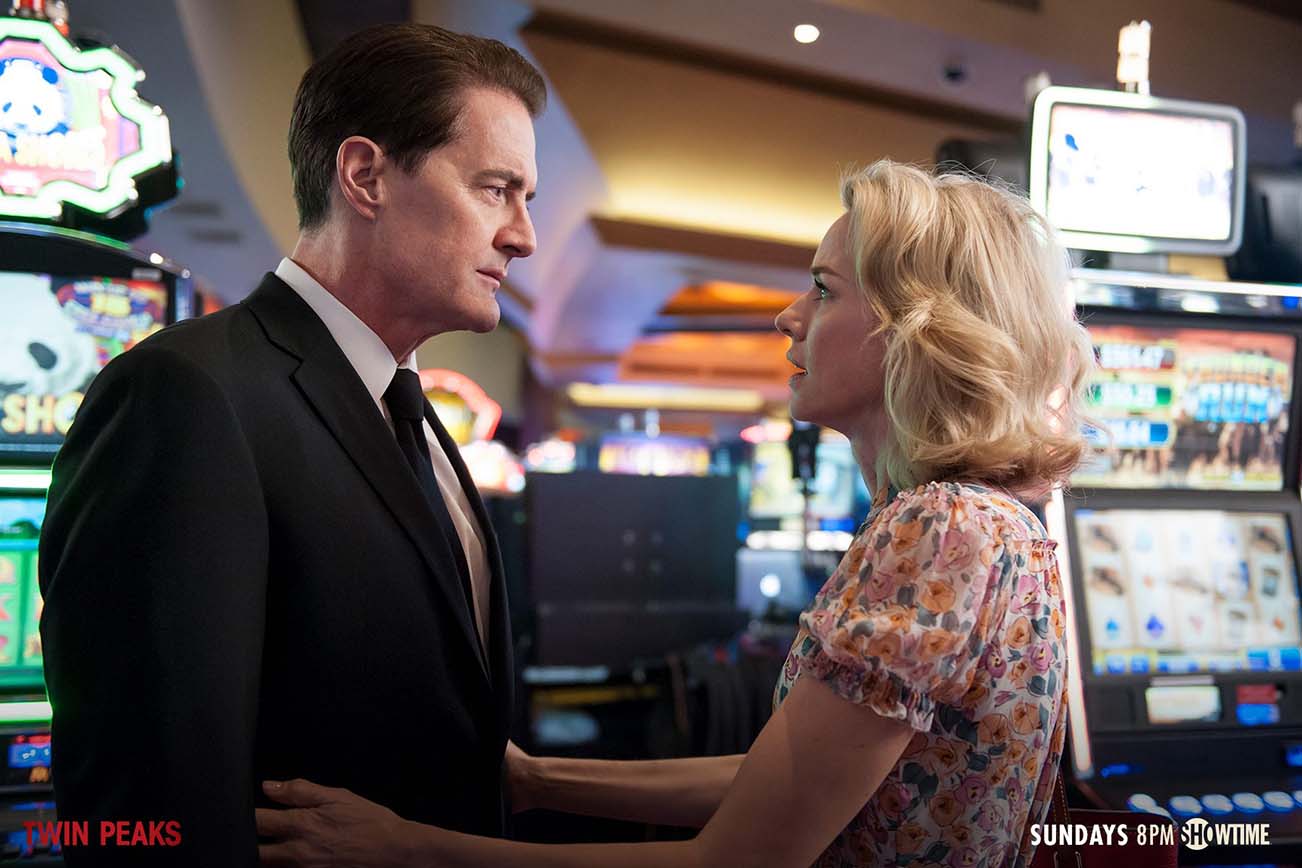