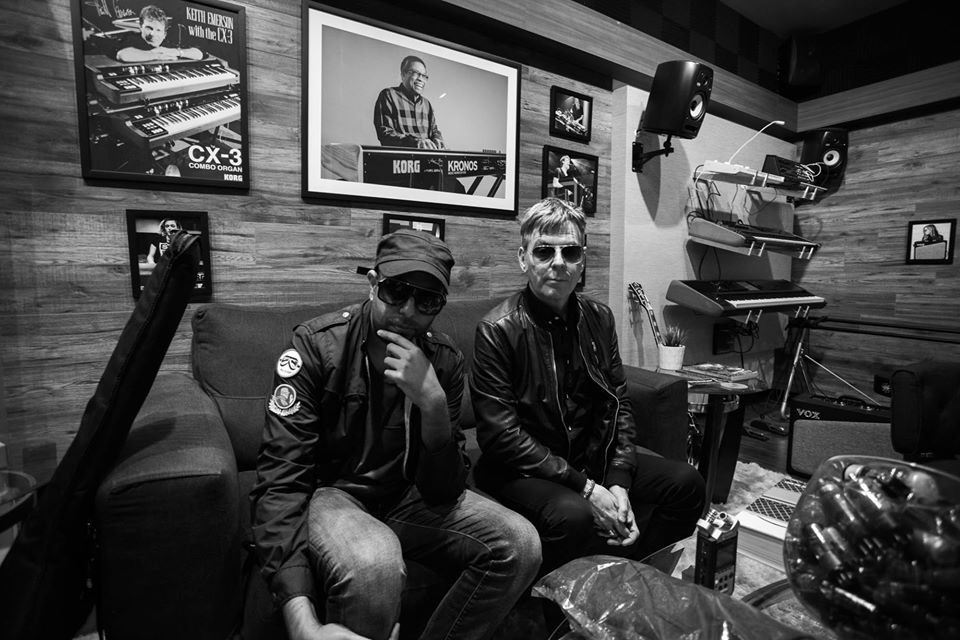 One of the most revered bass players in alternative music, Andy Rourke helped craft the iconic sound of the ‘80s with The Smiths, who critics have referred to as the most important alternative rock band to emerge from the British independent music scene of that decade. Based in New York City since 2009, composing, writing and recording on various projects while living as a New Yorker, Rourke has performed regularly as part of a variety of projects post-Smiths, including work with Smiths member Johnny Marr, The Stone Roses’ Ian Brown and Mani Mounfield, Sinead O’Connor, The Pretenders, Badly Drawn Boy, Killing Joke, New Order’s Peter Hook, Paul “Bonehead” Arthurs previously of Oasis, and D.A.R.K. featuring The Cranberries’ Dolores O’Riordan.

Rourke is now teaming up with British frontman and guitarist KAV, also known as Kav Sandhu, to launch their new band together, Blitz Vega. Based out of Los Angeles since 2010, KAV helped Shaun Ryder reform The Happy Mondays in 2004, getting the band back together and onstage to 10,000 people on London’s Clapham Common for their first show in years. KAV went on to tour internationally with the Happy Mondays for four years, co-writing their album Unkle Dysfunctional as well as the title track “Playground Superstar” from the soundtrack to the soccer film GOAL!. He’s also guested live with Datarock several times and recorded a music project with the late, international fashion icon Zombie Boy.

The two ex-pats have been working on new music as of late and have a new Blitz Vega record on the horizon for 2020. To learn about this and more I spoke with both Andy Rourke and KAV by phone in December 2019, as embedded below for your listening pleasure. More on Blitz Vega and its founding members can be found online by visiting his Facebook page and/or Twitter.

How or when did you two first meet?

Kav Sandhu: “Well, I was in a band that I originated in my hometown, Manchester in the U.K., and it was a young band. I was 17 years old and we were playing in Manchester and quite a lot of members from some of our favourite bands showed up. So Andy was there, and members of New Order, Oasis, Stone Roses and Primal Scream and stuff. So there was a bit of a “who’s who in Manchester” kind of audience and Andy was there and he was really good to us and really humble and it sort of left a really sort of positive impression on me.

Every time I bumped into him over the years he was always really good to me as a young musician. And then I was running some parties, some pub nights in London called Get Loaded and Andy came over to DJ and we stayed in touch and then I was playing Coachella with The Mondays in 2007 and we bumped into each other again and we sort of talked about one day making music together and then forward a few years to a couple of years ago we launched Blitz Vega.”

And Blitz Vega has a new album coming out in early 2020. How long had that been in the works for? Was it actually years or just the conversation was years ago about forming?

Sandhu: “You know, we just started to record. There were no plans or anything. We didn’t set out to make a record or anything. We just made music and it was just kind of going back to the basics of being in a band for the first time again and enjoying it and just sort of vibing off each other and then we just started getting really into it. And we were like, “Ok, wow. We like what we’re doing,” and it seemed like a really natural process for both of us. And that was it.

Then, it just started kicking off and so we recorded maybe 15, 20 tracks. I think we got up to 25 (tracks) to choose ten songs for our album from and then we recorded a live EP at Abbey Road and we’ve been shooting a documentary as well and played a couple of shows as well. So it’s just something that has been really natural without going into some mad master plan or anything like that. Just been enjoying it.”

Andy Rourke: “We’ve been quite busy, when you think about it.”

Check out the artwork for “L.A. Vampire:” 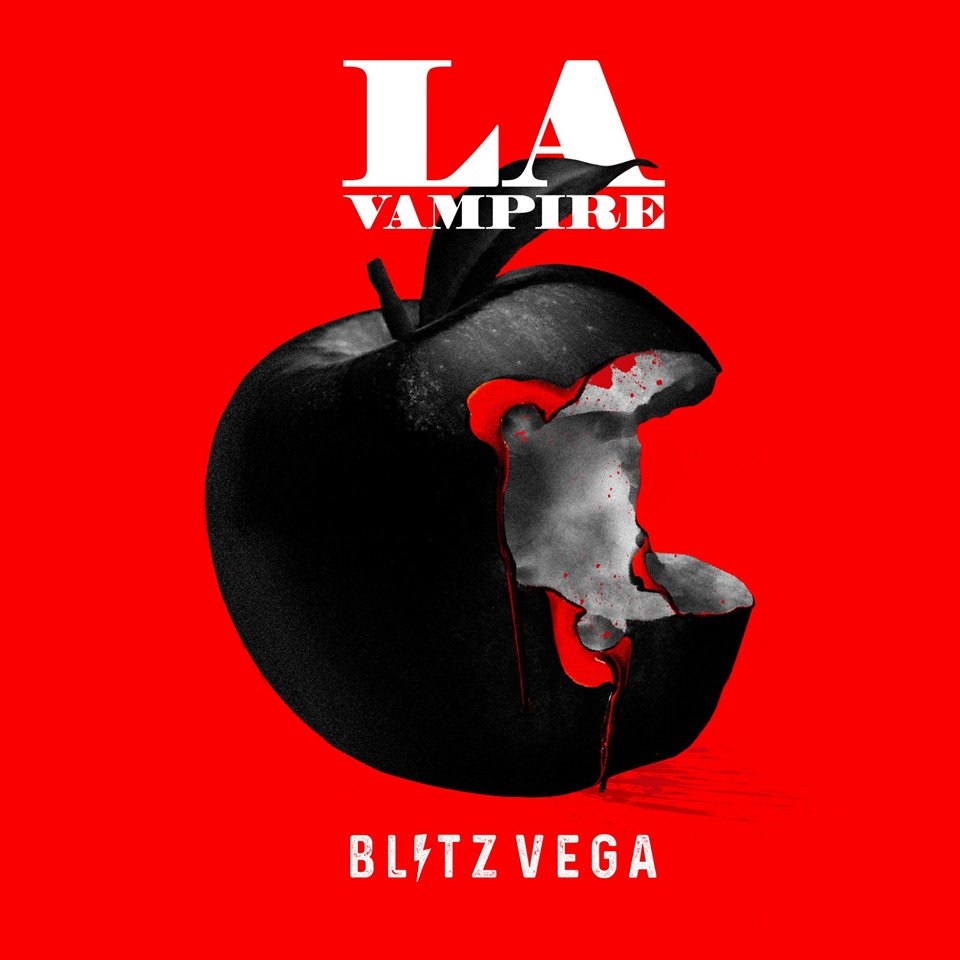 Right, and an interesting thing about this project is when most people hear about it, they’re first going to call it a “supergroup.” I know that term gets thrown around very loosely these days, but how do you think of that?

Sandhu: “You know, it’s definitely something that you can’t stop. It’s better to be a ’supergroup’ than a group that nobody’s heard of, so it’s definitely a compliment. I try not to get a big head.”

Rourke: “Kav definitely doesn’t have a big head. We just don’t really sort of overthink. I mean, to me, it’s not something that you think about, to be honest.”

Sandhu: “Yeah, it’s not a thought. We’re just running a rock and roll band, I guess.”

When you perform live with Blitz Vega do you only do Blitz Vega songs or do you also try and work in stuff from your old catalogues?

Sandhu: “For me, I suppose, I’ve played in a lot of bands. As far as the Mondays stuff goes, I wasn’t really an original member so I wasn’t there in the ’80s and the ’90s and stuff. I joined that band in 2004 so it wasn’t really something that I really needed to think about, I suppose. Me and Andy did speak about playing the odd Smiths tune into the set, but when we played in L.A. a few months ago we decided “No, we’re just going to play the Blitz Vega set and try it out on the audience and see how it goes.” The reaction was really good and we didn’t really feel the need to do that. We may throw in a few covers, songs that we’re into, but it’s not something that we’re into but it’s not really anything we really sort of felt that we need to do.”

Sandhu: “But I guess some people want to come and see Andy play, and obviously with his history with The Smiths, they may want to see him play those legendary basslines that mean a lot to a lot of people out there. So maybe we will. It’s up to Andy, really.”

Rourke: “For me lately, the priority is Blitz Vega and have people concentrate on that. Maybe in the future, I might do one Smiths song. We’ve not really talked about it. Definitely our prime focus is just Blitz Vega.”

Sandhu: “I’m not sure I could pull off Morrissey’s vocals to be honest (laughs)… I guess Andy would have to sing the Smiths tunes.”

Rourke: “Not going to happen.” (laughs)

Well on a brighter side though, Blitz Vega is a devoted project for both of you, but you’re both on different coasts. I believe, Andy, you’ve been here long enough that you’re a New York native practically, and Kav, you’re in Los Angeles. How does that work in terms of the creative process? Do you just e-mail your ideas back and forth?

Rourke: “No, not at all. Quite the opposite. I’ll just pay visits to Kav.”

Sandhu: “Andy comes over and I’m usually in the studio so he jumps in and we just go from there. We’re actually pretty spontaneous with the music and we don’t really spend too much time working on the same track or anything. We just kind of go with it, press record and try to capture what comes naturally really and then take it from there. And if it works, and if it doesn’t it doesn’t and so far, we’ve been happy with the whole creative process. It feels pretty good at the moment, so I guess that’s the way we’ll keep on doing it.”

Have a listen to the tune “Hey Christo” here:

Now that we’ve covered the possibility of touring and there’s the album, what else is coming up for both of you guys? Is there much life outside of music as well?

Sandhu: “Not really for me, I don’t think, not really. I guess just normal life. I don’t know. I love to cook, that’s about it. Nothing else. I think Andy’s pretty much the same. Aren’t you, man?”

Rourke: “Yeah, pretty much. I want to just focus on this project and make the best of it.”

Sure. So 2020, any New Year’s resolutions for either of you besides getting this album out?

Sandhu: “My resolution is for now, so, just focus on music and that’s it. Nothing at the moment.”

Cool. So, in closing, any last words for the kids?

Rourke: “Let the kids be alright.”